The lineup has been revealed for HYBE’s year-end concert!
On December 7, it was announced that 2022 Weverse Con [New Era] will be held at 9 p.m. KST on December 31 at KINTEX Hall. The concert will be held with an offline audience but will also be streamed online for fans around the world.
This year’s lineup includes HYBE Labels artists BUMZU, Dvwn, ENHYPEN, fromis_9, Justin Bieber, Lee Hyun, SEVENTEEN, and TXT. Justin Bieber will not be present at the actual venue but will showcase a performance virtually for global fans. For SEVENTEEN, members Jun and The8 will not be participating due to their activities in China and Korean self-quarantine regulations.
As BTS is on an extended break, they will not be joining this year’s concert. CR: Soompi
original post: here
1. I want to attend since Bieber is coming
2. It’s way better to have a solo concert online by themselves instead. Imagine how boring it is to watch singers you don’t care about..
3. Bieber?
4. Ah… I f*cking hate this
5. It’s up to you to decide if you wanna watch it or not but I’m fine as long as Bangtan doesn’t attend
6. Ah so I’ll just get to see Bieber on screen?
7. They said that Bieber will appear on a screen even if it’s an offline concert. They should give my bias their own solo concert instead. Joint concerts are so-so
8. Wow… they are doing an offline concert so what’s up with the hate? You guys don’t wanna go to offline concerts? What’s up with people calling it “Gayo Daejun”? Are you guys really idol fans?
9. Just let the people who want to attend attend. No need to get mad over this ㅋㅋ
10. Ddeuddo is from the same company?? Daebak, I didn’t know. What a shame to do it in this recent times (T/N: Koreans call Justin Bieber Ddeudo because of his tattoo – see ref. below. His name in Korean is 비버 but side-wise, it’s read 뜨또) 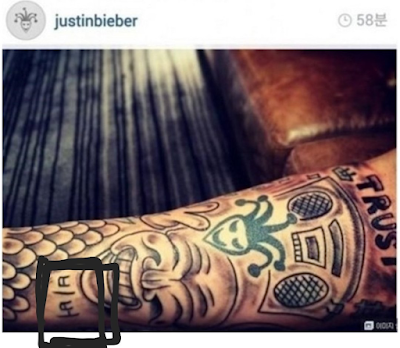