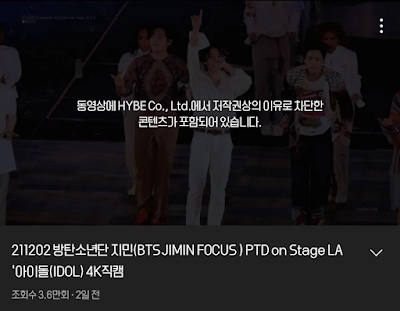 “HYBE Co. Ltd. removed this video due to copyrighted content” 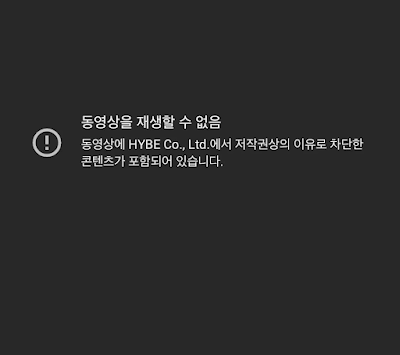 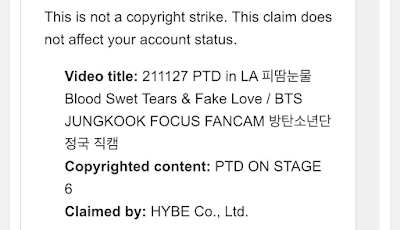 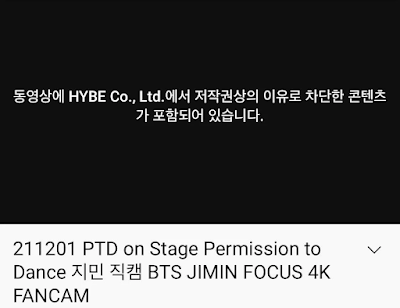 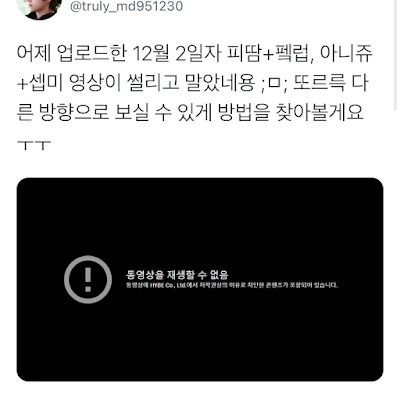 “The 12/2 Blood Sweat Tears + Fake Love, I Need U+Save Me videos that I uploaded yesterday got taken down ;ㅁ; I will try to find another way to show the content ㅜㅜ”
(Paraphrased)
Have they taken down fancams before? Hybe has never directly taken down videos like that. I’ve been a BTS fan for 6 years.
Is it full streaming that has a great negative impact on the economic activities of idol agencies? No, no there are a lot of big-name accounts who stream BTS concerts. Phone cams are permissible. It’s only recently they they put restrictions on full-cams but they’ve been allowing it for years. They’ve never touched fansiter masters’ fancams up until now
Is it because of the music? The older concert videos all included music and if you look at YT’s policy, the concert videos’ money goes to the copyrighted artist so Big Hit is the receiving end of the money. So I don’t think that music is the issue
Are they only taking down concert videos? No, Jingle Ball happened in 2019 and the video is still up. This is the proof that videos being from a concert isn’t the issue
Is it an issue of the UMG? Even if there were issues with the UMG, in the end, it’s HYBE and Big Hit that lead the decision. If copyrights were the issue, then all of the YT fancams would be taken down. Especially those people who just want clout and make vlogs of BTS concerts and who are not even fans, all these videos should be taken down. But instead, their videos are just left as is. The standards are just too vague
HYBE is taking down anything regardless of the member or fancam
The reason why Bangtan fans are mad – when the Bangtan fans were pleading Hybe to take down malicious YT videos related to fake-rumors made about the BTS members, fake news or about accounts inciting fans to quit the fandom, Hybe did nothing about it. If you search up the members’ names on YT right now, you can still see a bunch of malicious videos made about them. But Hybe doesn’t take down any of those but instead are taking down fansite masters’ videos
Big Hit/Hybe was always known for hating fansite masters
Other fancams are also being taken down
Big Hit, please stop!!
original post: here
1. Hul I still wasn’t able to watch any of their fancams yet…. this is too much..ㅠ
2. Why are they doing this? Seriously ㅋㅋㅋ it’s not like they are giving us other fancams either, f*ck
3. I’m curious as to when they are going to stop messing around like that
4. Hul I still haven’t watched any of those. Are they crazy? Seriously, they are only doing dumb things?
5. I downloaded the fancams as soon as I got the notification at dawn. What a relief ㅜㅜ
6. Wow so these stars who advanced to the global scene through YT are taking down all their YT videos. So are they gonna receive all the money now??? Impressive
7. So many people became fans through their fancams..
8. This is comedyㅋㅋㅋㅋㅋㅋㅋㅋㅋㅋㅋ
9. They don’t appear on Korean music broadcasts nor year end ceremonies so they don’t even have individual fancams, but they are even taking these down???? During Blood Sweat Tears, they were known as being “Jam-packed-sonyeondan” because there was so much fangirl contentㅎㅎ
+ I’m concerned about the fansite masters’ safety. Seeing how their videos are being taken down for copyright, foreign fans will have an even worse image of them
10. But are they ok with fancams of their other idols? Or are they taking down all fancams?
11. Hybe just treats their fans like trash…
12. Seriously, all the malicious videos on YT are still floating around ㅋㅋㅋㅋㅋㅋㅋㅋㅋㅋㅋㅋㅋ but the fansite masters’ videos are taken down
13. Hybe are f*ckers
14. What is Hybe doing? Why are they acting like fools?
15. F*ck, we are turning into the Japanese Johnnys