By the way, his debut fancam had 6.34M views 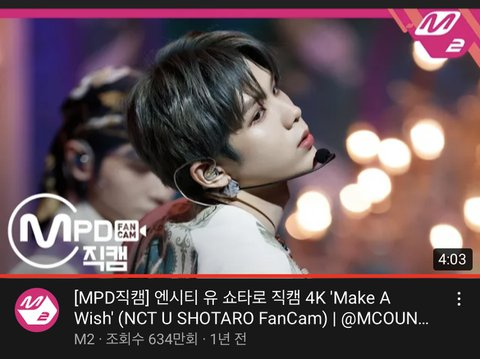 Ever since Make A Wish, he went back to the storage room. He appeared from time to time when he shot a pictorial and a self-made content but it seems like they awoken him againㄷㄷ

You can see it in his Insta story and he also said that he was very nervous on Bubble since it’s been such a long time since he promoted but when he’s on stage, you can tell from his expressions that he’s very happy. Please look at him prettily during this promotionㅠㅠ
post response:
[+82][-17]
original post: here
1. [+37, -1]
For real, I’m a fan of another group but Shotaro just stands out so f*cking much on stage. He stands out in a good way though. He’s seriously really f*cking good at dancing. He’s so good that his visuals don’t even get mentioned (T/N: meaning that he’s also handsome but people mention his dancing even more because of how good he is). So I end up watching his fancams
2. [+31, -1]
This kind of kid is what you call good at dancing
3. [+25, -1]
I don’t care about NCT but he’s seriously so good on stage so I end up watching themㅋㅋ
4. [+8, -1]
Shotaro is seriously so good

His dancing aside, every time I see him speak in Korea, I’m surprised at how fast he’s progressing. At first, I felt like his listening was ok but he was almost unable to speak but nowadays, although he’s still a bit awkward, he’s pretty good