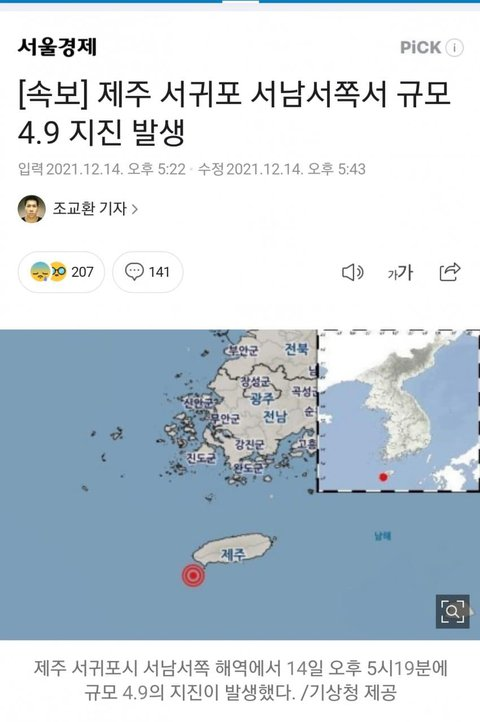 “[Breaking news] Jeju Seogui-po gets hit with an earthquake of 4.9 magnitude from the southwest” 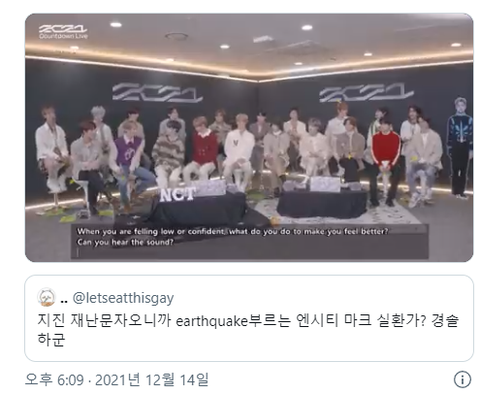 “Is Mark for real for singing ‘Earthquake’ when he received the earthquake disaster message? He’s thoughtless”

Just now, NCT had a live and received an emergency message because of the earthquake
And these were the members’ reactions
Doyoung – shouts out “earthquake!!!”
Mark – sings earthquake song
Jisung + someone – saying “yah yah yah yah!!” and telling them not to do it
Johnny – dancing
Sungchan – telling them not to do it
Are they crazy?
post response:
[+947][-57]
original post: here
1. [+375, -16]
It wasn’t even just one person doing this so what is this? They are seriously such airheads
2. [+353, -7]
Honestly, I saw this in real life and thought “they’re f*cked”
3. [+289, -43]
Doyoung, f*ck he started it
4. [+201, -7]
The other members’ expressions all hardened in real time… At least it was a relief that Jisung and Sungchan told them to stop
5. [+187, -8]
It’s true that they mocked it… There was even a bj who was doing a broadcast on the internet who put a “shocking” song when they heard about the Gyeongju earthquake a few years ago and went on the news…. but if idols do this, of course it will blow up even bigger.. I hope they become more careful ㅠㅠ Ever since that radio show back then, I became so anxious ㅜㅜ
[enter-talk] CLARIFICATION OF THE NCT EARTHQUAKE SCANDAL
1. The 23 members were on live and received an emergency message
2. The members were gonna move on thinking it was a Corona message but it turned out that it was about the earthquake in Jeju-do
3. Doyoung said that it was the title of their side song and started joking and it started from there
4. Mark started singing the earthquake song
5. Johnny even danced to the earthquake song
6. Jisung stopped Mark and the other members were telling them to stop with a serious look
7. The members wished people to be careful and stopped 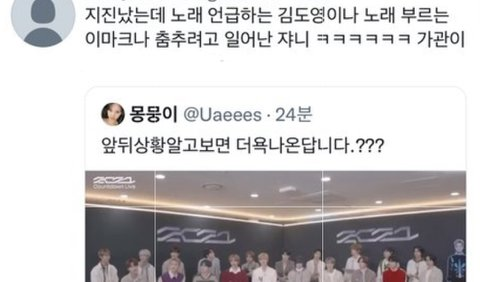 By the way, Mark also mocked DJ Young K before 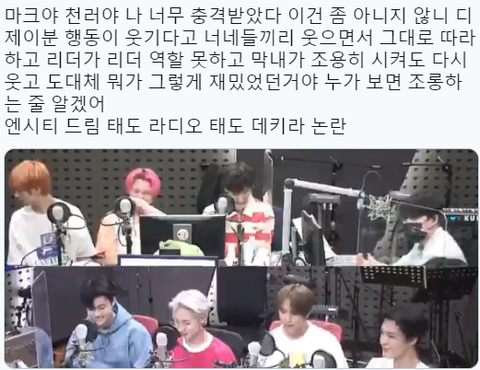 “Mark-yah, Chenle-yah, I’m seriously so shocked. This is not right isn’t it? You guys are laughing among yourselves thinking that the DJ’s gestures are funny while copying him. The leader can’t even do his role and even when the maknae quieted you down, you started laughing again. Just what was so funny? Anyone else watching this would think that you are mocking (the DJ).”
post response:
[+799][-57]
original post: here

Just how many times has Mark done this? Jisung stopped him both on the radio show and today. At this point, remove his leader title. It would be better if Jisung had it
2. [+312, -17]
He posted a temporary apology on his Insta story which is hilarious. What’s worse is that Johnny wrote it on a memo ㅋㅋㅋㅋㅋ f*ck
3. [+284, -7]
Even if you’re trying to bury this down, it’s already blowing up on other community sites… an article will be out for sure

1. What’s with their personalities?
2. Crazy… I seriously wanna curse at them
3. Them again…? Didn’t they mock the DJ on radio too?
4. Mark-yah… don’t…
5. Jisung-ah ㅜㅜㅜ
6. Jisung’s expression ㅠ the maknae also stopped them on radio
7. Uhm, they are airheads
8. Even so, it’s a relief that there were members telling them to stop
9. Let’s think a bit before acting
10. Ah… that Jisung kid suffered
[theqoo] DOYOUNG, MARK AND JOHNNY’S APOLOGY

“I want to say that I’m really sorry for the sight I showed on the comeback live today..

I couldn’t grasp the situation and I’m really sorry for the thoughtless actions I showed. I will reflect deeply and will work hard to not show this type of behaviour going forward.”

“I apologize for my careless action in our comeback live today. I will be more cautious and thoughtful before acting from now on. I’m really sorry. I want to apologize once again to the people who felt uncomfortable by my actions.”

original post: here
1. An apology that will disappear in 24 hoursㅋㅋㅋㅋㅋㅋㅋㅋㅋㅋㅋㅋㅋ
2. Story apologyㅋㅋㅋㅋㅋㅋㅋㅋㅋㅋㅋㅋㅋㅋㅋㅋㅋㅋㅋㅋㅋㅋㅋ this is seriously new…. if you didn’t see it within 24 hours, it’s like they never apologizedㅋㅋㅋ
3. Isn’t there a 24 hours restriction? F*ck…
4. Looks like their company won’t do anything despite the controversyㅋ
5. Set the apology timer for 24 hours, tik tok tik tok
6. I’m not even surprised anymore..
7. Apologizing via Insta story…???? They are so thoughtless. I’ve seen so many ‘Hot’ posts about their fans being a mess but their idols are not falling short either *shaking my head*
8. So if the fans cause a controversy, the idols will do it tooㅋㅋ a perfect match
9. Wowㅋㅋㅋ my face is blushing for them
10. Mark… he’s still so young. I liked him in SuperM though ㅠ
11. It reminds me of Block B.. the flood incident
12. Who puts their apology on Insta story?
13. Like fans like singers
14. This is new to meㅋㅋ an Insta story apologyㅋㅋ
15. NCT again… like fans like singers