I went to his fansite video screening (T/n: OP is proving that she used to be his fan)

I was also a subscriber in his Bubble (I left the fandom now and I’m not subscribed to anyone)
If you need more proofs, tell me.
I’ll be able to show some extent 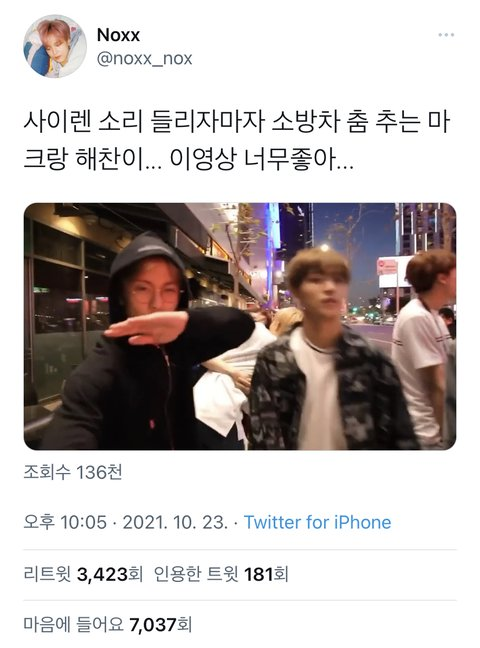 this isn’t something that happened recently, it’s when they went to Spain

They suddenly started dancing to Firetruck (127 song) when they heard the siren sound
The fandom never thought it was problematic
But to me, I’m still fascinated that this didn’t become problematic and nobody talked about it… I can’t understand the fan thinking this is something “nice” either..
Use your common sense… Siren sound means that there’s an emergency
So how can they think of doing something like that when they hear it?
On top of it, seeing them dance and singing along to an earthquake announcement makes me realize that they’re probably living in a different world I am
People who are able to read the room and have common sense will never act like that
Seriously maybe it’s because idols have such short amount of time learning about stuff, but as a human, I can’t understand them..
post response:
[+535][-72]
original post: here
1. [+222, -218]
To be honest, this is freaking obaㅋㅋㅋ Do you really think that they would know there’s an emergency just from a siren’s sound? They can blow the siren just from traffic rules violation too? At this rate you guys are just trying to drag them
2. [+129, -24]
Mark’s fans always blame people like Jungwoo, Haechan, Chenle, etc. for ‘tainting’ him and make tons of excuses for him for this reasonㅋㅋㅋㅋㅋ So he’s the one getting tainted? Your brat has always lacked common sense and mannersㅋㅋㅋㅋㅋㅋㅋ
3. [+121, -121]
Haechan never fails to be intertwined in every controversyㅋㅋㅋㅋㅋㅋㅋ Why is Ryujin even dating him… She’s f*cking losing
4. [+54, -37]
I feel like they just acted unconsciously here. Of course they need to be criticized for the earthquake incident, but this is nitpicking what they did. It’s not like everyone is in panic whenever you hear a siren, if they saw a firetruck or ambulance in front of them, I bet people usually just think ‘I hope there’s nothing wrong” and if you’re driving a car, you’d move around, since sirens are more common than earthquake news, aren’t people usually numb to it? This is just a stretch… I bet people are gonna call me NCTzen trying to defend them but I can prove I’m another group’s fan
5. [+48, -4]
People are here nitpicking OP’s post because of her example, but nobody said that sirens should be considered something to panic over?ㅋㅋㅋ  What OP is saying is that most people would probably just ignore the siren’s sound, but nobody would actually dance on it?ㅜㅜ  It’s true that their actions can’t be reasonedㅜㅜ Nobody is accusing NCT members of not worrying about hearing a siren? Why are the comments here turning them into the victims..
6. [+47, -1]
What’s up with Mark?