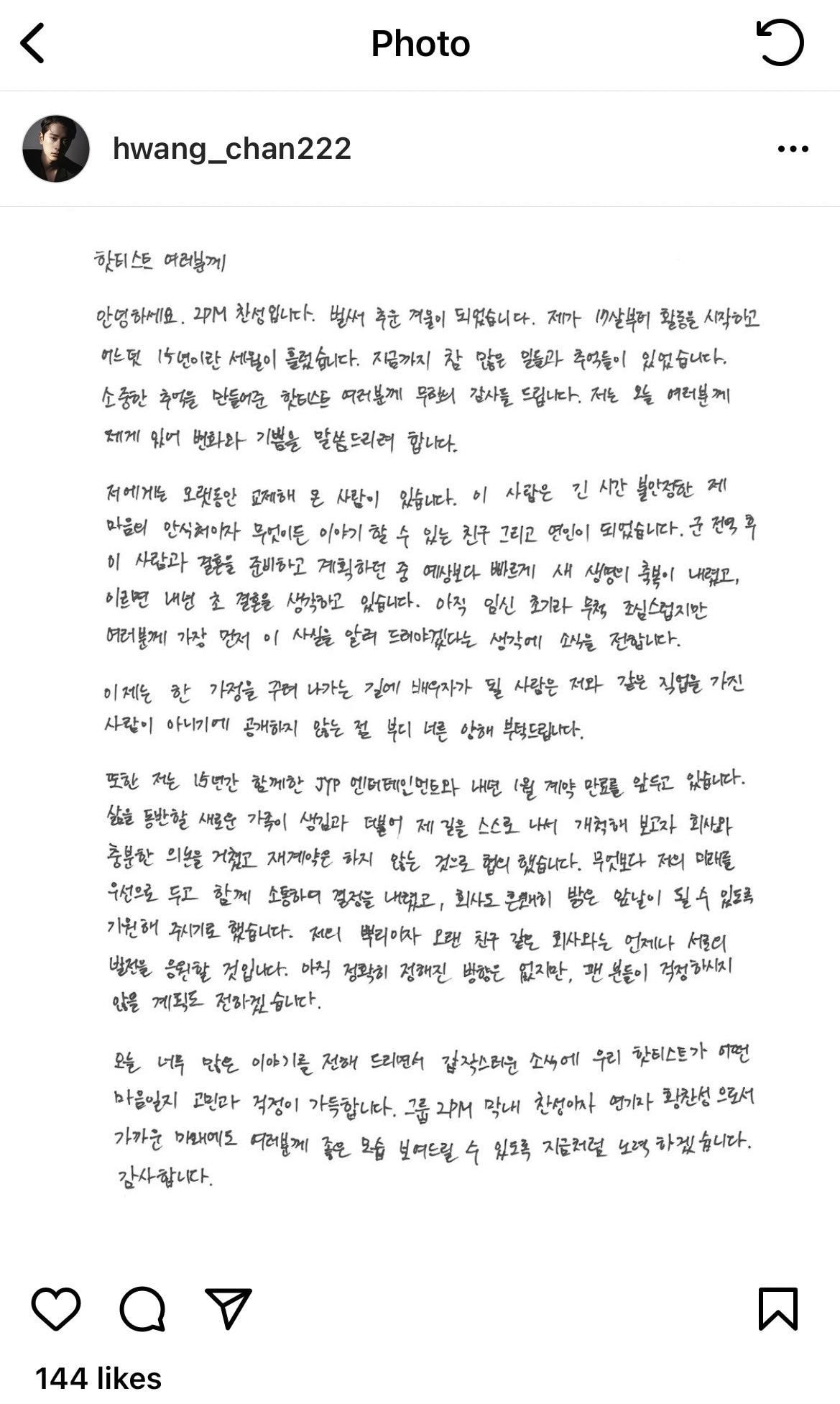 Hello. This is 2PM’s Chansung. The cold winter season is already here. I began activities when I was 17, and 15 years have passed already. A lot has happened, and there have been many memories. I express endless gratitude to HOTTEST who have created valuable memories. Today, I am telling you about changes and happiness in my life.

There is someone who I have been in a relationship with for a long time. This person has been the resting place for my unstable heart and a friend who I can share anything with for a long time, and she became my girlfriend. While preparing and planning marriage with this person after my military discharge, the blessing of a new life came to us earlier than expected, and we are planning to get married as early as the beginning of next year. We are very cautious as she is in the early stage of her pregnancy, but I am sharing this news as I thought that I should tell you first.

My partner on this road to creating a new family does not have the same job as me, so I ask for your generous understanding for not revealing her.

In addition, my contract with JYP Entertainment, which I have been with for 15 years, ends in January. I went through much discussion with the company regarding my thought to go down my own path along with the addition of my new family that I will continue life with, and we came to the mutual discussion to not renew my contract. The decision was made through communication with my future as the priority, and the company willingly gave blessings for my bright future. The company is my root and like an old friend, and we will always support each other’s growth. My definite path has not been decided yet, but I will share plans that won’t cause concern to fans.

As I relayed so much information today, I am concerned and worried about how our HOTTEST will feel at the sudden news. I will work hard as I am right now in the near future in order to impress as 2PM’s youngest member Chansung and actor Hwang Chansung.

Thank you.
Cr. Soompi
original post: Here
1. Congrats congrats. He’s already 32, until how old are you guys going to swear at him?
2. I guess Chen has opened the pandora box ㅋㅋㅋㅋㅋㅋ
3. Yet he calls his baby a blessing? I freaking hate itㅋㅋㅋ
4. I know that from a fan’s perspective, shotgun wedding is the worst thing ever, but from a society’s perspective, marrying the woman when you accidentally get her pregnant is the right thing to do. This doesn’t only apply to Korea, a lot of cultures share this practice too
5. Is it this hard for them to use a condom? What are they all doing?
6. Until when are idols getting married going to become the norm and people stop freaking out to the point of quitting the fandom? He’s not in his 20s, he’s already in his 30s so marrying someone because he got her pregnant is the right thing to do. It’s already hard for idols to announce being in a relationship let alone a wedding. I feel like until we normalize weddings among idols, we’re gonna get a lot of shotgun marriage
7. Why are shotgun marriages so popular nowadays?
8. Use a condom already, what’s so f*cking difficult about it?
9. I hope he won’t quit, I like 2PM as a full group
10. Use a condom before wedding
11. Ah… I’m so annoyedㅋㅋㅋㅋ Is it that hard to have wedding -> baby?
12. Wow aside from a few people, the majority of the 2nd and 3rd generation are all getting into shotgun weddingsㅋㅋ seriously the generations are changing and I bet the idol industry is going to change a lot too
13. Chen made idols’ fans head so strong that this doesn’t shock us anymore ㅋㅋ
14. Taking responsibility should be a given. Congrats
15. I just joined 2PM’s fandom recently and this is shocking.. Congratsㅋㅋ
[theqoo] 2PM CHANSUNG SHOTGUN WEDDING +  WEDDING IN BEGINNING OF NEW YEAR “BLESSING OF NEW LIFE”
source:https://entertain.v.daum.net/v/20211215133512728
Original post: Here
1. Congrats be happy
2. What the? There are still people power tripping over shotgun weddings???????
3. No but he’s already 30 and he’s been promoting for over 10 years. Until when are you guys gonna be stuck on him?
4. Why are male celebrities never using contraceptives? I can understand that from a society’s perspective, pregnancy is supposed to be a good thing, but why does it always come from shotgun weddings?
5. All of 2PM fans congratulate him. He’s always been giving his best during promotions. Of course he deserves to find his own happiness. 2PM Chansung everything will be fine fighting!
6. If he was already preparing to marry her who cares~ congrats
7. I bet the fans are still shocked but they were already prepared for 2PM to get married, congrats
8. You’re always going to have fans feeling uneasy about theseㅋㅋㅋㅋ
9. He’s at the age! Congrats
10. It’s a good thing. All I can say is congrats