– In the beginning, JYP wanted to make a group centered around Jun Somi
– Yuna wasn’t included in the lineup
– Ryujin who gained recognition through Mix9 was pivoted as the center and Yuna was pulled in 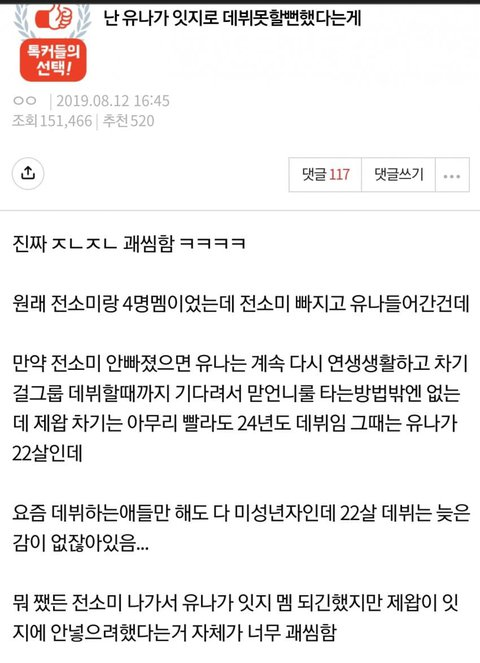 “Yuna saying she almost didn’t debut under ITZY”
T/n: paraphrased:
– The group was originally 4 members with Somi, Somi left and Yuna got it
– If Somi didn’t leave, Yuna would’ve gone back to training and debuted in the later group as the oldest
– However no matter how fast JYP releases groups, if Yuna debuted in 2024, she would be 22
– Everyone debuting lately are all underage, so debuting at 22 doesn’t feel too late
Next year, this would be the group that JYP will debut in March NMIXX 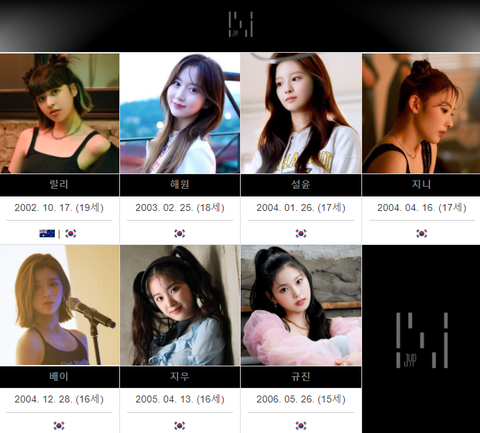 Personally, I feel like Yuna would’ve suited NMIXX better than ITZY
NMIXX members are all good with dance, singing and are all talented. JYP really sharpened their knives
With Yuna’s visuals in this group, they’ll seriously chew up everyone in the 4th generation, what a shame
post response:
[+551][-59]
original post: here
1. +449, -11]
I really hope that JYP’s new girl group doesn’t get the girl crush concept… I don’t know if saying it like that is too harsh, but JYP has that unique old-fashion vibe to them, so they don’t suit girl crush
2. [+330, -21]
I’m saying this truthfully, but with Lia’s school violence and after $$(?), their songs became so mad. It’s true that they’ve became idols that are kinda ambiguous. Personally, I find Shin Yuna the prettiest of the 4th generation idols, but she’s being buried like that. What a waste. Me too I wish she was in the next group
3. [+192, -12]
I know it can’t be helped since she’s already debuted, but it’s indeed a shameㅋㅋ  Imagine Yuna’s face in this, she’d fit in perfectly

Yuna would’ve suited this kind of concept with people of her age so well..ㅜ