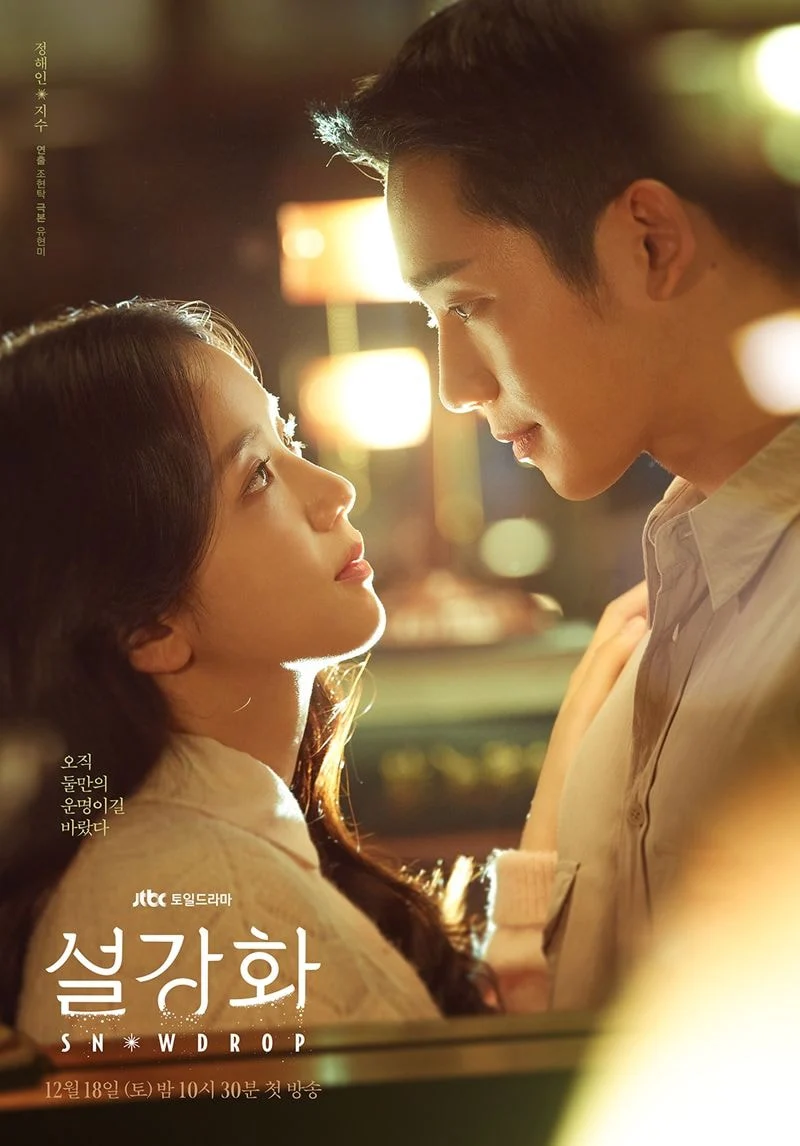 In response to escalating voices of criticism and protest against the new Sat-Sun drama series ‘Snowdrop’ starring Jung Hae In, BLACKPINK’s Jisoo, Jang Seung Jo, Kim Hye Yoon, Yoo In Na, and more, JTBC has released an official statement on December 23 to announce changes to the drama’s airing schedule for this week.
JTBC stated:
“Episodes 3-5 of ‘Snowdrop’ will be aired this week from December 24 (Friday) through December 26 (Sunday).
Episode 3 will be aired on 12/24 at 10:30 PM KST.
Episode 4 will be aired on 12/25 at 10:30 PM KST.
Episode 5 will be aired on 12/26 at 10:30 PM KST.
The controversy regarding JTBC’s ‘Snowdrop’ is ongoing. As is the standard with all on-air dramas, it is impossible to reveal the complete story of any series prior to the program’s airing, and this has caused a severe misunderstanding with the development of the first part of the plot. As a result, in order to relieve the concerns of our viewers, JTBC has decided to specially air the drama’s upcoming episodes early.
During episodes 3-5 which will be aired this week, the story will reveal why the male character Su Ho, a North Korean spy, was sent to the South, as well as his relationship to the unlawful power system, and why his character was guised as a student protester. The story will further reveal that the Agency for National Security Planning is the very organization which brings in spies from the North into the South, and the true struggle for power and money between the leaders of the North and the South will begin unfold during these episodes. The story will then go on to unveil how the young characters become irreversibly entangled in the secretive dealings between the powerful leaders of the two sides.
JTBC upholds the respect of all views and opinions. In order to pay heed to the views and opinions of viewers, JTBC is closely listening to the conversations currently taking place via the viewer discussion boards and various online platforms. We have chosen to go forward with this special early broadcast in order to resolve the ongoing issues raised by viewers. JTBC promises to continue doing our best in order to hear the voices of our viewers loud and clear, and to bring viewers good quality content in the future.
The variety program ‘Liberation Town’, which usually airs on Friday evenings at 10:30 PM KST, will instead be aired on December 25 (Saturday) at 6:50 PM KST.”
CR: Allkpop
original post: here
1. Looks like they won’t be able to broadcast this anymore so they are trying to air the things they filmed as much as possible. Stop being such a douche
2. I don’t wanna see any of these actors ever again
3. Oh they sure are still f*cking bullsh*tting ㅋㅋㅋㅋㅋㅋㅋㅋㅋ
4. They are calling this a “misunderstanding”. Just screw off from South Korea
5. They know that the possibility of getting this canceled is increasing by the day so they are trying to broadcast as much as they can. F*cking repulsive, f*ck
6. No but are these f*ckers crazy? They know that this is gonna get scrapped so they are trying to get everything out. F*ck, I’m getting goosebumps at how disgusting they are
7. Looks like they are doing this because it’s gonna get cancelled soon. Please scrap this soon!
8. At this point, I’m wondering if they will even air 12 episodes in one day. Anyways, they still have Disney+ as their OTT service
9. If they want to show everything so shamelessly, then reveal all the script and I’ll be understanding. Why must they reveal it through their videos?ㅋㅋㅋ
10. They claim that they respect all views and opinions but they never heard our feedback. They kept insisting that there was nothing problematic. Their words and actions don’t match
[theqoo] ‘SNOWDROP’ SPECIAL SCHEDULE “THERE IS A TWIST IN THE PLOT, WILL BE REVEALING EP. 5 IN ADVANCE”
original post: here
1. Before there is no more way back, stop everything
2. I’ll acknowledge you if you kill all the main characters in ep. 3, and then kill everyone who tried to interfered with the democratic movement (including the characters from the NSA). Then in ep. 5, admit that the media tried to defend the NSA.
3. Stop trying to provoke us, just scrap this
4. JTBC said “your opinion will change once it airs”
JTBC said “your opinion will change once you watch ep. 5”
JTBC said “your opinion will change once you watch ep. 10”
JTBC said “there will be a surprising and shocking ending, please watch the last episode”
5. Stop bullsh*tting, what are you gonna do about the f*cking head of the NSA? We told you to not do a f*cked up romance story with real historical people and historical events
6. Looks like they just can’t let go of that f*cked up NSA
7. Looks like ep. 3-4 will have contents that will anger us even more
8. They asked us to watch the first episode but are now on the way to ask us to watch the last episodeㅋㅋㅋ
9. Just don’t f*cking air it
10. 🤢🤮🤮🤮🤮🤮🤮🤮🤮🤮🤑