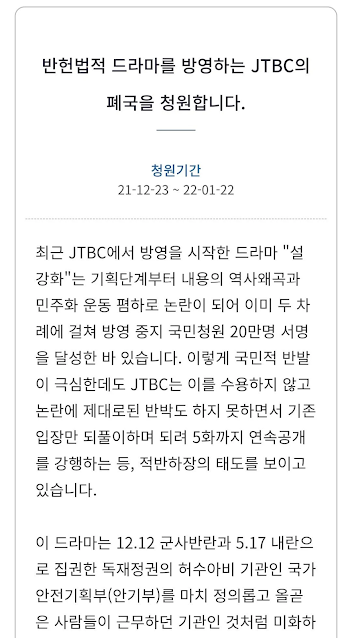 “We are petitioning for the abolition of JTBC, which airs anti-constitutional dramas.
The drama “Snowdrop”, which recently started airing on JTBC, has been controversial from the planning stage for distorting the history of the content and denigrating the democratization movement. Despite this severe public backlash, JTBC does not accept it and fails to properly refute the controversy, repeating its existing position and forcing the release of up to 5 episodes in a row, showing a negative attitude.
This drama glorifies the NSA, a scarecrow institution of the dictatorship that came to power in the 12.12 military rebellion and the 5.17 civil rebellion, as if it were an institution where just and upright people worked for, and distorts history that South Korean agents intervened in the democratization movement led by the Korean people.
(T/N: the petition talks about other problematic elements of the drama)
Now, the Republic of Korea is following the 6th Republic system established through the June 29 Declaration and direct constitutional amendment in 1987. This was accomplished by the people of the Republic of Korea themselves, and it was created through a nationwide democratization movement, not a system created by the participation of operatives sent to the South. To distort that the 6th Republic of the liberal democratic system was created by North Korean spies is to deny the Constitution of the Republic of Korea itself. In addition, beautifying the institutions created by the government that came to power through civil and military rebellion is also to deny the 1987 constitutional system and defend the forces that came to power illegally. JTBC, which broadcasts dramas containing these anti-constitutional contents, should not do broadcasting business in Korea.
When the comprehensive programming channel was launched in 2011, the cause that JTBC presented itself was the restoration of the former TBC Oriental Broadcasting, which was abolished by the military dictatorship, which JTBC itself has used for publicity since its opening. But now, airing a drama that glorifies the servants of the dictatorship that came to power by causing a civil war overthrows the reason for JTBC’s existence. Such broadcasters are not qualified to operate in Korea as broadcasters and should be shut down.”
Link to petition: https://www1.president.go.kr/petitions/Temp/zqVT5m
original post: here
1. Let’s goooooooo!!!
2. I signed it
3. Let’s go with the abolition
4. Ah but f*ck… if they are gonna broadcast that Xi Jin Ping drama after Snowdrop… f*ck… We’ll keep on getting stressed because of them. We really need to abolish them
5. Signed
6. Make your dramas properly a bit..
7. Please spread this. I don’t want any Chinese drama that distorts history anymore
8. Let’s go🔥
9. I just saw the JTBC Snowdrop Castle post. JTBC is so hopeless (T/N: see below)
10. It might seem a bit extreme but JTBC was even more extreme
[theqoo] JTBC POSTING ABOUT SNOWDROP CASTLE ON THEIR INSTAGRAM

“Shining Seunghye in Hosoo Female University, My Mel princess as target?!
JTBC didn’t recognize them at all ^_^
A special broadcast at 10:30 PM this week [Fri/Sat]
<Snowdrop> is a must watch!”
Seriously, they can’t read the room at all
original post: here
1. They are trying to threaten us
2. …???? Wow
3. They are saying “let’s go until the end”, f*ck
4. JTBC-yah, read the room a bit. Why are you acting like that towards the actors?
5. Seriously impressive… there’s no other solution than to get rid of them
6. They are really trying to fight with us

8. ㅋㅋㅋㅋㅋㅋㅋㅋㅋㅋㅋㅋㅋㅋㅋ just how much do they look down on the viewersㅋㅋㅋㅋㅋㅋㅋㅋㅋㅋㅋㅋwhy are they so shamelessㅋㅋㅋㅋㅋㅋㅋ
9. Look at them bullsh*tting with the My Mel princess and Shining Seunghye;;; they are getting these actors hate
10. Seriously, looking at them behaving like this shows that they don’t care