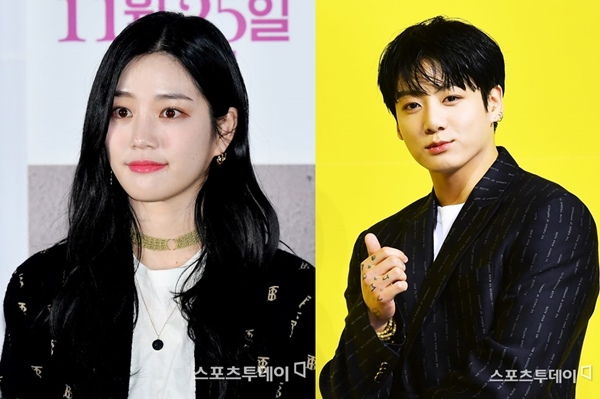 Actress Lee Yubi’s agency has released a statement regarding the dating rumors with BTS’ Jungkook.
Regarding Lee Yubi and Jungkook’s dating rumors, a representative from Lee Yubi’s agency told Sports Today on the 27th, “It’s unfounded.”
He continued, “I’ve heard of (about dating rumors) several times.” “I know that she is not close (with Jungkook). When I asked before, she said she only knew Suga.” He added, “When I asked (Lee Yubi’s dating rumors), she just laughed. She laughed because they were so dumbfounding.”
Recently, rumors of a relationship between Jungkook and Lee Yubi surfaced on YouTube. The YouTuber claimed that the two were wearing couple items and were using SNS that coincidentally overlapped.
Source: http://mstoo.asiae.co.kr/article.php?aid=76672040581
https://sports.chosun.com/news/ntype.htm?id=202112280100171780010723&servicedate=20211227
Original post: Here
1. Why are they even mentioning Suga?
2. It’s my first time hearing about this dating rumor
3. Why are they clarifying on some petty relationship rumorsㅋㅋㅋㅋㅋㅋㅋㅋㅋㅋㅋㅋㅋㅋㅋㅋ and what’s up with them mentioning Suga too?ㅋㅋㅋㅋㅋㅋ
4. Who is even Lee Yubi?
5. If she was really this dumbfounded, she could’ve just let it pass, to release an article about it just make it seem like she really wanted to say ‘I’m not dating him’
6. Just how many journalists called them that they had to release an official statement?ㅋㅋㅋㅋㅋ
7. A dating rumor that nobody has heard of ㅋㅋㅋ
8. Wasn’t Suga’s comment completely unnecessary?
9. What’s the point of even clarifying this?ㅋㅋㅋㅋㅋㅋㅋㅋㅋㅋㅋㅋㅋㅋㅋㅋ
10. Isn’t this the same Youtube channel V tried to sue?
11. The comment about her knowing Suga felt so unnecessary
12. Why do we need to know she knows Suga…? Because otherwise we wouldn’t believe she’s not dating Jungkook…? Freaking funnyㅋㅋㅋㅋㅋㅋㅋㅋㅋㅋㅋ
13. Since when?
14. Looks like they’re indeed not datingㅋㅋㅋㅋ since she knows Sugaㅋㅋㅋㅋㅋ (t/n: comment is sarcastic)
15. …? My first time hearing this