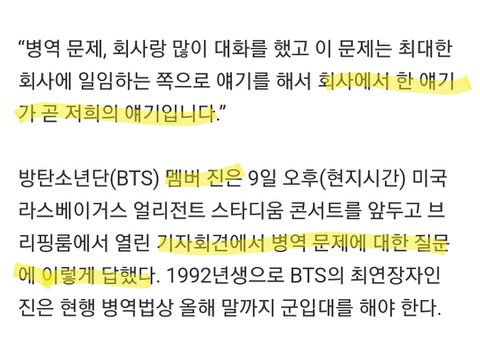 “[…] What the company said is also our opinion.” […] “That’s how Jin answered the question at the press conference regarding the issue of army exemption.”

The oldest member Jin said that he had had the same opinion as HYBE’s position
So you’re saying that you are having a hard time because politicians are telling you what to do?

“HYBE “BTS are having a hard time too”

Congress urges conclusion on military exemption”
He was caught uploading an Insta story of him playing golf and removing it right after?
What’s worse is that anyone can tell that what HYBE is doing right now is a political step but their fans are shielding them saying things like “don’t taint the members with politics”

“The retired senior executive of the Blue House went to HYBE, the agency of the group BTS. The Government Officials Ethics Committee made a decision on whether this administrator could be employed or not.”

“Earlier, Media Today reported in a report on the 8th that BTS agency HYBE planned a family tour and paid the cost of flight tickets, accommodation, and meals for 100 local reporters during the “BTS Permission to Dance on Stage” performance at Allegiant Stadium in Las Vegas from the 8th to 9th (local time).”
“They recruited a Blue House executive as their artists‘ general manager
And sponsored 100 journalists for their final desperate push. (T/N: OP uses the word “똥꼬쇼” which is used to describe a situation where you have to give in your final struggle while being pushed to a death end)” 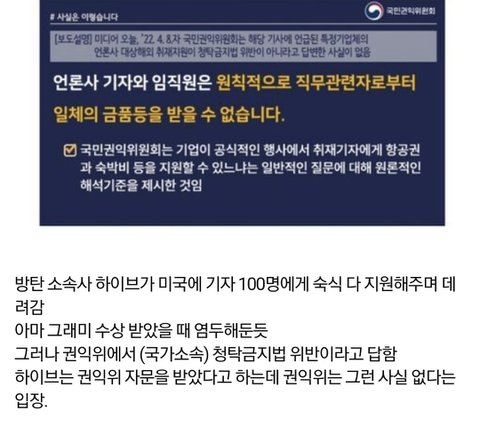 “(From the Anti-Corruption and Civil Rights Commission: In principle, journalists and executives and employees of media companies are not allowed to receive any money or valuables from job-related people.
Bangtan’s company HYBE sponsored 100 US journalists meals and lodging and brought them along.
They probably had that in mind when they received the Grammys
However, the Civil Rights Commission said that this was a violation of the law
HYBE claimed that they received advice from the Civil Rights Commission but the Civil Rights Commission made a statement saying that it wasn’t the case.”
Seeing how HYBE is ready to go this far, it wouldn’t even be weird to claim that they want an army exemption. But then, Jin even went as far as saying that what the company’s stance is on the army exemption = the members’ position so how long are you guys gonna shield the members claiming that they did nothing wrong?
You guys are annoyed to debate back and forth in the political world?
You guys are having a “hard time” because of uncertainties?
Then just set an enlistment date right now and this will clear all uncertainties so why aren’t you doing it?
You are not getting hate for wanting a military exemption for nothing

“Woo woo, we’ll be sure to go to the military when it’s time,
so all the bastards who tried to sell our name to freeload off us, shut up”
You are even writing lyrics like these and telling us to shut up
But why are you doing things that make us question your sincerity?
If you guys get exempted, just try to use Suga’s lyrics left and right and spread your double standards
post response:
[+661][-386]
original post: here 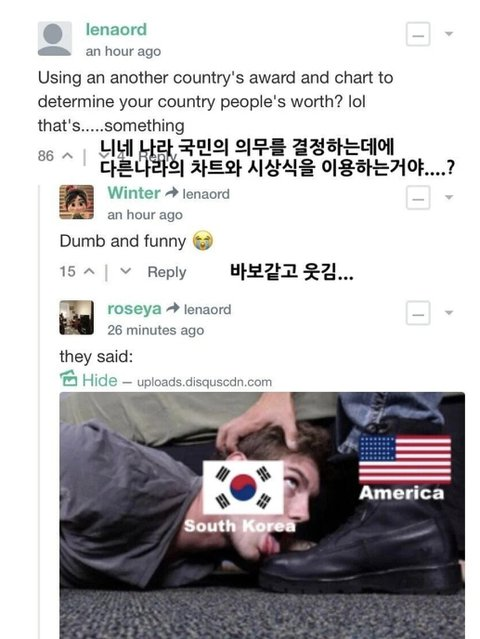 3. [+268, -51]
You Armys who don’t want to get the members hate, why did you insist that the members’ stance were different from HYBE’s? Ridiculousㅋㅋㅋ
4. [+138, -18]
Armys were claiming that their oppas would definitely enlist but even with how things turned out, they are still shielding themㅋㅋ you can tell that they are trying to media play so much with the army exemption. Change your fandom name. You sh*tty Armys who are even delaying their army enlistmentㅋㅋㅋ
5. [+137, -7]
Since you will volunteer to enlist even with an exemption, just enlist 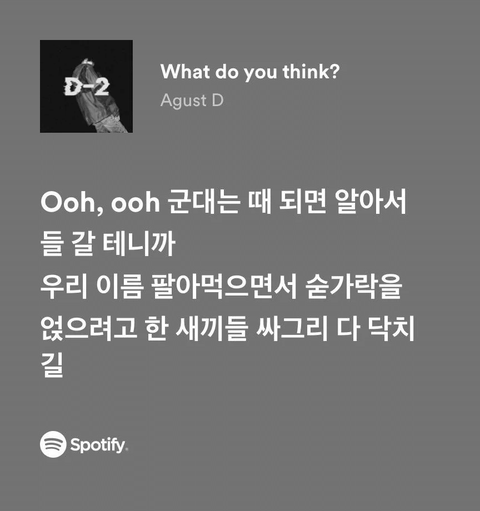 6. [+130, -5]
BTS said that they were having a hard time because of army exemption? Then they just have to enlistㅋㅋ
7. [+116, -7]
The BTS fans are like psychopathsㅋㅋㅋㅋㅋㅋㅋ don’t you guys know that Steve Yoo can’t even come back to the country yet?ㅋㅋㅋㅋㅋ this our country’s most sensitive issue
enter-talk