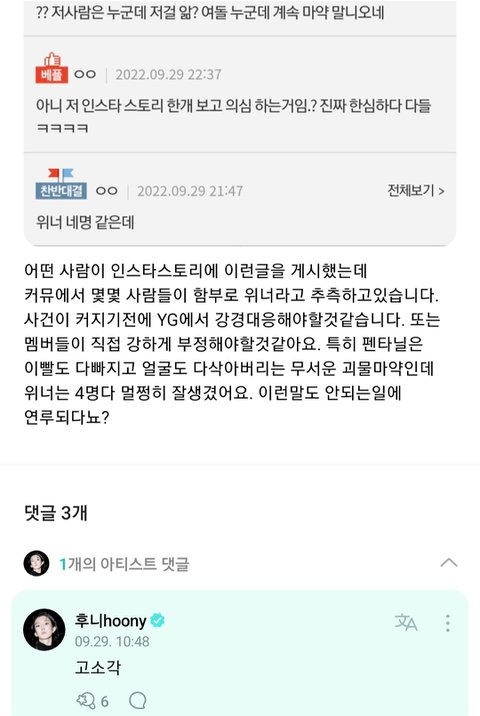 Comments:
– ?? Who are they to know stuff like that? Who are the female idols? Why there’s always talks about drugs?
– No but people got suspicious from that IG story..? Seriously people can be so lowㅋㅋㅋㅋㅋ
– I feel like it has to be the 4 people of Winner
Fan:
There’s someone who posted this on their IG post.
There are some people in communities who are going around saying that this is Winner.
Before this issue blows up, I hope YG can address this issue by taking strong actions. Also, I hope the members can directly refute these claims directly too. Fentanyl is expecially monstruous as a drugs because it makes your teeth fall and ruins your faec. Meanwhile, all 4 members of Winner are all so handsome. Why would they mix those nonsense with you guys?
Seunghoon: Pressing charges
post response:
[+94][-1]
original post: here
1. [+30, -0]
Thanks to Lee Seunghoon refuting this himself, he also indirectly cleared the rumors of the girl group in the 4th generation supposedly doing drugs, he’s freaking refreshing… Someone just now said that Jang Wonyoung was the one doing drugs because she’s Chinese and making some crazy claims. I hope people keep sending PDFs to Starsip
2. [+28, -7]
No matter how I think about it, there’s no way that any of Winner members is doing drugs. And of course I bet nobody in the 4th generation among female idols are doing it either. Those IG bugs are just trolls
3. [+26, -0]
I really hope he sues them for real, Winner is speaking kindly about it but I f*cking hate seeing this
4. [+24, -0]
Winner must’ve been f*cking dumbfoundedㅋㅋ They just ripped the Akaraka stage and randomly gets into drugs accusationsㅋㅋㅋㅋㅋ
5. [+17, -0]
So refreshing
enter-talk

[enter-talk] NO BUT TXT UGH