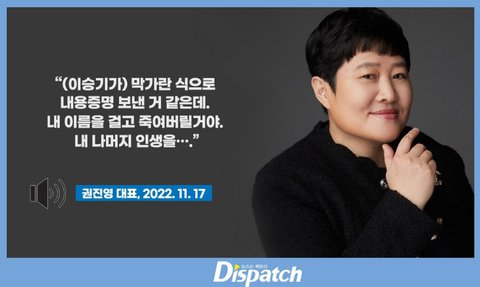 As previously reported, the entertainer requested certification of content for a transparent record of his earnings and payment from Hook Entertainment after the Severe Crime Investigation Division of the National Police Agency performed a search and seizure on the label. In the request, Lee Seung Gi is said to have claimed he never received any money from the agency’s music usage profits in the 18 years since his debut.
The story was eventually picked up by Dispatch, who released a more in-depth investigation into the conflict through an article titled ‘Music settlement, 0 won received… Lee Seung Gi, Hook’s 18-year slave.’ According to the article, Lee Seung Gi did not receive any music usage profit for any of the 137 songs he released over the past 18 years, and his current request for earnings records covers all 27 albums he released under the agency.
Meanwhile, Lee Seung Gi quickly rose to fame upon his 2004 debut, having enjoyed unrivaled popularity in the music usage market through the sales of ringtones, ringbacks, and Cyworld BGM, all of which were popular at the time.
Dispatch obtained the settlement statement for each distribution channel. From October 2009 to September 2022, the music revenue earned by Lee Seung Gi was 9.6 billion won (~$7.1 million). 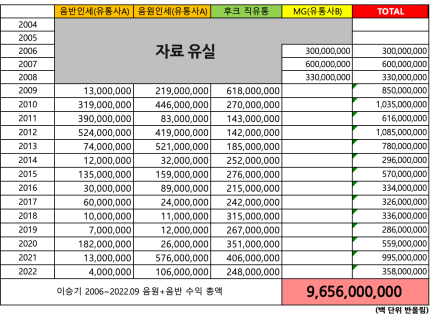 In the chart above, the first orange section shows the distribution company profits for both album sales and song sales, Hook’s direct distribution profits, and minimum guarantee (MG), displaying just how much Hook earned the company from 2006 – 2022.

However, the grey area indicates a five-year timespan where the agency’s accounting ledgers, which recorded Lee Seung Gi’s music revenue and expenses from June 2004 – August 2009, have disappeared. This makes it impossible to see earnings made during the time period some of the singer’s biggest hits were released, including 2004’s “Because You’re My Woman” and “Delete,” 2006’s “Please” and “Hard to Say,” 2007’s “I’ll Give You All” and “Let’s Go on a Vacation,” and 2009’s “Will You Marry Me.” 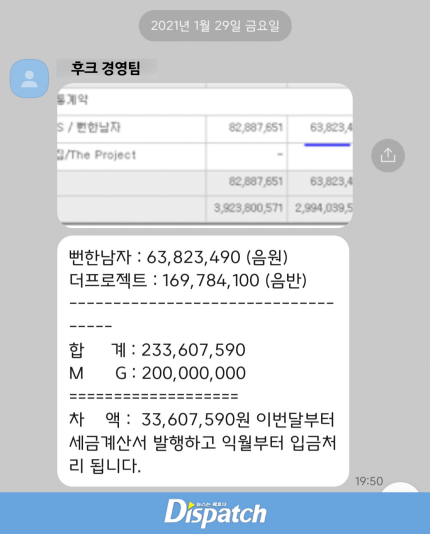 Later, Dispatch shared a message that a Hook Entertainment business team employee sent Lee Seung Gi back in January 2021, where they revealed song and album earnings for “The Ordinary Man” and ‘The Project,’ which were released at the end of 2020. Hook Entertainment’s profit was 33,607,580 won (~$24,800 USD).
In a later conversation, Lee Seung Gi talks to a senior music industry colleague, saying, “Hyung, I must have made money from the music sources too. Even after subtracting 200 million from MG, [Hook] received 33 million won.”
The senior responds with, “What are you talking about? How much is the copyright fee I get. You earned a lot, man. Haven’t you ever gotten a payout?”
Lee Seung Gi then answers with, “I haven’t. I heard I was a ‘minus singer’ [a singer who does not make enough profit for a payout].” To which, the senior says, “What are the terms of your contract with Hook? Why haven’t you even received a penny?”
Dispatch also released details about Lee Seung Gi’s contract, showing that according to the terms, 60% of the sales (6.5 billion won) from 2009 to 2016 and 70% of the money earned from 2017 to 2022 (2.9 billion won) should have gone to the entertainer, meaning he should have made 5.8 billion won (~$4.3 million USD) – not including the missing five years.
According to a later portion of the article, words Hook Entertainment employees said on different occasions regarding Lee Seung Gi’s profits.
One time, while eating dinner with the entertainer and his mother in June 2021, a company employee said, “Seung Gi! I don’t want to have to say something like this to a singer in our company, but… you’re a minus singer. How can we give you a settlement?” Another time, an employee in August 2022 seemed confused by the question, saying, “Do you know how much it costs to promote an album? Giving reporters gifts, buying things…” A third quote was said during a business meeting held after Lee Seung Gi filed his report this month, with someone saying, “So noisy! We [the accounting team] told Park [full name redacted] to prepare the settlement data. That crazy [redacted] didn’t want to work, so we didn’t give it to him.”
Dispatch surmised that the employees’ words were gaslighting. However, they also suggested that things will turn around for Lee Seung Gi, who created his own agency last year. In response to a message from his former Hook colleague that says, “Tomorrow is the most important shoot in the movie… I’m worried because it’s getting cold. Do well tomorrow,” the entertainer responded as follows:
“I heard through Manager Kim that [Hook Entertainment] CEO Kwon Jin Young was so angry that I requested certification of contents related to my music and said that he would risk his name and life to kill me without fail. There was no response for a year on the settlement statement, so it was an action taken to seek out my legitimate rights. How can he make such a threat?
It’s devastating that I, a hardworking 37-year-old, have to be intimidated and cursed at like an 18-year-old high school student. In the future, I would like to speak through a lawyer. Thank you for your understanding. And Manager Kim, really, sincerely worked hard for Hook. It’s me too, but it was not okay to do that to Kim.
Lee Seung Gi, Lee Seung Gi’s parents, Lee Seung Gi’s manager, Lee Seung Gi’s acquaintances. Kwon Jin Young CEO always ignored all of these people. I must muster up courage so that my people will no longer be ignored. If the CEO’s obscenity and threats mean I can’t be a celebrity, that would just be my fate. I don’t want things to get worse with the director. Please contact me through your attorney in the future.”
Cr.Allkpop
source: https://www.dispatch.co.kr/2227315
post response:
[+544][-8]
original post: here
1. [+582, -4]
No but Lee Seunggi can sit on ‘Because You’re My Woman’s wealth alone and be fine though?????????
2. [+456, -3]
Lee Seunggi is considered the nation’s younger brother, does it make any sense that he’s considered an underrated singer?
3. [+441, -43]
So they claimed to have lost the data during the moment he was the most successful so they didn’t pay him? The CEO is seriously doing everything so half as**dly, and she’s a woman
4. [+374, -3]
This is insane. They need to be jailed
5. [+289, -4]
I read the article and I’m shocked
6. [+256, -4]
Don’t you guys all remember when Lee Seunggi got hit with a dating controversy the moment he left Hook and got intertwined with all those negative press with the girl? And in the end, Lee Seunggi returned to that company. When this happened, I thought ‘this company must be no joke so he went back to them’, turns out, he was probably forcedly dragged back
enter-talk