original post: here
1. F*ck even I would be tormented
2. My heart hurts ㅠㅠ
3. Because of his mask, just how frustrated he must’ve been. It must’ve been so annoying..ㅠㅠ He suffered
4. Ha this season has just been a tormen t
5. Heungmin-ah ㅜㅜㅜㅜㅜㅜ
6. Heungmin-ahㅜㅜ The moment I saw him run around with his mask broke my heartㅜㅜ Please don’t get hurt ㅜㅜ
7. You sufferedㅠㅠㅠㅠㅠ
8. You sufferedㅠㅠㅠㅠ Please don’t cryㅠㅠㅠㅠㅠ
9. Sonie don’t be hurt ㅠㅠㅠ
10. The kids sitting at the corner of their rooms and hating are freaking not it. What are you guys doing as humans? ㅋㅋㅋㅋㅋㅋㅋㅋㅋㅋㅋ
[theqoo] [WORLD CUP] “I TRIED THE HEADER” SON HEUNGMIN “I’M FILLED WITH REGRETS FOR MY FANS… MY HEART HURTS” 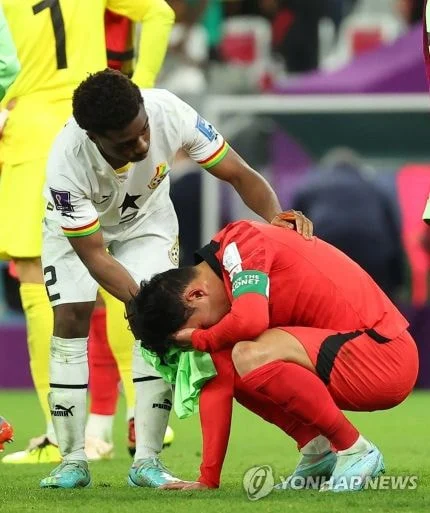 After the match, Son Heung-min said, “I don’t know what to say.” “The athletes all suffered, but I’m sorry that we couldn’t do anything but deliver this kind of results. To the fans who have been supporting, I’m filled with regrets.
On this day, he also wore a protective face mask and competed, saying, “I had to do well personally and lead the players well, but it hurts my heart that I couldn’t do that.” “I couldn’t ask for more from my teammates, and as team captain, I’m happy that they were able to do as well as they did now.”
Son Heung-min, who underwent surgery for an orbital fracture earlier this month, did not spare himself by attempting a header shot even though the injury had not fully healed yet.
He said ahead of the final game with Portugal, “I think the players will see the potential (for advancing to the round of 16), I think we prepared well,” and promised, “I will prepare well with the players.”
Heung-Min Son added, “I am proud of (Cho) Guesung’s good performance, but now all I can think about is that the result of the match is regrettable.”
original post: here
1. Stop feeling sorry, we’re so thankful for you!!
2. We should ban him from feeling sorry ㅠㅠㅠㅠㅠㅠㅠㅠㅠ And don’t try a header ㅠㅠㅠㅠㅠㅠ
3. Heungmin-ah you’ve done so much for us, why are you sorryㅠㅠㅠㅠㅠ You’re a big strength to us
4. You’ve been our strength and you’ve been so reliableㅠㅠㅠ Don’t get hurt
5. Apologies are banned
6. Why are you sorryㅠㅠㅠㅠApologies are banned
7. Apologies are banned for you
8. Heungmin-ah you did so wellㅠㅠㅠㅠㅠㅠㅠ
9. Why are you sorry!!!!!!!!!! Thank you so much for running around with a mask on, ever since that moment, we’ve been nothing but thankfulㅠㅠㅠㅠㅠㅠㅠㅠ
10. We’re fine. You should be banned from feeling sorry. And headers should be banned too ㅠㅠ
[theqoo] SON HEUNGMIN’S IG FILLED WITH HATE COMMENTS RIGHT NOW
T/N: there are more comments in the post, we will just translate the screenshots 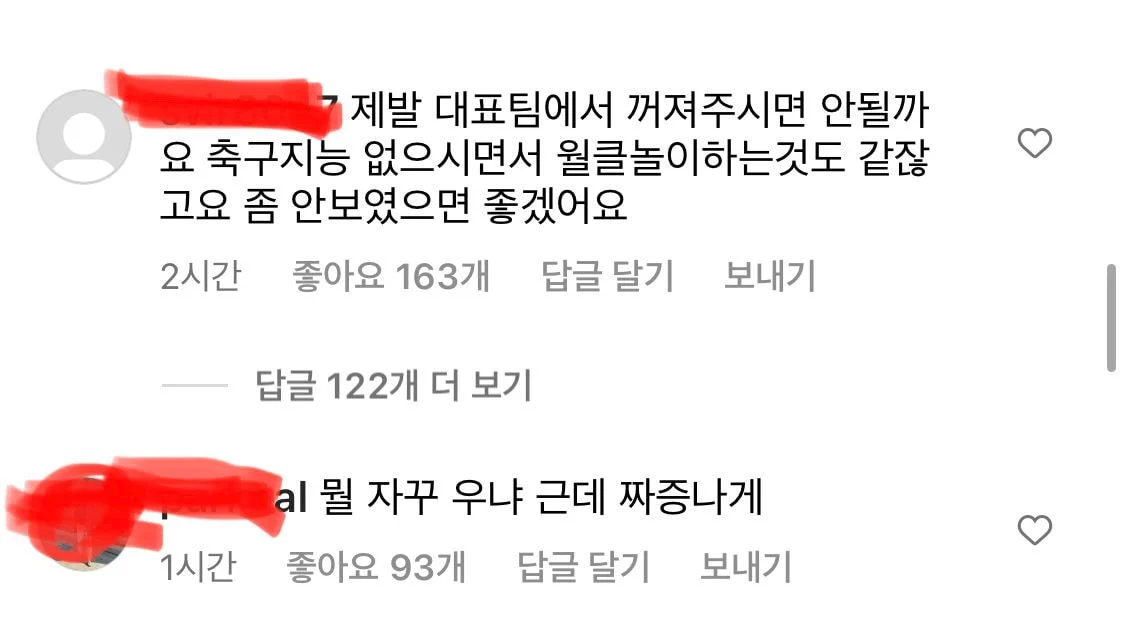 1. Can you screw off from the team captain’s position? You have no skills in soccer meanwhile you’re playing as if you’re some world class. I hope we stop seeing you

2. Why are you always crying? It’s getting annoying
3. Seriously disappointing
4. Please give your spot to another player before playing with Portugal
5. All you do is shooting ads…
6. Hyung, before Portugal, please just rest on the bench…
7. We don’t want to see you representing the country anymore. We hate seeing your annoying face
8. But why are you crying?ㅋㅋㅋㅋㅋ You didn’t show us anything, why are you crying
9. I seriously don’t understand why he claims to be the national ace~ Looks like he doesn’t know what a captain does, he’s the worst striker~
10. The Heungmin fangirls are already shielding him blindly
11. Do you hate scoring? … Should’ve used your left leg
12. Seriously just why aren’t they removing him? He’s so sluggish in defense. And he’s scoring in vain as if he was forced to do it. He’s always trying to appeal the referee and getting scolded by Kim Minjae.
original post: here
1. The jjinddas sitting at the corner of their room
2. Those crazy f*ckers, let me go leave some nice comments
3. Ah seriously why are they like that..
4. Can’t he sue them… Please sue them
5. ????? Why are they terrorizing Son Heungmin??? Huh???
6. Are they in their right minds…?
7. Sigh f*ck
8. Why are they acting like such losers
9. Hul those crazy f*ckers
10. Huh????? Why??????
theqoo