They recorded 2.11 million views and it was the lowest viewership historically

Isn’t this lower than Bangtan’s V-live views?
post response:
[+111][-4]
original post: here
1. [+63, 0]
Apparently, the seats were empty… Bangtan were always receiving awards and they got rid of their award so serves them right
2. [+55, 0]
To be honest, Bangtan kept on monopolizing the chart and they were so busy trying to get rid of them which was ridiculous. Serves them right
3. [+44, 0]
Yes… this is the real deal.. 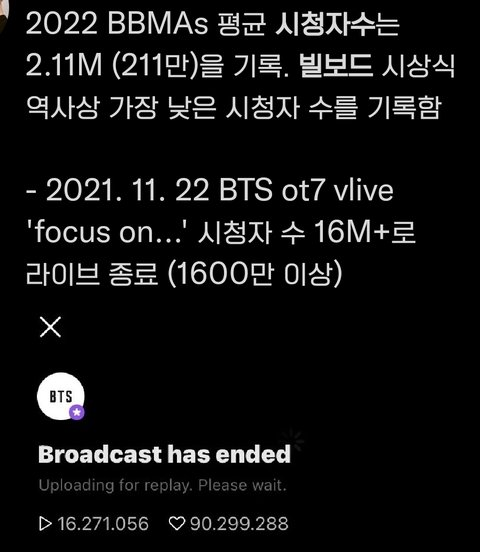 I thought that Billboard had a good relationship with Bangtan because they gave them awards but seeing the comments, it seems like it wasn’t the case?.. so is that why they didn’t participate? Even if they didn’t participate, I think that it’s impressive that they received 3 awards…
5. [+9, 0]
No but even the foreign top singers didn’t attend this time?? Is it because the BBMAs aren’t a famous awards ceremony? The views dropped that low because Bangtan didn’t go?
enter-talk