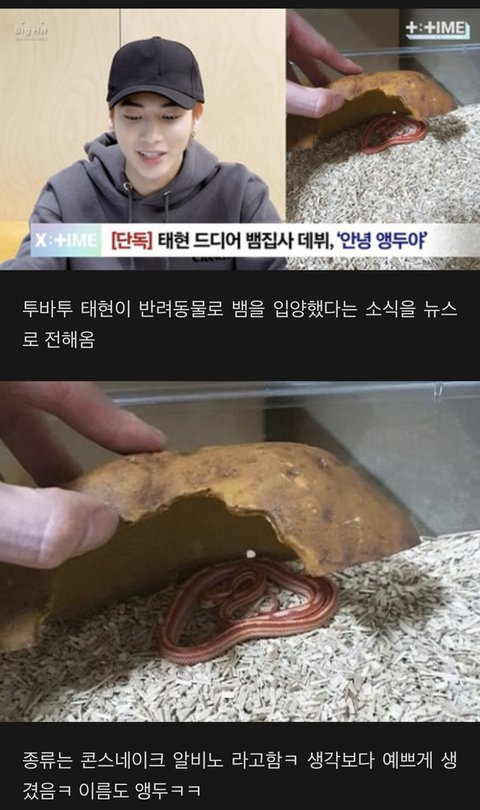 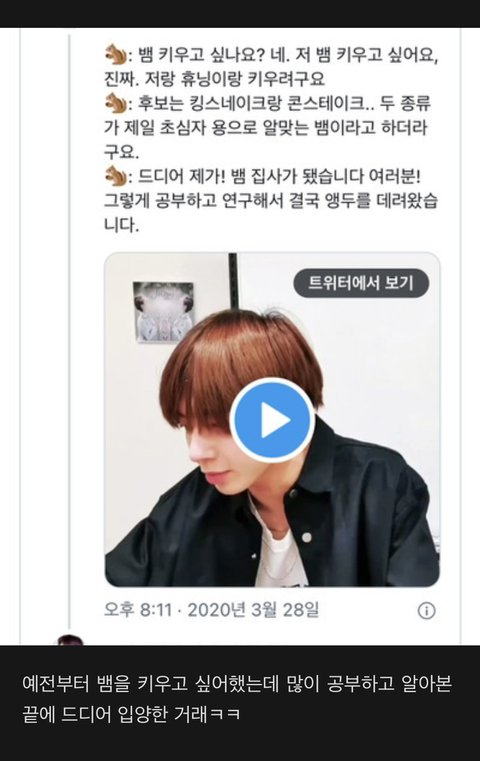 TH: “Do you want to raise a snake?” Yes. I want to raise one for real. Me and Hue Ning Kai will raise it
TH: I was debating between a king snake and a corn snake.. Both species are good for novice snake owners
TH: Finally everyone! I’ve became a snake butler! I was studying and researching it, and in the end, I’ve taken Aengdu home.
He said in the past that he wanted to raise a snake, he studied them a lot and in the end, he finally adopted oneㅋㅋ 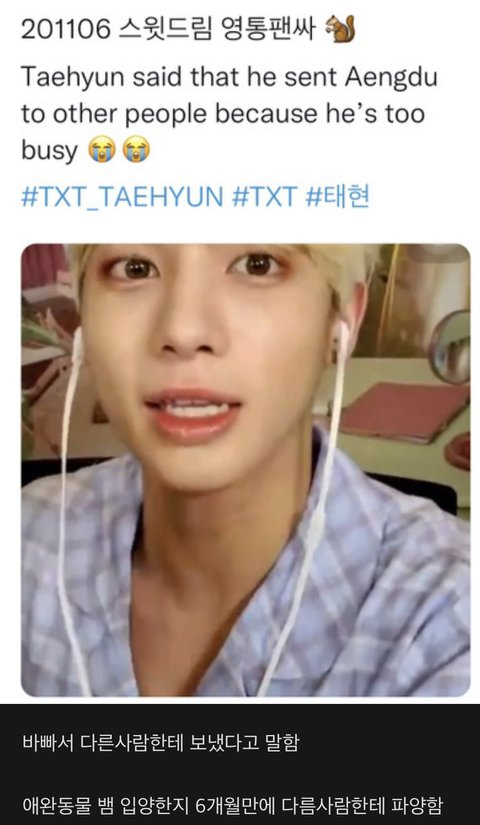 He was too busy so he sent it to other people
He only adopted his snake for 6 months and gave it away to adoption again
post response:
[+610][-101]
original post: here
1. [+390, -27]
And he couldn’t foresee that he would get busy and still went ahead to adopt??ㅋㅋㅋ
2. [+358, -28]
To the people below saying “as long as the snake meets a good family~” are seriously dumbfounding. Then pets like puppies can just meet a good family and you can give them away to adoption as you want? No matter how you debate that snake don’t have feelings, he’s still irresponsible for adopting it and this is fact
3. [+342, -26]
I get disgusted by people who adopt and then resend their pets for adoption
4. [+221, -9]
What a sight seeing how young people commenting here are. Why are people focused on whether snakes are able to feel emotions or not? The debate should be about how he didn’t even recognize how busy he would get and went ahead to adopt it for 6 months only just to give it to adoption for other people no? Why are people always debating beside the point and talking about the snake’s feelings or whatnot and about this being okay as long as the snake finds a good family….
5. [+153, -5]
If you look at Moa’s comments right now, they’re all claiming ‘snakes don’t have feelings, they won’t get hurt~ this already happened long time ago~’ so that makes it okay…? So it’s okay to adopt a living being and give it back to adoption as long as they have no feelings? And if this happened a long time ago, we pretend it never happened? Damn
6. [+111, -3]
He does seem more busy right now than he used to be but isn’t he raising his hedgehog just fine? Meanwhile these pets require way more maintenance than reptiles… Unlike dogs and cats, reptiles are often sold for re-adoption so his excuse of being busy is a bit weird. Choi Soobin is raising his hedgehog alone just fine no?
7. [+81, -14]
I thought that he would be more sharp knowing how busy his schedules are, but he’s unexpectedly
enter-talk