I don’t know anyone from MonstaX aside from Shownu and Im Changkyun, but that red heart…. It feels like you’re forcing him to be a #2nam (T/N: 2-beon-nam, knets call men who support Yoon “#2-man/#2-men” because he’s the 2nd candidate. Red is also associated with conservatives and blue with democrats)

post response:
[+286][-79]
original post: here
1. [+149, -9]
No but if he was really out of his mind, he wouldn’t just leave a red heart and go to sleep without thinking much, wouldn’t he make it even more obvious with his votes? Seriously we should stay neutral when it comes to people voting..
2. [+136, -12]
It was f*cking forced, and if he says something, people will accuse him of finding excuses next. I feel disillusioned just looking at the response from his official fancafe
3. [+116, -10]
And if he tries to explain himself saying that wasn’t his intentions, people will twist his words, he can’t open his mouth..ㅋㅋㅋㅋㅋㅋㅋ  You guys are just interpreting anything the way you want and then if he tries to defend himself, you’ll think he’s trying to provoke you with words ^^ But I seriously don’t see anything problematic with this.. Imagine how dumbfounded he must be
4. [+63, -1]
In what world are fans quitting a fandom over their oppa leaving a red heart? They must really be empty brained bugs
5. [+50, -0]
No but honestly, how many times did they emphasize that idols shouldn’t meddle with politics talks but now they’re the ones who are smearing idols with politics f*ck. There are so many antis of MonstaX nowadays, is it because their fandom is getting bigger too?
[enter-talk] BUT I FEEL LIKE MONSTA X’S MINHYUK’S INTENTIONS WERE TRUE
He always f*cking obsesses over using blue hearts usually and most of the things he posts/wears are blue, it’s almost official that Minhyuk’s official color = blue
Minhyuk rarely posts on “Minhyuk hour”, but this time he randomly just posted it on Minhyuk hour (t/n: idols/fans usually post stuff like “I love you” during their birthday date converted to hours ie) august 5th –> they will post at 8:05),
People who say “We need to stay neutral for idols” meanwhile these people clearly know how sensitive people can get over what they post
So the fact that he chose this time of all time to post it makes his intentions clear no?
post response:
[+195][-353]
original post: here
1. [+174, -5]
Yet when we say, he’s always posted red hearts too, people will bash us to death. People are going around spreading those twisted facts that he only uses blue hearts, so you’re telling me that if he uses blue hearts, it means he’s definitely supporting the democratic party? So everyone who uses the blue heart supports the democratic party?
2. [+145, -4]
Please just leave the fandom
3. [+96, -7]
He doesn’t even use that many blue hearts, he just did this thoughtlessly, isn’t it way too forced?
4. [+57, -0]
But he took a picture in front of a blue arrow, so he’s a #1nam now? Seriously cut it down already 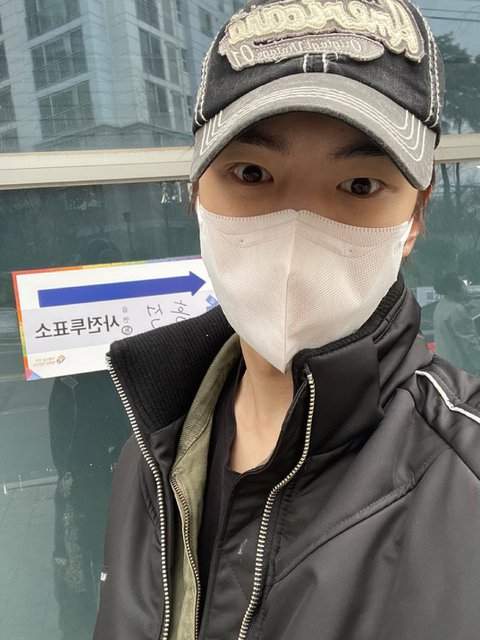 5. [+49, -0]
The fact that you wrote “He always f*cking obsesses over using blue hearts usually” proves you’re not a fan ㅋㅋㅋㅋ The ones who use blue hearts isn’t Lee Minhyuk but the fans
enter-talk