It was during their comeback ceremony live broadcast

There was a hate comment saying “MARK OUT PLEASE” (Mark-yah please screw off)
Haechan just said it like that to Mark.
The atmosphere suddenly got stiff and Mark said “Let’s read Haechan’s hate comments too” and  lowered his head right away. F*ck this is upsetting 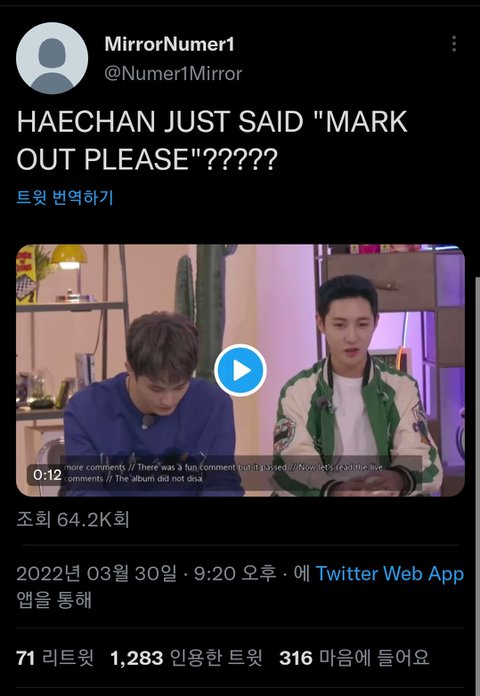 post response:
[+59][-71]
original post: here
1. [+97, -10]
I feel like maybe they wrote is like how Running Man say “Seokjinie OUT”… I can understand the fan’s intention for writing this, but what’s up with the swears..
2. [+73, -65]
Haechan has been crossing the line lately, he’s also acting pushing the business gay act to Renjun and makes the fans uncomfortable, but doesn’t even think about the fans. After his relationship rumors with Ryujin got out, he became worse f*ck
3. [+70, -46]
Mark should fix his hand manners first. Mark fans, why are you guys staying quiet on this?

4. [+55, -5]
Isn’t it the same when Haechan says “Mark aegyo please~” “Mark sexy dance please~”?? He’s just doing that as a joke but since Mark is Canadian, he reacted seriously to this
5. [+54, -9]
This is why I hate individual fans. Haechan said “Mark Out please” meaning “Mark-yah get out” as a joke and tried to be funny but Mark is a Canadian so of course he would think that Haechan is trying to tell him to screw offㅋㅋ If you looked at the video, even Jaemin who’s good at English couldn’t control his expressions and you can tell he didn’t like what Haechan did too. Meanwhile, the rest were all “ㅎㅎ” while you have Chenle trying to laugh out loud to cover the awkward atmosphere. If you claim to be an NCTizen and you can’t understand what just happened, just leave the fandom. I f*cking hate people trying to involve their own emotions in this
6. [+45, -5]
No but of course depending of who you are, you can interpret the “Mark out” comment differently. Mark who lived in an English country interpreted it as “Screw off” and he got serious about it, meanwhile Haechan said it as a joke no? Just like how in Running Man, they always say “Ji Seokjin out” “Ji Seokjin out” and NCT Dream are known to say stuff like “XX aegyo please” “XX sexy dance please” Mark said “Haechan sexy dance please” so Haechan replied with “Mark out please” to hit him back no?
enter-talk