When male idols win #1, they get dragged by people asking who are these nobodies and why are they getting awarded and saying that they are living in their own world. I’m so mad

Is there no way out for male idols?
I’m not talking about rising in the charts by streaming their songs but is there a way for them to truly have their songs acknowledged and rise on the charts? ㅠㅠㅠ 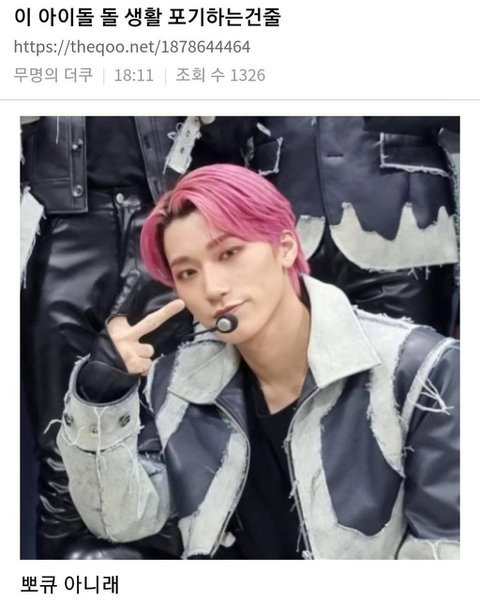 “I thought that this idol gave up on his idol life
They said that it wasn’t a ‘f*ck you'”
post response:
[+84][-33]
original post: here
1. [+324, -12]
But for real, 95% of their songs are all the same and suck. And there’s no reason for the general public to work hard to find the 5% good songs out there. Also, from the entertainment’s perspective, even if the general public doesn’t listen to them, they are earning good money from overseas money so they just keep on making songs like that
2. [+269, -3]
But to be honest, aren’t their songs only good in the fans’ ears? The fans say among themselves things like “the beat smells like money” and whatnot but to the public, it’s just messy and noisy …ㅠ
3. [+205, -162]
But even if male idols come out with good songs, they won’t listen to them because of their prejudice so…ㅋㅋㅋㅋ
4. [+112, -25]
But honestly, starting from the 4th gen, almost all their songs suck
5. [+111,-2]
They are stuck in their worldview that only they know so they’ll be fine as long as they stop doing that
6. [+105, 0]
If you look at Shine, Love Scenario, Rooftop, etc., as long as their songs are good, they’ll hit big… Even if I don’t know if it’s still the case now, it was at least like that in the recent years
7. [+90, -1]
First of all, when I see them with their eye makeup, while staring fiercely into the camera, I just cringe and end up switching channels
enter-talk