There’s a blind item that is going insane right now; The building was shaking and some days ago, even the windows cracked. Now even the floor is becoming bumpy and there’s a crack in the floor… What are they going to do ? 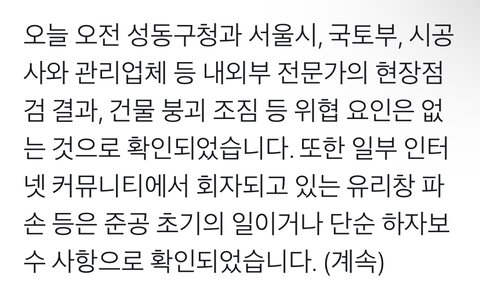 Today, in the morning at Seongdong district, Seoul. From the results of on-site inspections by internal and external experts such as the Ministry of Land, Infrastructure and Transport, contractors, and management companies, it has been confirmed that there are no threats such as signs of building collapse. Moreover, a part of the internet community made a buzz over window glass. Damage to windows was confirmed as being either something that happened during early completion or simple defect repair.