post response:
[+580][-3]
original post: here
1. [+249, -0]
If I were an official in Hybe or Source Music, I would’ve sent her out in an instant… Just what’s so believable about her that they’re not letting her go?
2. [+217, -0]
Once you appear on society’s news you’re overㅋㅋㅋㅋ (t/n: society/social 사회 news is usually used for major events like politics, celebrities news are usually lumped under ‘entertainment 연예’ news)
3. [+194, -0]
If they find out that Kim Garam’s school violence accusations are real, Source Music will get f*cked over
4. [+63, -0]
This is the shortest amount of time in idol history someone was able to get on the society news
5. [+63, -0]
At the rate even the journalistsㅋㅋㅋㅋ 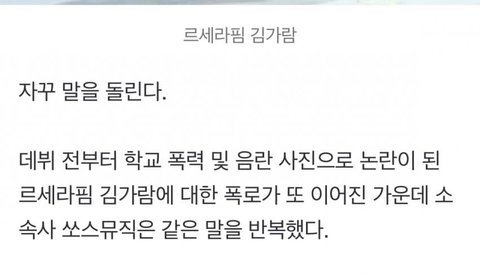 “They keep changing their words.
Amid another revelation about Le Sserafim’s Kim Garam, who was controversial with school violence and obscene pictures even before her debut, Source Music repeated their words again.”
6. [+55, -0]
The proofs keep on piling up but the company keeps changing subjectㅋㅋ
7. [+49,- 0]
Hybe is seriously power tripping shutting their ears and only believing what they want to believe
[enter-talk] KIM GARAM IS THE YOUNGEST IDOL TO APPEAR ON THE NEWSㅋㅋㅋㅋ
Kim Garam broke the record of the youngest idol to make it to the society news 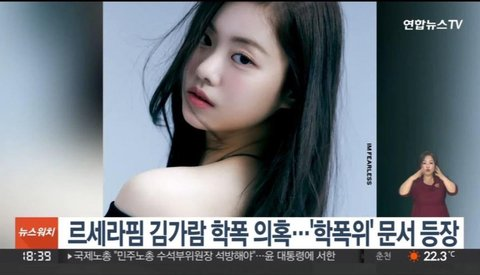 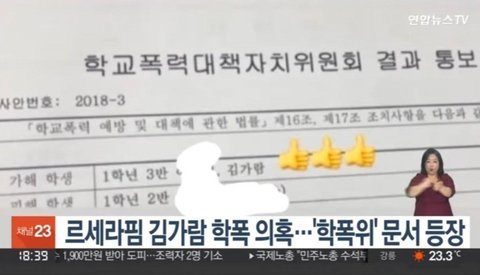 – STOP FREAKING DEFENDING HER!
– The evidence against her is overwhelming. I don’t even know why hybe is shielding her so much when she’s not bringing much to the group anyways. If anything she’s just dragging down the other members. Miss garam’s gotta go 😐
– How does a bully deserve to stand in the spotlight？

– idk tbh. I’m very suspicious of hybe protecting garam because there is NO WAY someone will risk getting in legal trouble source music better give a better statement!!
– For garam fans
Forgery of official documents is serious criminal offence in Korea. If someone do that he or she’ll be in jail under 10 years. There’s no way to replace prison sentence with monetary penalty. No one forge the official documents just to ruin idol member’s life.
just curious, is there someone who would risk their “life” in order to made someone looks bad? cause this is really some legal sh*t going on here
you can literally go to jail for falsification of official documents AND the school can sue on top of that plus hybe also suing. stop bending backwards to defend this girl you don’t even know.
AGAIN, Forgery of Official Documents is considered a serious crime in Korea and defamation of spreading fake information through forgery of official papers is a more serious crime. I don’t think anyone would dare spread a fake like that. Be prepared to accept the truth.

– The bully one
– Phoenix 1 day ago (edited) Its hard to trust any declaration from this company from now on. So many evidences indicating she’s a bully why still trying to cover things up? Your credit is more expensive than the sunk cost of her to leave. She doesn’t deserve any fans as long as people have conscientious. So mad for other innocent girls in the group.
post response:
[+217][-4]
original post: here
1. [+53, -0]
“Bully” ㅋㅋㅋㅋㅋㅋ Freaking funny (t/n: the way Google translated ‘bully’ to hooligan)
2. [+50, -1]
Can you remove her face from the postㅠㅠ I don’t want to see her
3. [+21, -0]
Can you mosaic her ?
4. [+21, -0]
Usually, I-roaches will seriously shield anything
5. [+17, -0]
The translation machine is so honest it’s so cuteㅋㅋㅋㅋㅋㅋ What about the bully?
6. [+6, -0]
There are still lots I-roaches’ tweets claiming that all this was fabricated and are shielding her
enter-talk