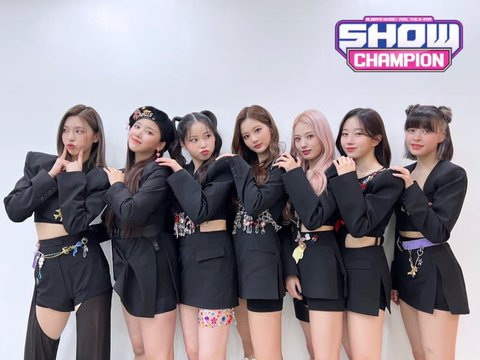 The full group shot from Show Champion just now
She used to stand at the end during their first week of broadcast
But they must’ve gave her the center seeing how she got the most attention
post response:
[+109][-8]
original post: here
1. [+86, -74]
But why is that girl with the pig tails always standing around the center? The other kids’ visuals are much better
2. [+83, -2]
No but if they put them in that position before, doesn’t it mean that they didn’t expect Sullyoon to blow up? But anyone can tell that Sullyoon’s visuals are the best no? Everyone is going after JYP saying how they pushed Sullyoon to the side but seeing how they changed their position, it seems like they didn’t expect her reactions
3. [+68, -1]
Personally, this formation has that flower garden effect so I think it’s good
4. [+35, -1]
Visuals aside, if you think about this group’s concept or color, Jinni fits the center the best… It was a shame that Sullyoon was that much on the side but I hope that these two would be centers like Kar-Win.
5. [+24, 0]
Wow but isn’t this too cruel?ㅋㅋ they just suddenly put her in the middle like that… it makes them look thoughtless. Putting her as the center for the next album would’ve been enough
6. [+20, -4]
But personally, because of Sullyoon’s height, I feel like all the attention gazes will go straight to Sullyoon so I think that she would be perfect if she stood right next to the center. Personally, I think that Jinni is the member that represents the identity of the group the best like Nayeon and Ryujin. The ideal thing would be having Jinni as the center and Sullyoon and Kyujin on her sides
7. [+17, 0
These two are both ’04 liners, are roommates and both have crazy faces. Let’s push SullyoonJin