NCT127 had a Japanese fan meeting and the day before the fan meeting, SM released a statement saying that Mark, Jaehyun and Johnny will not be attending due to Covid 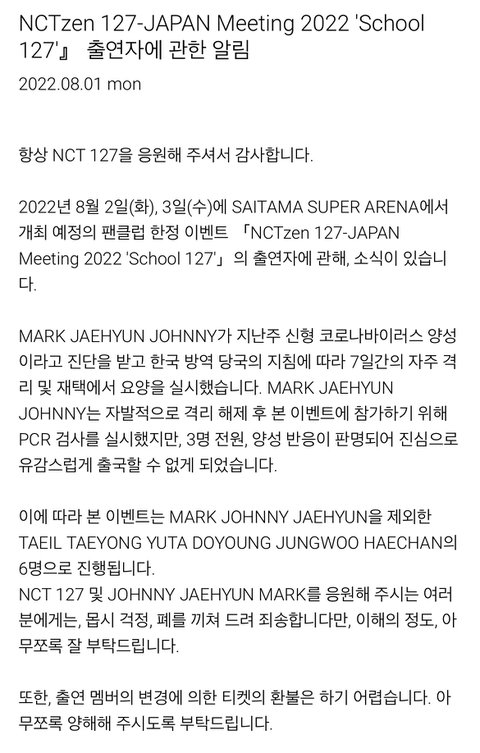 (T/N: they failed the PCR test prior to flying – backstory here)
Up until now, things were out of their control so it couldn’t be helped and people were understanding
But afterwards, Mark’s words made the Japanese NCTzens furious 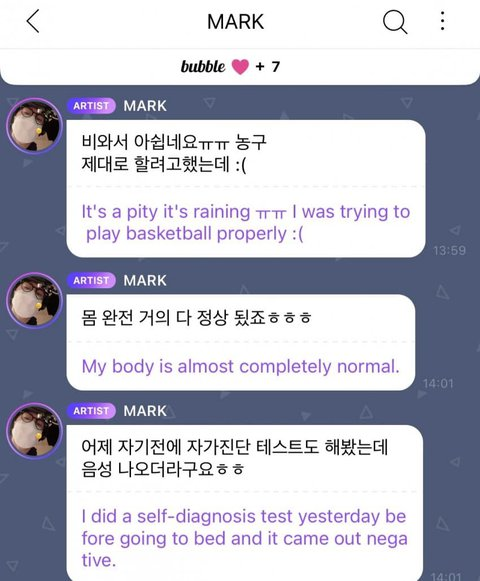 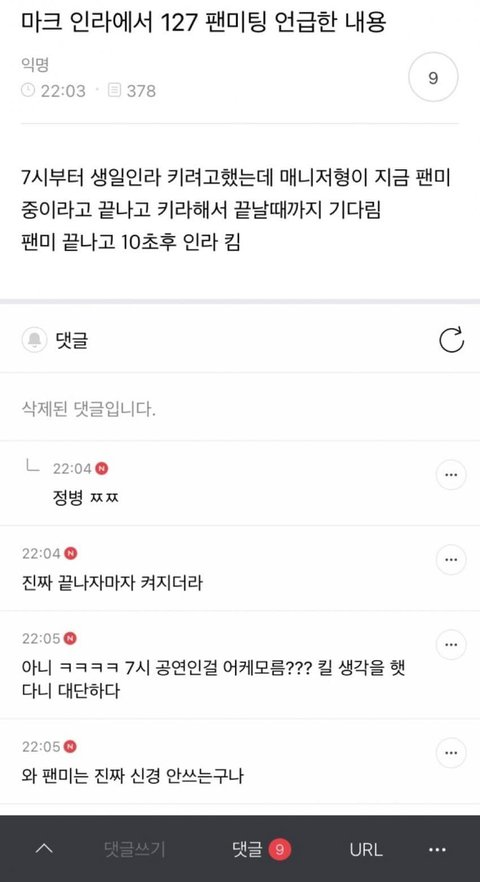 “Title: The comments that Mark made about 127’s fan meeting on his Insta live
Post: He said that he was gonna do his Insta live at 7PM because it was his birthday but his manager hyung told him that the Japanese fan meeting was in progress at the moment so he should go live after the event ends and told him to wait. So he opened his Insta live 10 seconds after the fan meeting.
Comments:
– Seriously, he went live as soon as the fan meeting ended
– No butㅋㅋㅋㅋ How does he not know that the event was at 7PM??? It’s impressive that he thought of doing his live at that time
– Wow he really doesn’t care about the fan meeting huh”
Usually, not going live at the same time as your group schedule is just having proper manners. What’s worse is that he wanted to go live on a schedule that he couldn’t participate because he caught Covid himself. 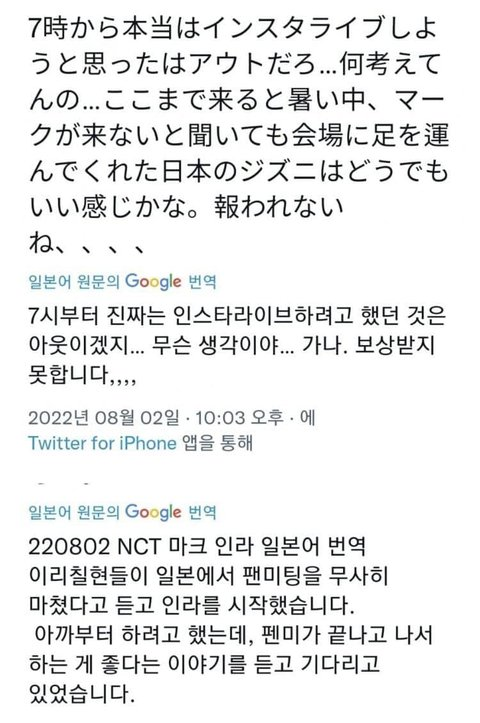 “Saying that he was gonna go live at 7PM was out… What was he thinking?… he can’t make up for this… (T/N: paragraph at the bottom is a summary of the insta live timing situation again)”
Japanese people on Twitter usually doesn’t condone others’ actions openly because of their culture but Japanese fans were furious at Mark’s actions and criticized his actions on Twitter. That tweet had over 8K likesㄷㄷㄷ 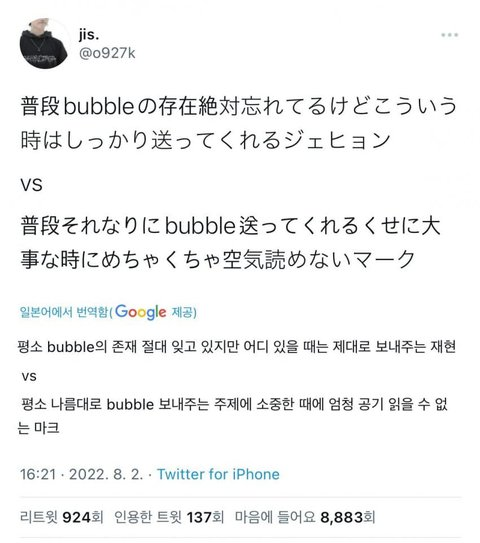 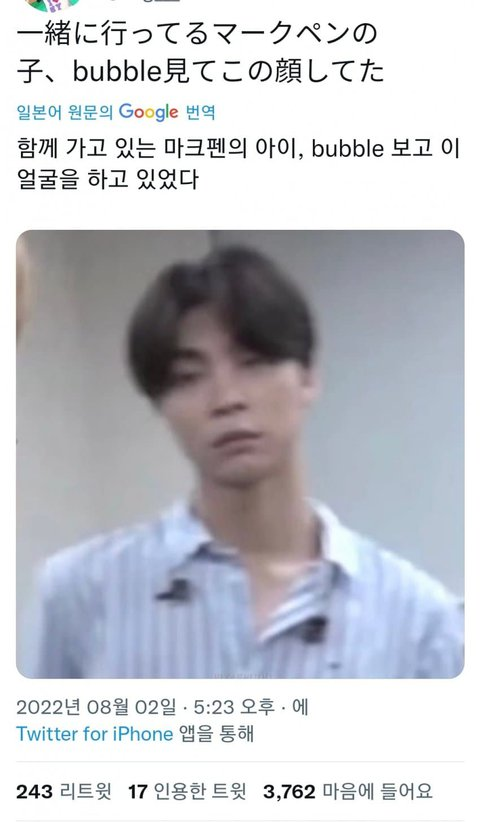 “Mark fans’ kid who is going together with them(?), the face they made when they saw his Bubble”

Mark’s earthquake comment, attitude on radio towards the DJ, etc. etc. his controversies have no end so I don’t understand how he still acts in such an immature way 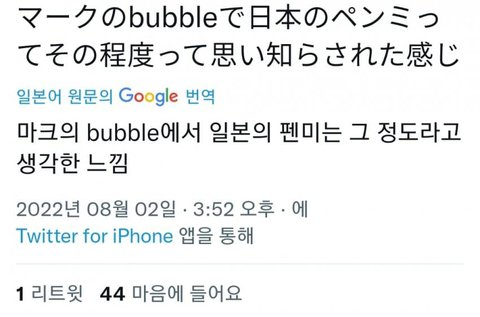 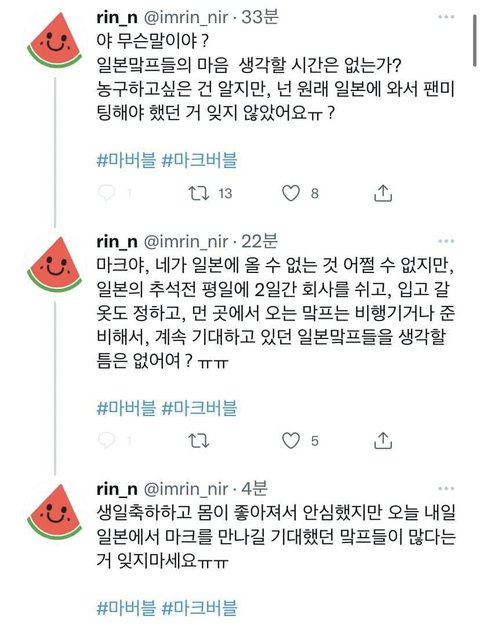 “- Yah what is he saying? Does he not have time to think about the Japanese Markfs? I get that he wants to go play basketball but did he forget that he was supposed to go to Japan for a fan meeting originallyㅠ?
– Mark-yah, it can’t be help if you can’t come to Japan, but did you not think about the Japanese Markfs who waited for you for so long and the Korean Markfs who had 2 days break from work prior to the Japanese Chuseok, who prepare changing clothes and who took the planes from a far away place just to see you?ㅠㅠ
– I wish you a happy birthday and I’m relieved that your body feels better but please don’t forget that there are a lot of Markfs who were looking forward to meet you today and tomorrow in Japanㅠㅠ”
The Korean fans still view Mark like a baby and keep on babying him so I think that it feeds into his actions even more.
His Korean fans never point out anything against him but his Japanese fans are even writing tweets in Korean out of anger.
I’m not sure if he saw his Japanese fans’ reactions, but at the end of his birthday livestream, he conveyed his regrets
post response:
[+154][-30]
original post: here
1. [+78, -6]
I think that just seeing how he said that he thought it was a pity it rained on the day of the fan meeting because he couldn’t go play basketball was enough to make people mad. I saw Korean fans shielding him on the Japanese fans’ angry tweetsㅋㅋ
2. [+72, -8]
He became so-so ever since that earthquake comment
3. [+53, -4]
This guy said in NCT Dream’s self-made content that he didn’t expect anything about Dream and that it was luck and some bullsh*t like that and didn’t he get a ton of hate for that? I kinda feel like the things that he’s thinking are different than the things that are coming out of his mouth. I can kinda understand what kind of thing he’s trying to say with a nuance but the way he says it kinda ruins my mood..?
4. [+30, -3]
After cancelling the Dream Concert, he went live and it showed how he was only interested in him catching Covid rather than feeling pity over cancelling Dream’s show and it was just upsetting… He should learn from Jisung who went to the makeup salon prior to doing a livestream. Seeing Mark after Jisung was shocking… it’s not that he lacks sense but I think that it’s true that he’s selfish
5. [+30, -1]
F*ckㅋㅋㅋㅋㅋㅋㅋㅋㅋㅋ 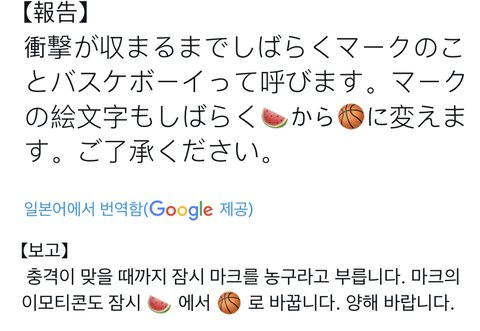 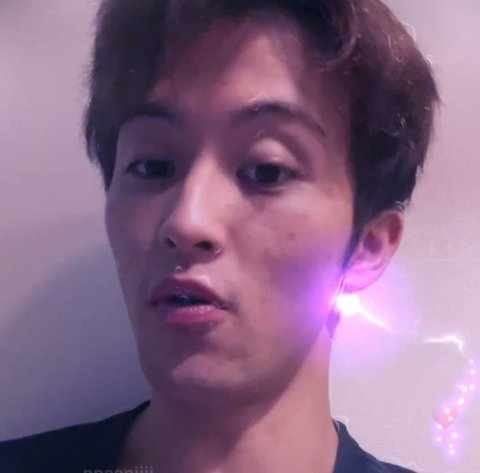 Even after receiving hate for the earthquake comment, he still can’t get in his right mind
enter-talk