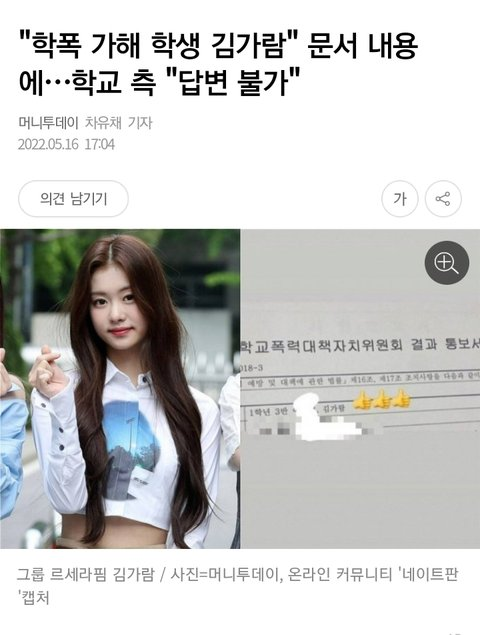 “School violence assailant Kim Garam” mentioned in document… School’s side “we can’t comment””
In the document, ‘We will notify you of the measures taken in Articles 16 and 17 of the School Violence Prevention and Countermeasures Act’, the name of the perpetrator ‘Kim Garam, 1st grader, 3rd class’ written.
The authenticity of the document is unknown, including whether the student in the document is Le Sserafim Kim Garam. When Money Today inquired about the middle school where Kim Garam attended, they answered that “We cannot comment.”
source: https://m.mt.co.kr/renew/view.html?no=2022051616141341609&type=outlink&ref=https%3A%2F%2Ft.co&s=09
post response:
[+379][-3]
original post: here
1. [+287, -4]
If this was really untrue, they could’ve simply said it’s not true. This wasn’t fabricated
2. [+237, -3]
No but of course they can’t commentㅋㅋ The school will be penalized and disadvantaged if you speak recklessly regarding personal information
3. [+174, -3]
If it wasn’t true, they could’ve just said it’s not true, whether it’s the company or the school, they’re trying to interfere with the informationㅋㅋㅋㅋㅋ
4. [+87, -0]
In the past, during Tajinyo and Tablo, because of the antis, they went all the way to Stanford University to find out that there was a misunderstanding about the claims that his graduation was a lie. Tablo even had to come out on broadcast by himself to say that he contacted the school and he received the confirmation. So if she was this confident about herself, she could’ve just contacted the school directly and show that the school have no proof of these documents and reveal it. It could’ve been resolved in such an easy way and the controversy would’ve ended right away. Instead, the company is wasting their time, meanwhile the group’s image has been completely trashed. I can’t understand. If you want to file lawsuits, they can take on average 1 year to resolve, while they could’ve solved this issue directly in a quicker way. Why are they doing this?
5. [+77, -1]
But if it really wasn’t true, the school could’ve just went to her personal record and said confidently that it was all distortion of facts, stop shielding her
6. [+58, -1]
Meanwhile, she’s going around calling herself soft tofu. It’s f*cking disgusting
7. [+50, -0]
We can’t comment = it’s true. They can’t confirm it because it would be infringing her personal information so they’re saying they can’t comment
enter-talk