Why is a kid with no schedule talking about “schedule adjustment” tsk. I already knew when she ran off to YG alone ㅋ she’s staying in the group for her image but she doesn’t wanna promote with them 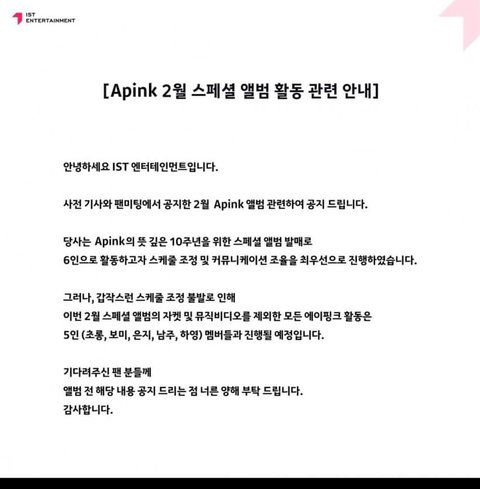 “Hello, this is IST Entertainment.
This is our statement regarding Apink’s February album, which was announced in previous articles and at their fan meeting.
The agency did our absolute best to adjust schedules and keep communication open so that Apink’s special album, which is for their meaningful 10th debut anniversary, would have all six members for the promotions.
However, due to sudden scheduling conflicts, all of Apink’s promotions except for the album jacket photos and the music video shoot will be carried out with five members (Chorong, Bomi, Jung Eun Ji, Namjoo, and Hayoung).
We ask that fans, who have waited a long time for Apink’s comeback, take an understanding view of this statement.
Thank you.”
CR: Soompi
post response:
[+779][-102]
original post: here
1. [+566, -10]
No but is Jung Eunji not busy then?ㅋㅋㅋㅋㅋㅋㅋㅋㅋㅋ you can’t shield this
2. [+315, -11]
Yah she f*cking crushed everything. And it’s a special album on top of itㅋㅋㅋㅋㅋㅋㅋㅋ she’s been shutting her mouth for 2 years now
3. [+253, -8]
But seriously, it’s not like Son Naeun had anything to do. She sure is busy (sarcasm)
4. [+194, -2]
Son Naeun is too busy? Jung Eunji is also super busy and what’s worse is that Jung Eunji has a morning drama, is a fixed cast at a variety show and is preparing for another drama. She seems busier than Son Naeun though?
5. [+149, -17]
She can’t act so why does she keep on acting? Her nose is slowly getting higher and her lower face is as weird as ever. She never moves her cheeks and she just spits out her lines. I don’t understand why she’s always the lead
[enter-talk] WE SHIELDED SON NAEUN WAY TOO MUCH UP UNTIL NOW
Even when she doesn’t interact with fans and gets hate, she gets shielded
(She could’ve at least leave write some posts in her official fan cafe where she can interact with her fans alone. But she only went there once in 2-3 years. And the last post she uploaded there was to let people know that she’s going to YG)
Even if she dances lazily, people are shielding her, even if she doesn’t talk much, people are shielding her
The other members are all dyeing their hair and she’s the only one not dyeing hers because of her drama
They shield her saying it’s for her drama
When other people say that she has no affection towards Apink and hate on her, her fans are shielding her saying that they know how Son Naeun is and to stop feeding the trolls
But this time, you can’t shield her anymore (T/N: OP is talking about Son Naeun sitting out for Apink’s special comeback album)
Of course, I don’t think YG didn’t intervene
(To be honest, I wanted to blame it on the companyㅋ but looking at the official statement, they said that it was her own choice ㅋㅋㅋ)
They discussed their comebacks a few months ago and were trying to reach a final agreement by February and there were even articles about it. But suddenly, they announced that the plans fell through so I was wondering if YG was behind it but it could’ve been Son Naeun’s choice too.
We are just disappointed.
Seeing that she has things more important than Apink…
They would only be promoting for 2 weeks and to be honest, if she had to miss out some schedules within the 2 weeks because of her busy schedule, everyone would’ve understand
But seeing her decline the whole thing is so irresponsible and rude towards the member and their company.
I’m seriously sad 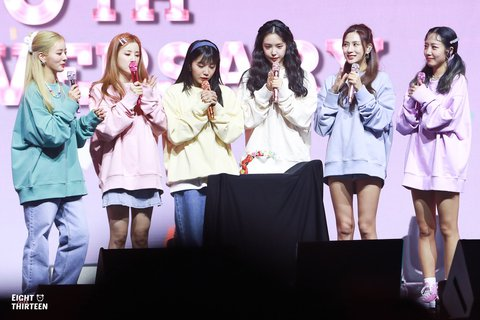 post response:
[+1,335][-102]
original post: here
1. [+1,125, -41]
She can’t even act so why is she so stubborn about acting..? Instead, Jung Eunji who does both variety and singing at the same time is a way better actress. I would’ve understood if Jung Eunji was the one pulling out
2. [+589, -19]
That’s how I feel too. She can say that she has affection towards Apink with her mouth but she has to show it through her actions. She’s the one who moved agencies so she should know best that she has to show it with her actions
3. [+522, -18]
That company is a bit pitiful.. Looks like they invested a lot in this album but they suddenly got stabbed by that other side ㅋㅋㅋㅋㅋㅋ
4. [+313, -7]
I’ve been a fan of YG for 10 years and people are saying that YG is interfering? ㅋㅋㅋㅋ They are a company that makes the fans go crazy but are heaven to their artists. They will never force their artists to do this or that. Rather, they just do nothingㅋㅋ
5. [+293, -13]
Also, the company must’ve spent a lot for this comeback. They hired a foreign choreographer and even shot the MV for two days. Of course the fans would be mad when Son Naeun just pulled out like that
6. [+256, -7]
Not sure if it was Jung Eunji instead but Son Naeun doing this is just a bit funny…ㅋㅋㅋㅋㅋ Do you think that Jung Eunji isn’t busy?? I’m not in the position to judge her but as a fan who likes Apink, she’s always been the same before and now.
enter-talk