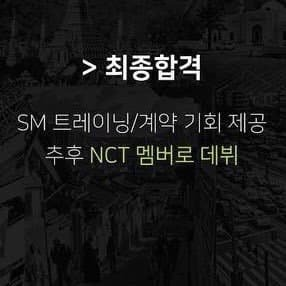 SM training/Offer contract
Later debut as a NCT member
“Later debut as a NCT member”
post response:
[+144][-7]
original post: here
1. [+76,-4]
If my skills were above average, I’m going to Hybeㅋㅋㅋ
2. [+72, -1]
Me too as a multi-fan, I’m not curious about NCT’s new members at all. I just want them to give us a new group. This is getting boring
3. [+46, -1]
F*ck I’m pissed because of NCT, we won’t be able to see a new boy group. They’ve never given us a hit boy group for each generation. SM-ah just when are you going to give us a boy group?
4. [+30, -0]
It just feels like they’re pouring broth in the same pot all the time so I have no more expectation.. Just give us a new group
5. [+11, -0]
Right now, there are many NCTizens who are leaving the fandom, meanwhile they’re still trying to make NCT happen. This is the time to stop already. I don’t understand why SM is so fixated on NCT? Do they not have enough talents to debut a new boy group so they’re using NCT’s name because they can borrow their fame and promote? Each unit is supposed to have their own color, but even the new members that they reveal can’t help but match their image to what’s already there. The fans of NCT already have their own place so adding anyone, even if they’re talented, might reduce their chance to stand out. SM seriously needs to wake up
6. [+8, -0]
Seriously the trainees above average who end up in SM will debut in NCT who are already 7 years into their debut and have a position like Sungchan and Shotaro. Rather than this, they should go to Hybe where your probability of debuting is way higher… Just look at Kazuha, she only trained for half a year and already debuted
7. [+8, -0]
Do they really not have any conversations about debuting a boy group aside from NCT????=

[theqoo] BTS’ LAWSUIT STATEMENT (RELATED TO INFRINGEMENT OF THEIR ARTIST’S PRIVACY) IS OUT!!

[theqoo] VIETNAMESE CHANGE AFTER GETTING INTO KPOP..JPG