(T/N: there are reporters who came forward to harshly criticize HYBE in a podcast for the way they handled the situation and shifting the blame to BTS – you can read the thread here for more background story. The tweet below also gives some context)
Reporters’ assessment of HYBE executives’ incompetence that did not respect the artist’s choices and create unnecessary controversy with repeated blunders.
‘Lee Jin-hyung’, the communication manager, talked in detail about the military service issue. All the reporters who heard this were stunned. “The members are also anxious. It is uncertain.” “I hope this bill will be dealt with as soon as possible.” Everyone was taken aback by the remarks that seemed to put pressure on the National Assembly.
What the entertainment company should do (hypothetically) is that even if Bangtan are acting horrible, the company has to pretend to adhere to high moral standards.
But HYBE is doing the opposite.
The members performed so hard that they hyperventilated, but online community sites had nothing but swear words towards BTS. (because of Lee Jinhyung)
One member’s answer that he would leave the military service issue to the company but he only answered in theory. It was too risky to express one’s own opinion so he had no choice but to say “I think the company’s position is probably ours.” The members simply trusted the company.
Then who kept their loyalty more in this case?
The members are cleaning the poop that the company made. This always happens. Usually, the company is the one cleaning after a celebrity’s mess. But why is it the opposite here?
Full version of the podcast: https://www.podbbang.com/channels/1773990/episodes/24329589
post response:
[+1,065][-52]
original post: here
1. [+405, -13]
The most unfairly treated ones are Bangtan right nowㅇㅇ they were preparing for their rehearsal without even knowing what the CCO said and were just called hurriedly (to the conference). Their must be parts (of the enlistment talks) that were already discussed with the company and they just trusted the company but this is how things turned out. So please, don’t hate on BTS 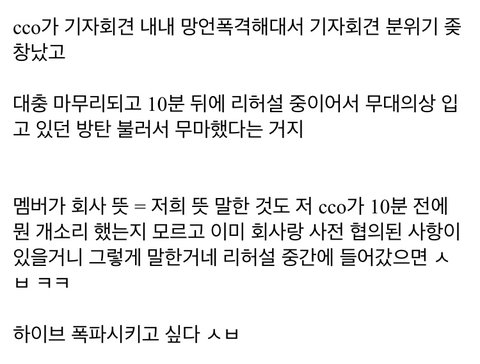 “The CCO kept saying nonsense at the press conference and the atmosphere became a mess
The whole thing was more or less over, and they called Bangtan who were wearing their stage outfits since they were rehearsing in 10 minutes to appease the situation
The member said that the company’s thoughts = the members’ thoughts but they weren’t even aware of the bullsh*t that the CCO said 10 minutes ago and because they must’ve already discussed the matters beforehand with the company, they said it like that. If they went in their middle of their rehearsal, f*ckㅋㅋ”
2. [+326, -6] 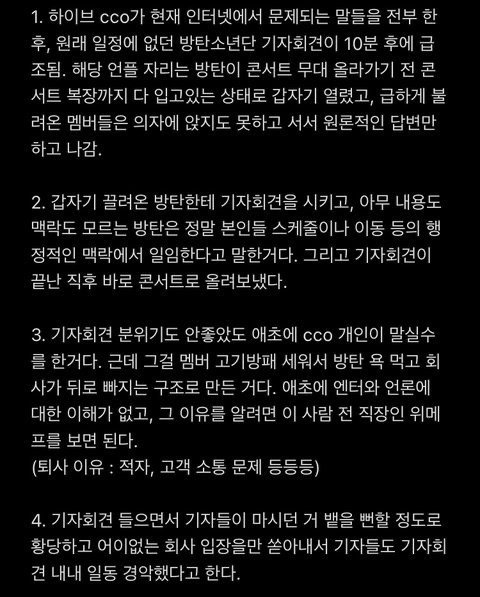 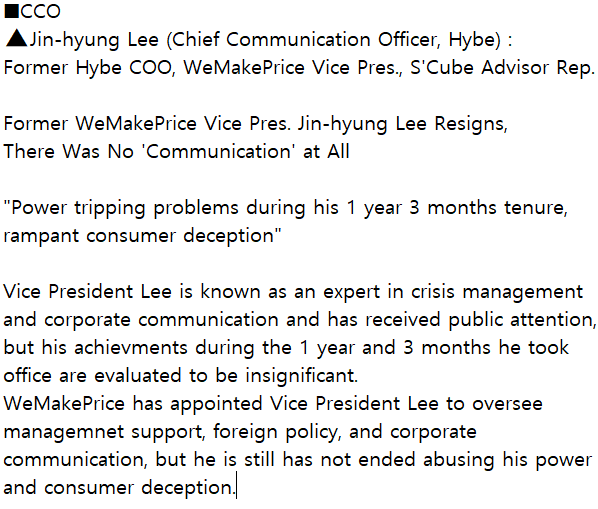 If you’re wondering how much of a slip of tongue Bangtan’s enlistment talk was.. the question was asked to the CCO, nobody asked Bangtan about enlistment. And he was the only one answering. Every time the journalist asked a question, the CCO would get mad. Do you know how f*cked up it is to be called on an impromptu by an executive in a formal place like that?
5. [+139, -5]
The comments telling them to stop pushing it back and just enlist are ridiculous. They act as if Bangtan was pushing it back because they can. The country promised them a revision and said they would take care of it. Bangtan is doing like any other male idols who are promoting before getting called and they are just trying to be in agreement with the revised billㅋㅋㅋ Other male idols are also getting as old as they can before enlisting but only Bangtan are receiving hate
[enter-talk] BANGTAN WERE PREPARING FOR THEIR STAGE. LOOK AT HOW MUCH THEIR PUPILS WERE SHAKING WHEN THEY GOT DRAGGED IN

Seeing the picture makes me even more annoyed, f*ck…
2. [+127, -1]
Wow.. seeing it now, all of their expressions areㅋㅋㅋㅋㅋ meanwhile, there weren’t even anywhere to sit and they are just standing there blankly, f*ck
3. [+105, -1]
Ha.. how is this real?
4. [+52, 0]
But seriously, this is indeed different than usual. I’ve never seen them wearing their stage outfits to a press conference before their tour. Usually, they are always seated and wearing suit. HYBE, you f*ckers
5. [+50, -1]
From what I see, the issue here is that the Bangtan kids are kind;; If only they were f*cking rebellious and devil-driven… even though they wouldn’t be as popular if they were like thatㅠㅠ
enter-talk