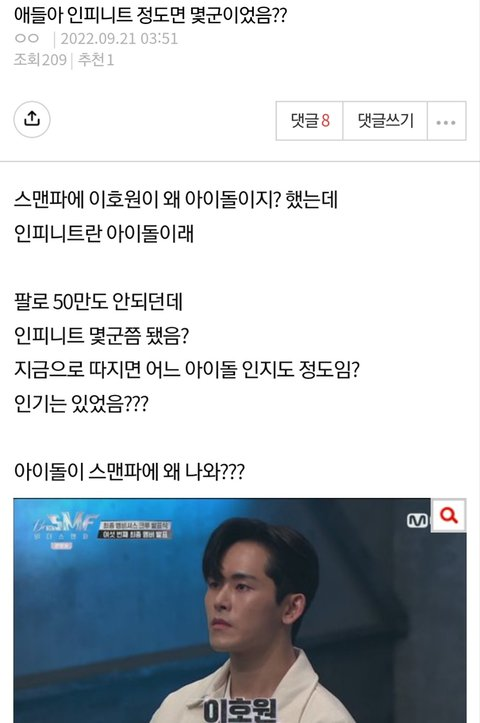 “Kids, what rank was Infinite??”

“I was wondering why was Lee Howon considered an idol on SMF? And apparently he was an idol from Infinite.
They weren’t even able to sell 500K copies, so what rank was Infinite?
Compared to idols of today, who would they compare to?
Were they popular???
Why is he on SMF???” 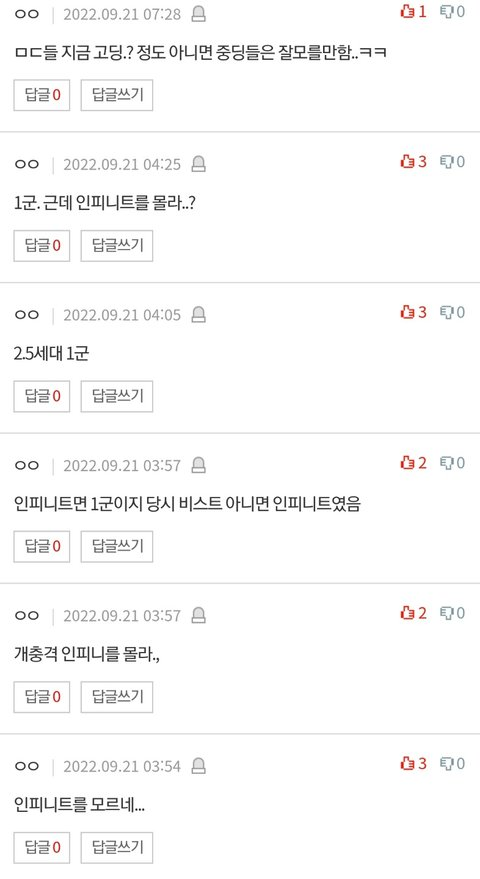 1. If you’re not in high school..? And you’re in middle school, you wouldn’t know them..ㅋㅋ
2. They were A-list. But how do you not know Inifnite…?
3. They were from the 2.5 generation and they were A list
4. Infinite was A-list alright. At that time, it was either B2ST or Inifnite
5. I’m freaking shocked that you don’t know Infinite..
6. How do you not know Inifnite
Look at them pretending that Infinite was A-list because someone said they didn’t know theㅋㅋㅋㅋㅋㅋㅋㅋㅋㅋㅋㅋㅋㅋ They were from a small agency and they were flops, how are they A-list?
post response:
[+18][-77]
original post: here
1. [+70, -4]
How is Infinite considered flop?
2. [+68, -4]
It’s true that they were A-list during the 2.5 generation though?? The Chaser, Man In Love, … At that time, those were f*cking hits..It was around 2010
3. [+59, -2]
It was to the point we had to make a 2.5 generation as a separate thing.. Even if you don’t think they’re A-list, they were still freaking popularㅋㅋ Who cares if they were from a small company.. They started from a house in Mangwon and thanks to their comeback, they were able to go to a good dorm. If you think of it like that, you can see how freaking amazing they were..
4. [+38, -2]
I feel like they were definitely higher than B-tier though? They had mega hits and they had consecutive hits too, their popularity was impressive
5. [+34, -2]
If we talk about small agencies’ miracles, there were B2ST, Infinite and Teen Top. At that time, all teenagers knew them and they swept the music shows
enter-talk