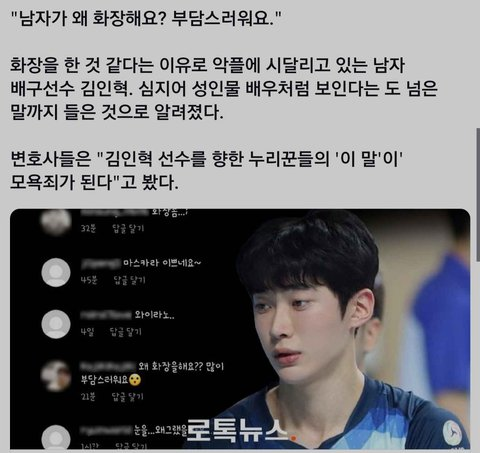 “”Why is a man wearing makeup? It’s making me uncomfortable.”
Male volleyball player Kim In Hyuk who suffered from hate comments for wearing makeup. It is known that he even heard people saying that he looks like an adult actor.
Lawyers said “‘this word’ that netizens used against Kim In Hyuk became a criminal contempt”.

Is it that hard to just keep the things that you don’t like to yourself and just leave others alone and not saying anything?? Even if there’s something you don’t like that’s bothering you, you can just say to yourself “it can happen” and just let it slide. By doing this we can create a much free-er and respectful world. But these people have such overinflated egos that if there’s something that makes them upset, they need to make it obvious.. Why is it so hard to look away without saying a word?.. You can tell just by looking at Pann. Unless they are criminals, let’s just overlook it. This is seriously an issue in our country. Why are you thoughtlessly mocking others with your own words without taking responsibilities over others’ lives? And you also believe that if a lot of people agree with you, you guys can become a dagger that pierces through that other person. Seriously, unless they are a criminal or have rotten ideologies, just shout to yourself “it can happen” 3 times in your head.. Seriously, please, I’m begging you.. I’ve seriously never written any hate comment about anyone in my whole life and when others share their thoughts around me, I’m always careful not to suppress others’ freedom and tastes. I wish that there would be more people who think like me. It’s not like people have to agree on everything and if there’s anything that makes you uncomfortable, don’t make it obvious and just make a conscious effort to suppress it… Ah seriously, I’m so annoyed. Why do people not know how to do this?
2. [+580, -10]
Athlete Kim In Hyuk wrote the dates on his Insta description… he wrote that himself… just how much was he suffering to even write it down.. The people who wrote hate comments about him shall be punished 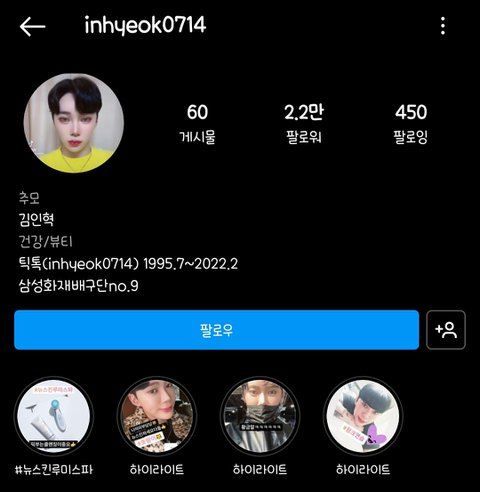 “He got caught lying about plastic surgery so he’s escaping to hell”
6. [+197, -11]
Seriously, do you guys feel refreshed now that you k*lled someone? F*cking hate commentors 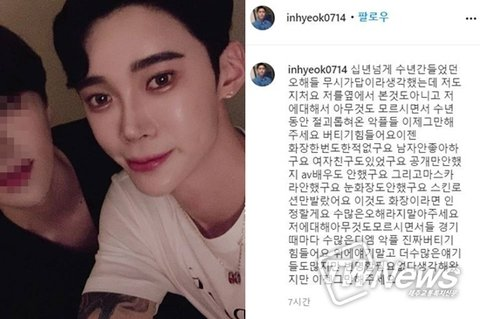 “All of these misunderstandings that I have ignored for the past 10 years. I thought that ignoring them would be the best, but now I am tired. None of you have ever seen me up close, and you know nothing about me, and yet you constantly bully me with your malicious comments. Please stop, I’m so tired of them. No, I do not wear makeup, I have never worn makeup, I do not like men, I have a girlfriend, and no, I have never acted in any AV content in my life. Again, no I did not put on mascara or any eye makeup. I put on toner and lotion, but if that’s makeup, then sure, I put on makeup” – CR: Allkpop