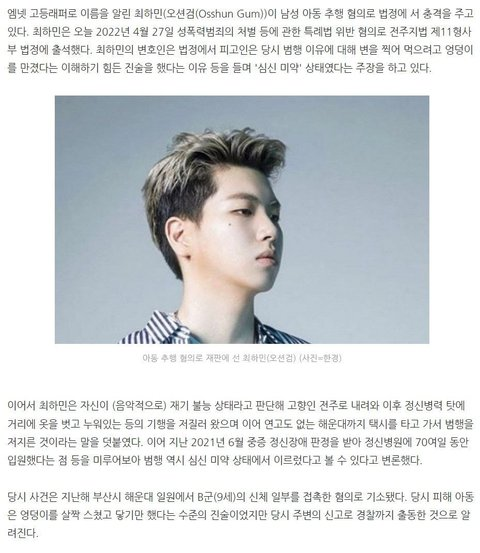 Osshun Gum then explained that he is unable to recover his music career and thus, decided to return to his hometown in Jeonju. However, due to his mental instability, he showed eccentric behaviors such as lying down on the streets with his clothes off and more. He also stated that he had randomly taken a taxi to the Haeundae district, a place he has no connection to, and committed the crime.

CR.Allkpop
Hul..
post response:
[+575][-7]
original post: here
1. [+340, -3]
This guy was never able to become a huge issue with the general public, he did a bunch of weird stuff in the past so much so that most rappers have cut ties with him. His company also kicked him out. He lost all his money so he became a debtor. There was also a huge rumors about him becoming addicted to gambling. But after some clarifications, turns out it wasn’t gambling he was addicted to, rather he was actually just really mentally ill, it was so bad that he even ended up in a mental institution and stayed there for a long time. Recently, he was diagnosed with schizophrenia
2. [+274, -2]
“Pick and eat the poo”… what does he mean… Ah my eyes
3. [+266, -3]
When he first appeared on Highschool Rapper, he was such a good student and he was even a model student and I even remember him mentioning that his parents hated the fact he was rapping? ㅠㅠ He could’ve lived such a good life if he just pursued hip hop after..
4. [+163, -0]
A model student turned lowest of the society, hip hop edition… You really can’t tell where life will bring you
5. [+138, -0]
He’s even almost 190cm tall and he had quite a huge following too, he mentioned that he was a really scared kin in his choding days and that childhood for him just “flew by”… I feel like he just didn’t know anything he was doing and was just doing anything for the sake of doing something
enter-talk