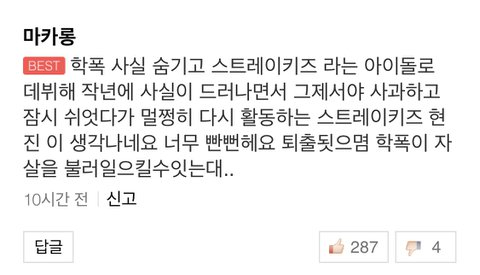 “This reminds me of that Hyunjin from  theStray Kids group debuting by burying down their school violence bully, last year when the truth was revealed, they only decided to apologize at that point in time and made him rest for a little bit and just put him back on promotion again. He’s just too shameless. I hope you kick him out. School violence can lead to suic*cde….” 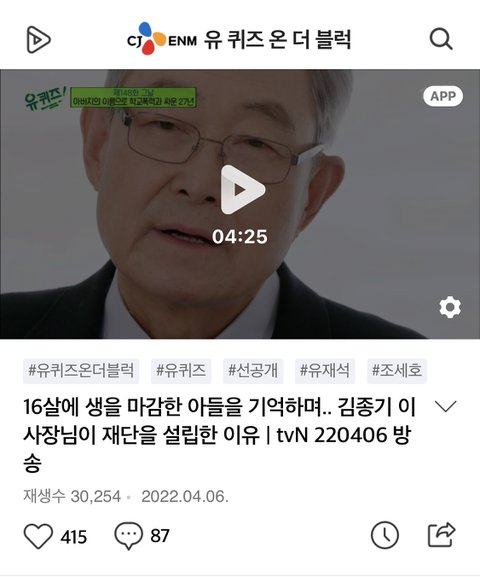 “Remembering my son’s life which stopped at 16 years old… The reason CEO Kim Jonggi built a foundation“
post response:
[+777][-45]
original post: here
1. [+249, -9]
This is why you can’t let school violence perpetrator out on broadcast. Bringing them on broadcast is the same as secondary assault and the trolls following him will go and torment the victims another time too. Their face is so think
2. [+157, -8]
The fans are shielding him with their blood. When I searched for Hyunjin, this came outㅋㅋㅋㅋㅋ

“The people who shield Hwang Hyunjin pretending to be his friend”
This is the reason you guys are seriously going to be punished 1000x times…
You guys are trying to hide the sky with your hands
Who didn’t know about Hwang Hyunjin’s personality at Seongnae Middle School?
The whole school’s teachers and students all knew him…”
3. [+138 -11]
It’s just like how Le Sserafim’s classmate released their year book graduation picture and ‘clarified’ for herㅋㅋㅋㅋㅋㅋ meanwhile Hyunjin’s fans are using the same excuse to defend him because someone released a picture of a year bookㅋㅋㅋㅋ
4. [+77, -1]
ㅋㅋI really hope that actors or singers or people like Yang Hongwon who committed school violence never appear again ㅋㅋㅋㅋ It’s f*cking disgusting that they’re even describing him as having the ‘talents of the devil‘..
5. [+63, -1]
Hwang Hyunjin isn’t the only one, there’s his labelmate Lia tooㅋㅋㅋㅋㅋ
6. [+60, -1]
Just look at Kim Garam. She’s seeing that people can still promote just fine even after being exposed. They’re seriously sending a bullsh*t precedent
enter-talk