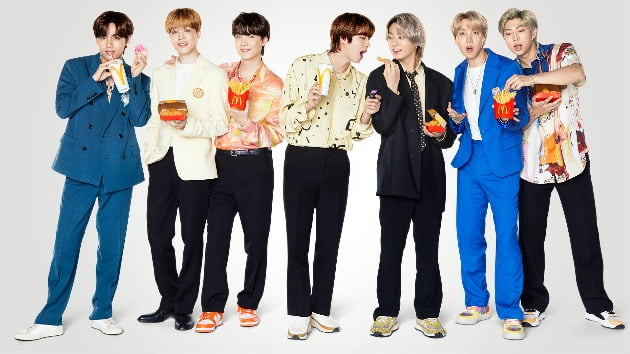 McDonald’s Korea achieved record sales last year despite the prolonged COVID-19 outbreak. Analysis shows that the ‘The BTS Meal’, which was introduced in partnership with the world star BTS last year, was effective.
McDonald’s Korea announced on the 26th that last year, excluding franchisees, sales increased 9.7% from the previous year to 867.9 billion won.
—
Last year, excluding affiliate stores, sales increased by 9.7% to KRW 867.9 billion
Achieved 1 trillion won in sales including affiliates
Operating loss 27.8 billion… deficit reduction
source: here
original post: here
1. As someone who doesn’t eat their hamburgers and only orders their sides, BTS mean was too goodㅋㅋㅋㅋㅋ
2. No wonder… It was totally a craze
3. But seriously ㅋㅋㅋㅋㅋㅋㅋㅋㅋ I only eat Mcdo once a year and I actually debate whether to eat or not every time, but thanks to them I went there at least a few times a weekㅋㅋ
4. Of course, it was totally crazy for Mcdo ㅋㅋㅋㅋ
5. I’m not even a fan and even I ordered the setㅋㅋㅋㅋㅋ
6. Please do it again… It was so deliciousㅠㅠ
7. Now that you guys know, do it again
8. Wow 9.7%
9. No wonder, I ate this consistently until the event ended
10. I used to work part-time at Mcdo and it was truly hell… I’ve quitted sinceㅋㅋㅋㅋㅋㅋㅋㅋㅋ
instiz

[instiz] INSTIZ READERS, WILL YOU STILL BE FANGIRLING ONCE YOU HIT 30?

[instiz] THE #1 TRIBUTE IN IAC