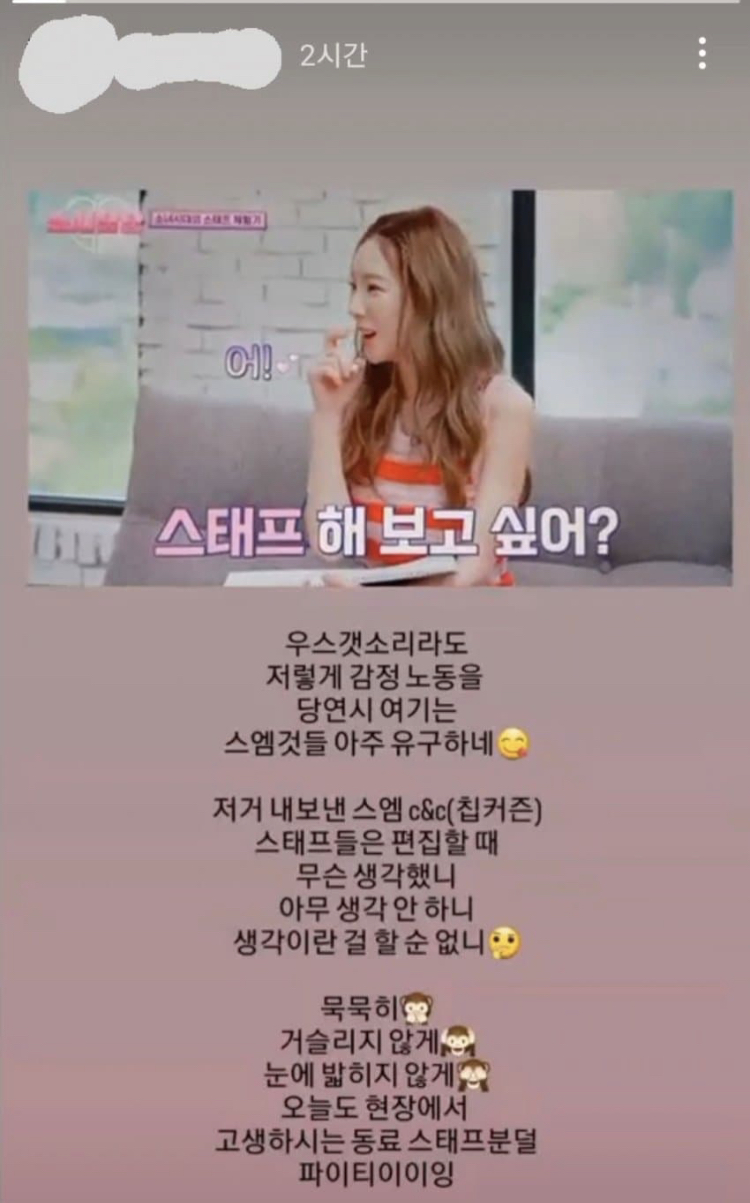 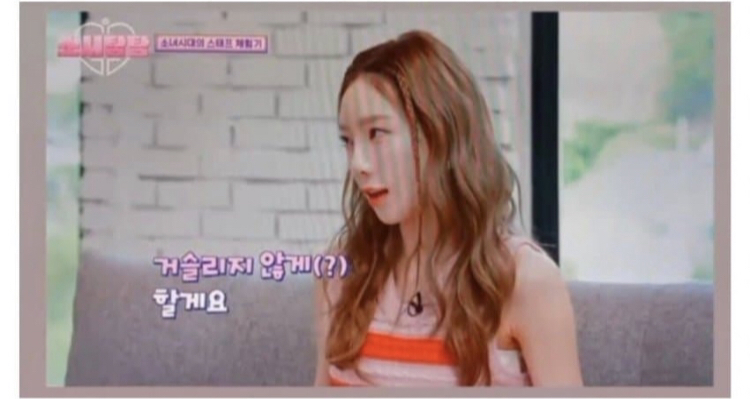 Screencap captions:
– Have you ever tried being a staff?
– Yes!
– I won’t get on your nerves
Story:
Even as a joke, SM has been taken for granted the emotional labor for such a long time 😛
I wonder what the staffs of SM C&C thought when they received this? I’m sure they didn’t think of ‘nothing’
“Silent” “not get on people’s nerves” “not stay in the back of someone’s mind”
To the staff that suffered today onsite, fightiiiiing
—
Taeyeon said that staffs should stay silent, not get on her nerves and not stay in the back on someone’s mind
The story is being ambiguous on whether they’re criticizing Taeyeon’s mindset or exposing her power trip
They even took a screen shot of Taeyeon and said that it’s been a long time that SM has been doing this, that the staffs are suffering, and they must find strength
+
The staff was probably mad when they wrote it, I’m dumbfounded seeing comments saying that she’s always joking and that this is ganging up against her. And why would that staff purposefully mention that SM has been like that for a long time and that the staffs must find strength? Why do you think that Taeyeon didn’t mean tit? Don’t see this as someone between Taeyeon – the audience, rather , the staff – Taeyeon.
The other group’s fans are funny too, you think that they’re just trying to stir a controversy? The staff mentioned it directly, you guys don’t usually react like that in ‘exposing’ posts though?
original post: here
1. The post is kinda ambiguous but the title is making us think that they’re definitely taking a jab..
> But to my eyes, it can’t be anything else than taking a jab..
2. With just that first sentence alone, it sounds like trying to expose her
3. But why would she talk like that about her staff…. The staffs are suffering just as much as her, and the fact that the staff is mentioning ‘SM’ means that they’re probably pointing fingers at other people from SM too
4. Oh… the fact that the staff mentioned the artist herself, I think this must be true… But is that really an SM staff?
> It’s an SM staff, they seem to know SM well
5. The fact that they wrote “SM”< it’s pretty clear that she’s taking a jab at the artist… But I don’t think they’re only talking about Taeyeon
6. Whether it’s really a staff or not, her comment was seriously so so
7. But the comment itself is… Think a bit about the work of the staff, there’s so many angles this can stir a controversy
8. I don’t think she’s exposing her, but more like criticizing her mindset?
9. The comment is … Saying stuff like a staff shouldn’t get on your nerves isn’t something you just unconsciously happen to think about
10. I watched it, Taeyeon was acting as the staff and said that she would stay silent and not annoy anyone, but I didn’t think that she meant that staffs had to be like her..
instiz