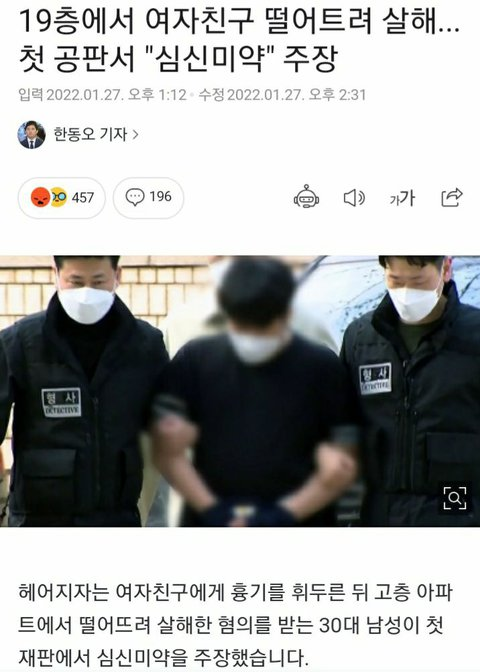 “Dropping girlfriend from the 19th floor k*lling her… claims ‘temporary insanity’ during first trial”
A 30-year-old man accused of k*lling his girlfriend by dropping her from a high-rise apartment after wielding a weapon at the girlfriend who was about to break up with him, claimed mental and physical weakness/temporary insanity at the first trial.
The Seoul Central District Court held the first trial date of 32-year-old Kim, who was charged with m*rder today.
Kim’s lawyer admitted that he confessed to the crime, but said that he would apply for a mental evaluation, saying that Kim was continuously treated for a mental illness.
The court will decide whether or not to adopt a mental evaluation at a hearing in March.
Previously, Kim was handed over to trial on charges of causing her to fall from the 19th floor of an apartment building, k*lling her after swinging a knife in anger at the words of the victim’s breakup at an apartment in Seocho-gu, Seoul last November.
—–
All the woman did was say she wanted to break up. But he’s the one who decided to pull a knife at her, pushed her down the building and k*lling her. And now he’s pleading for mental and physical weakness.
A “””part”””” of the Hannams would stalk you and k*ll you if you ever diss them. If you date them and they grow suspicious over whether you’re cheating, they’ll either k*ll you or ass*ult you on a date. If you tell them you want to break up with them, they can also k*ll you in a fit of anger. If you end up marrying them and end up being victim of domestic violence, they can k*ll you … I lost my words
Even after such severe crimes, we’re not supposed to mock the perpetrator, they refuse to show his faceㅋㅋㅋㅋ
post response:
[+2,334][-17]
original post: here
1. [+688, -22]
No but what’s happening lately? Is it the trend to k*ll people for leaving a notice of departure against Hannams now? The world has gotten more rotten and crazy
2. [+582, -12]
Release his face, ah why are nobody giving attention to posts like these nowadays??? F*ck
3. [+382, -16]
F*ck reveal his face, this is crazy. Why are there so many date ass*ults nowadays?
4. [+209, -2]
They revealed the face of the female student who wrote the mocking letter, yet it’s so obvious to everyone that they can’t reveal the face of a man who m*rders a woman

“There’s only one enemy and we’re many, but if we can’t make her commit s*icide, I’ll be ashamed.” *t/n: post on male community against the female student*
5. [+145, -1]
ㅋㅋㅋㅋ We seriously get this kind of news every week. If these kinds of news broke out in other countries, it would’ve become a huge topic, but in Korea, since it’s so common, everyone’s staying quiet right? The m*rders always remain quiet, but Korea is the only country who would make a huge fuss over trivial stuff 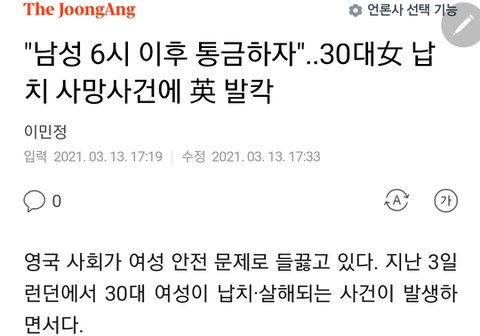