What a cool brat
They both are the same age but lead total opposite lives…ㅋㅋ
What is that f*cker who got caught gonna do when he grows older to already been doing this now? Sigh 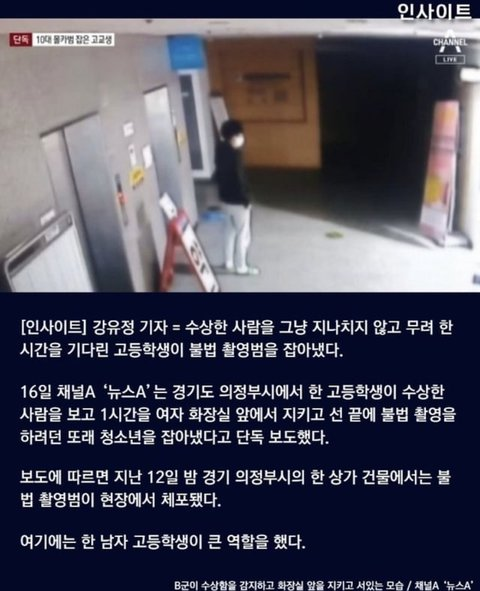 On the 16th, Channel A’s ‘News A’ reported exclusively that a high school student in Uijeongbu, Gyeonggi-do, saw a suspicious person and stood in front of the women’s bathroom for an hour, and finally caught the teenager who was trying to film (the girls) illegally.
According to reports, on the night of the 12th at a commercial building in Uijeongbu, Gyeonggi Province, an illegal videographer was arrested on the spot.
The male high school student played a major role in this. 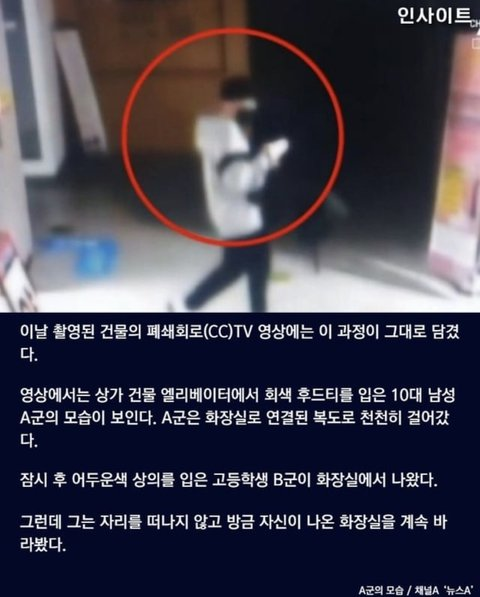 This process was captured in the closed circuit (CC) TV video of the building that was filmed that day.
In the video, student A, a teenage male wearing a gray hoodie, is seen in the elevator of a commercial building. A walked slowly down the hallway leading to the bathroom.
After a while, high school student B, wearing a dark top, came out of the bathroom.
B did not leave his spot and continued to stare at the bathroom from which he had just left. 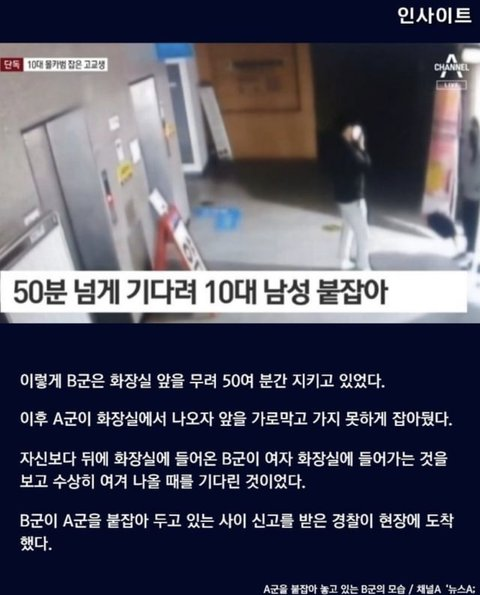 In this way, B was guarding the washrooms for about 50 minutes.
After that, when A came out of the bathroom, B blocked the front and held unto him so that he could not go.
B saw that A, who entered the bathroom after him, went into the women’s bathroom, and was suspicious and waited for him to come out.
Police arrived at the scene after receiving a report while B was holding A 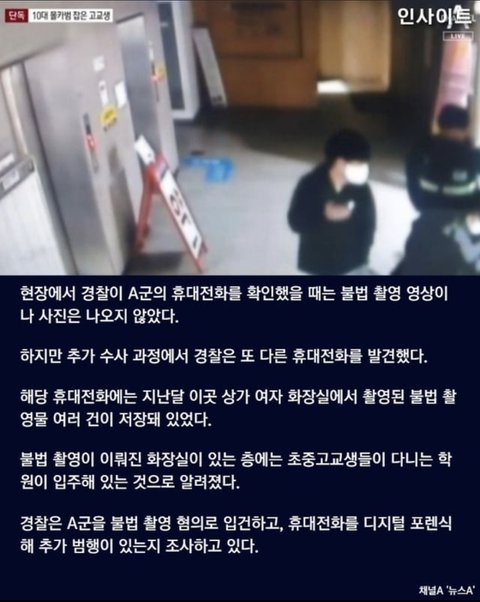 When the police checked A’s cell phone at the scene, there were no illegal filming videos or photos.
However, during the further investigation, police found another mobile phone.
The mobile phone in question stored several illegal photos taken at the women’s washrooms in the shopping mall last month.
It is known that an academy attended by elementary, middle and high school students is located on the floor where there is a bathroom where illegal filming took place.
The police booked A on charges of illegal filming and are investigating whether there are additional crimes by digital forensics of his mobile phone
post response:
[+1,814][-6]
original post: here
1. [+898, -1]
Wow his personality is daebak. For real, you’re telling me that he waited 50 min just to catch him?
2. [+524, 02]
Wow too cool, seriously
3. [+448, 02]
But there are actually a lot of people who would go in a washroom stall in secret and then film the next stall from the bottom or the top… Be careful. The same thing happened in our school and there were 5 police men who came and it made a huge buzz
4. [+305, 0]
Give him a certificate, he’s f*cking cool. It’s not easy to wait and endure for 50 min
5. [+269, -2]
Men are always acting like sensitive-bugs while going “where are the molkas nowadays?” but this kind of thing is still so common? Instead of wasting your time talking, I hope that you go out and contribute to the society like that student ^^
6. [+199, -1]
Seriously, that’s why I find people who treat girls who are afraid of molkas as if they have some kind of mental disease so disgusting
teens stories