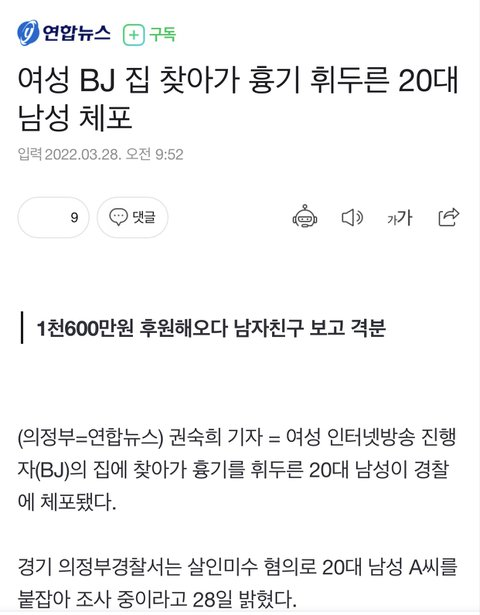 A man in his 20s was arrested by the police after visiting the house of a female internet broadcaster (BJ) and wielding a weapon.
The Gyeonggi-do Uijeongbu Police Station announced on the 28th that they are investigating a man in his 20s on suspicion of attempted murder.
A is accused of attacking BJ B, a woman in her 20s living in Uijeongbu City around 6 pm on the 27th, and wielding a weapon.
A is said to have been a viewer of B’s Internet broadcasting, and it is said that they became friends after he sponsored 16 million won (~13K USD).
It was investigated that he went to B’s house on the same day and saw B’s boyfriend visiting, and was furious and wielded a weapon at B.
After the crime, A also attempted suicide.
Both were reported to be in a non-life-threatening condition.
A was arrested at the scene by the police.
Police are investigating the exact motive and circumstances of the crime.
post response:
[+309][-3]
original post: here
1. [+94, -20]
Can they stop killing women already
2. [+91, -0]
Seriously are they not embarrassed?ㅋㅋ
3. [+77, -1]
Just what is wrong with their intellectual ability?
4. [+28, -0]
Do they think they can buy women with money?
5. [+25, -0]
It reminds me of the Webtoon Suhee0… This gives me goosebumps (t/n: plot: Suhee accidentally appeared on her brother’s live broadcast and apparently the audience loved her! They asked Suhee to live stream more often. In return, the audience gave Suhee money every time she performed. Suhee is seriously thinking about becoming a live streamer because she needs money to help her sick father and raise her two younger siblings. But, is it really an easy way to earn money? Or… will she find trouble?)
6. [+19, -0]
BJs obviously broadcast themselves to earn money, but is this a crime? Those FMKorea f*ckers are the ones who delude themselves and commit the real crimes
teens stories

[teens stories] WRITE DOWN THE SMALL CONSIDERATE ACTIONS THAT MAKE YOU FEEL GOOD!!