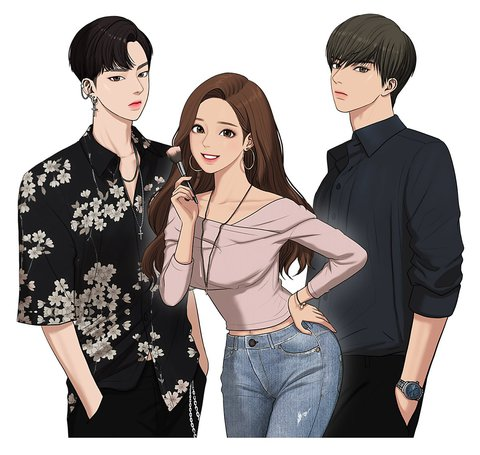 Seriously from the fact that Jookyung was bullied just for looking ugly in school and with makeup alone, she became pretty and her school days bloomed in high school… And also the fact that she has anxiety issues and isn’t able to meet her friends if she doesn’t have makeup on… Seriously this probably is supposed to highlight the negative effects of lookism..? But instead, rather than seeing this as an issue, in True Beauty, it’s using it as a propaganda to tell kids that “women need makeup~” “women need to look pretty and popular so nobody will look down on you~” and planting this kind of mindset. And I feel like the author is unable to draw Jookyung as someone independent unlike the male leads. What generation do we live in now?;;
post response:
[+254][-16]
original post: here
1. [+105, -0]
Not sure about this, but it’s true that the story f*cking sucks. I find it so so that people only read it because of the drawings
2. [+90, -0]
I seriously can’t comment on other things, but the story is boring. At first, it felt kinda refreshing but it slowly got boring
3. [+51, -1
Isn’t the entire hype around True Beauty about the drawings…?? The story is becoming more and more bad and the way it’s brainwashing? you into prioritizing lookism is bad
4. [+30, -0]
But content aside, True Beauty kinda reminds me of Haha Universe. Nobody around me watches this, but it’s still #1 among webtoons. Is this the female chodings’ pick???
5. [+27, -0]
I feel like everything in the story comes from what the author experienced herself to a certain extent. If you look at her past pictures on IG, it was all about flaunting luxury brands
6. [+19, -0]
Lookism is clearly prevalent in society however, the part where the author did wrong was to put the reality as it is in the webtoon without criticizing it so people think that this is problematic. Why are so many people unable to differentiate this? There’s a ton of school violence happening in real life, but there’s a difference between portraying school violence and portraying school violence while criticizing it
teens stories