T/N: the post is a long screenshot so we’ll translate the text) 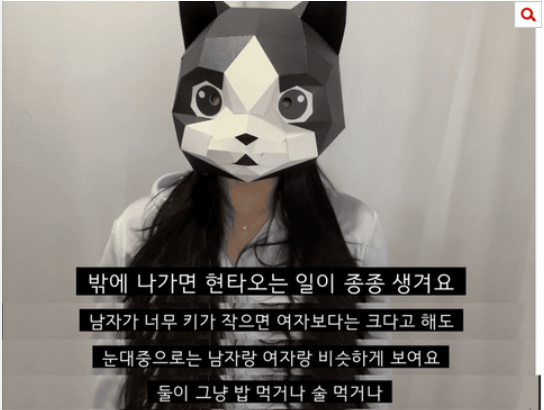 “- Reality checks sometimes happen when we go outside.

– If the man is too short, even if he’s taller than you
– Visually, he will look the same height as the girl
– When the two of us go to eat or drink,
– And that we sit in front of one another to talk, it’s fine but
– When we go out, we can see the reflection of our couple everywhere
– So when we stand up next to each other, like in the elevators on in front of a glass door, we can see our reflection.
– In those times, I really get a reality check
– I’m not even comparing our heights
– But seeing us standing close to each other,
– I’m thinking “so he’s seriously short”
– And when we went out, we ran into a couple where the girl was tall but so was the guy
– I am 164 and my boyfriend is 167
– You could tell right away that the girl was above 170 and that the guy was above 180
– I don’t know why but I felt defeated
– Clearly, it wasn’t like we were in a competition with that other couple
– And I don’t know about that couple’s life but
– I just felt like “we lost, I lost”
– Also, when we take full-body pictures together… it’s seriously..
– If we hold hands and take pictures standing side by side,
– We look like some picnic picture taken at the kindergarten…?
– Just watching dramas, there are comments saying things like “the height difference between the male and female leads is so heart fluttering ㅠㅠ” right?
– To be honest, it looks more natural when the man and the woman have some kind of height difference so I don’t think that we can give off that pretty couple vibe in our pictures
– Additionally, things like this also happens
– For shorter men, they usually have been ranked lower among guys ever since they were little right?
– Because of that, when they  meet with his friends, the girlfriend of the shorter guy also is ranked lower by association
– So it’s possible that she gets looked down upon or that she gets lesser treatment.
– For example, when we meet with my boyfriend and his friends and that his friends start teasing him and make fun of him, even though it might just be something they usually do, I somehow feel like I’m also getting teased.
– Even for small things like distributing the chopsticks or water, they would always give it to me last.
– I feel like if I was alone, I wouldn’t be treated like this
– I start thinking “is it because I’m his girlfriend that I’m being neglected?”
– There might be people thinking “aren’t you too self-conscious of what others think? As long as the two of you are together, that’s what matters~” and of course, that’s possible too
– But to the people who really dated a shorter guy, I feel like most of them would relate to me
– To be honest, it’s all because of this.
– Even for people who first thought “even if he’s really short, I like him for other reasons so it’s fine~ we can overcome this!”, being like this in public will unintentionally make you feel a bit embarrassed or ashamed
– So in the end, they couldn’t overcome the wall of height and ended up breaking up
– I’ve seen a lot of cases like these”
post response:
[+786][-70]
original post: here
1. [+269, -31]
But dating shorter guys do somehow gives you a reality checkㅋㅋㅋ They weren’t all my boyfriends but I’ve seen it as a dongsaeng. To be honest, I was embarrassed that he was shorter than me
2. [+231, -16]
But if he’s not above 170, it’s a bit…unless it’s a real love and that you were able to overcome everything, it’s indeed embarrassing… They should be at least 170 so that hanging out wouldn’t be embarrassing
3. [+213, -129]
Isn’t her victim mentality too strong?
4. [+112, -33]
That guy’s “ranking”ㅋㅋ
5. [+100, -9]
But if it was a successful short guy, it would be a different story. I’ve seen a lot of guys who think that height is the only strength who are both insecure and pathetic
6. [+88, -6]
But isn’t 164 for girls usually on the taller side? But if the guy is 167, the reality check must be real
teens stories