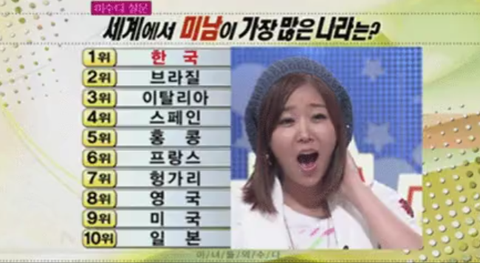 “The country that has the most flower boys?

1. Korea
2. Brazil
3. Italy
4. Spain
5. Hong Kong
6. France
7. Hungary
8. England
9. USA
10. Japan”
post response:
[+891][-54]
original post: here
1. [+375, -14]
Ah this is a bit disturbingㅋㅋㅋ
2. [+333, -31]
This is how the media sneakily appraise Hannams while on shows like Global Talk Show, they are praising foreign women while hating on Hannyeos (T/n: Global Talk Show is a show with beautiful foreign women discussing societal affairs)
3. [306, -24]
This is what people were saying even up to recentlyㅋㅋㅋ There are a lot of men who think that Korean men are the most attentive and treat women the best. But recently, these talks stopped after the videos of the YouTuber Korean Englishman made with English high schoolers went viral… It’s impressive how Korean men don’t say such bullshits anymore ㅋㅋ because their vigor got killed off. (T/N: Korean Englishman made a series of videos with high schoolers from an all-male high school and it went viral in Korea. Most of the people talked about how mannerly and nice (and handsome) the foreign kids were, etc.)
4. [+152, -2]
The time when Korean women were gaslit 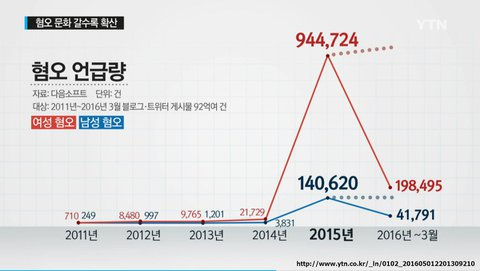 Blue line: male-hate)
5. [+127, -1]
It’s been over 10 years and they still believe this bullsh*t. Seeing how they still can’t get into their right minds because of the feminists’ blow, it seems like Hannams’ whole DNA are wrong. If you look at our present time, because of Hallyu, Korea is becoming more famous but even foreign press have pointed out Korean men’s hate towards women a lot
teens stories