(What is your opinion about ‘2521’s minor and adult controversial love line?
23%: It’s worrying
77: It’s just a drama)
In the midst of a controversy over the love line between Na Hee-do (Kim Tae-ri) and Baek I-jin (Nam Joo-hyuk), the protagonists of the drama ‘Twenty-five Twenty One’, a survey was conducted and about 8 out of 10 netizens thought that there were ‘no problem’ with the plot.
The portal site ‘Nate’ conducted a poll asking for opinions on the love line controversy between the minor and adult in ’25 Twenty One’ from the 14th to the 24th through the entertainment POLL category.
A total of 3,669 netizens participated in this vote, and as a result, about 77% of the total participants, or 2,836 people, said that there were ‘no problem’. The number of netizens who answered that they were ‘worried’ about the love line controversy was 833, only about 23%. 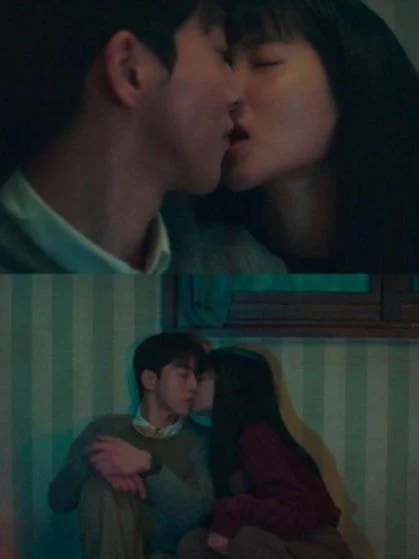 original post: here
1. It’s because TheQoo lives in their own worldㅋㅋㅋ I don’t care about this drama at all and the people who are watching this drama don’t feel any issue at all. Most people don’t care about some 20 y.o’s dating..
2. It’s true that there are problematic parts but I was shocked at how much hate this got
3. But the amount of votes is so smallㅋㅋ only the fans must’ve voted
4. If this is “only a drama”, then you should be fine with the distortion of history too ㅋㅋㅋㅋ A minor dating an adult is disgusting and I don’t want to see it on TV
5. But isn’t TheQoo the only place hating on it..? I didn’t think that there was anything problematic but as soon as you have a different opinion, you’re labeled as human trash. Just watch the drama quietly. There are a lot of netizens like me too
6. If a drama is just a drama then Joseon Exorcist and Snowdrop shouldn’t be problematic either? Aren’t these just double standards?ㅋㅋㅋㅋ
7. It’s true that this is only controversial on community sites
8. If everything is just fiction, then why are we making a fuss about historical distortion? About the beautification of the NSA? ㅋㅋ then, everything can be broadcastedㅋ Stop saying that this is a community-sites-only issue. This has repercussions in real life so that’s why people are complaining
9. This got way too much hate. They are talking like the male lead was committing a crime against a minor or something
10. Empty brained fools
11. The biggest issue with this drama are people who don’t know why there’s an issue…
theqoo