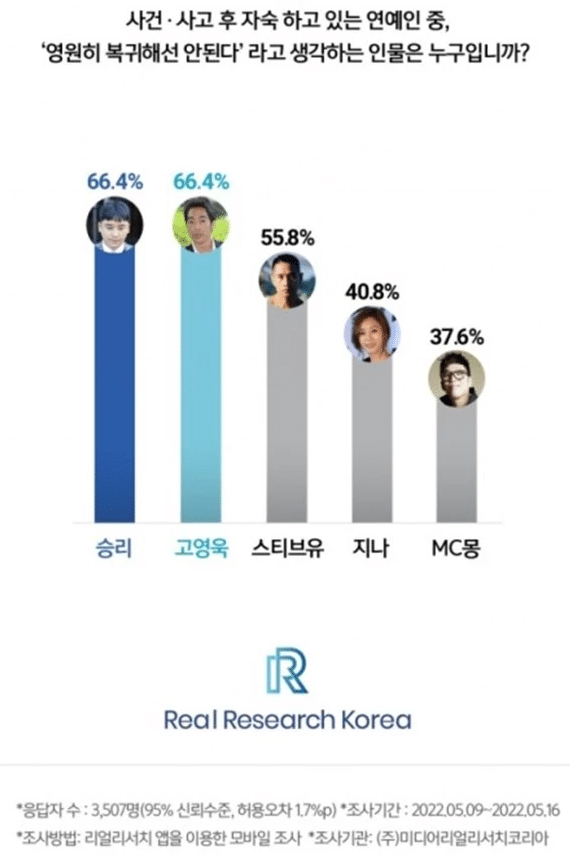 Celebrities who have been reflecting ever since their controversy/scandal

Who are the celebrities you think should “never be able to return”?
66.4% – Seungri
66.4% – Go Youngwook (t/n: s*xually assaulting minors)
55.8% – Steve Yoo (t/n: Korean singer who evaded military and became an US citizen, he was subsequently banned from coming back to Korea)
40.8% – G.NA (t/n: pr*stitution)
37.6% – MC Mong (t/n: draft dodging charge after removing 2 teeth to evade military)
MC Mong is amazing… To be linked to that lineup
original post: here
1. Why is G.NA here?ㅋㅋㅋㅋ
2. The 4th person isn’t at the level to be linked with these people. I would hate seeing all of Seungri’s group and honestly I just hate him
3. Seungri is the wall
4. G.NA is really considered that level?
5. Lee Kyungyoung, Seo Sewon, Isu, Jung Joonyoung
(t/n: Lee Kyungyoung (actor) – pr*stituting minors, Seo Sewon (comedian) – domestic abuse, Isu (singer) – buying teenager pr*stitutes in the army)
6. Go Youngwook was quite severe
7. Should add Jung Joonyoung and Isu
8. Seungri, Go Youngwook, Jung Joonyoung and Isu should never appear again
9. I was wondering how Go Youngwook didn’t get #1?? Then I realized who #1 was. *nod*
10. So Seungri (with Jung Joonyoung and others) were strong enough to bury the others?
theqoo