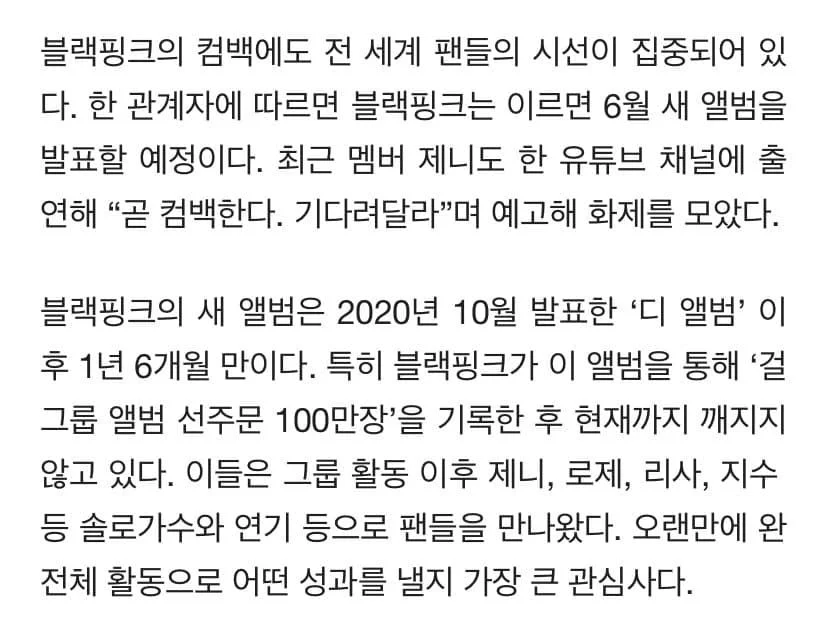 Fans around the world are also paying attention to BLACKPINK’s comeback. According to an official, Blackpink is expected to release a new album in June at the earliest. Recently, member Jennie also appeared on her YouTube channel and said, “I will comeback soon. Please wait.”
BLACKPINK’s new album is the first in 1 year and 6 months since ‘The Album’ released in October 2020. In particular, after BLACKPINK recorded ‘1 million pre-orders for girl group albums’ through this album, a record that has not been broken until now. Since their group activities, […]
The biggest concern is what kind of results will be achieved through a group activity after a long time.
—
It’s from an official
source:  https://entertain.v.daum.net/v/20220426065728629
original post: here
1. So they’ll comeback in June with a single and a full album in August
2. I trusted in Jisoo’s words.. That they would comeback when “it’s hot”… So it’s not going to be in fall ㅠ I hope that we get a hip song that only BP are able to pull off. BP’s rap is seriously too good. I want to hear Jennie and Lisa’s rap
3. If they’re coming back in June, it means we’ll have 2 songs and in August 4 songs and in October 8 songs
4. I felt like they would comeback in June. The fact that they’ll comeback with 2 songs means either YG is really late in composing or they barely have any songs for them
5. ㅋㅋㅋㅋㅋㅋ Everyone thought it would be in Fall at least. It’s freaking funny.
6. Kyah we’ll be able to see Lisa’s dance
7. I always found BP likable, but their comeback terms make no sense. I feel like the fans are dropping out because of it tooㅠㅠ This is making me cry
8. They would mean June of next year too right..?
9. So the earliest they’ll comeback will be in June, so we should expect them in July or August right???
10. How many times could BP go to the army?
theqoo