T/N: From the QRTs it seems like they have also refused ATEEZ, it’s the same cafe who refused the Rocket Punch member in our earlier post

“Sorry for hurting you” 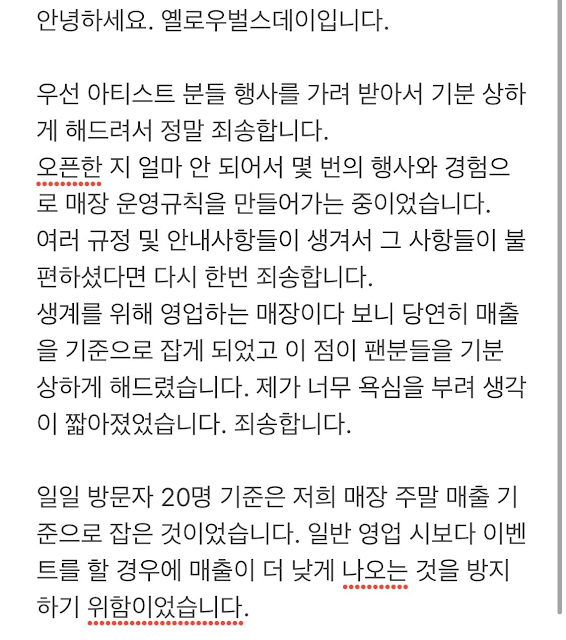 Hello this is Yellow Birthday.
First of all, sorry for offending anyone through by not being able to cover the artists’ event.
[The cafe] hasn’t been opened for a long time and have experienced handling events only a few times, hence, we are still in the process of establishing business rules for the cafe’s operation.
We apologize once again for making anyone uncomfortable through the rules and details that we made.
Since we make a living by running our business, of course we need to set a standard for our sales target. We apologize to the fans for hurting them through this. I was too greedy and short sighted. Sorry.
Our usual daily visitor count of 20 is based off our sales on the weekend. In the case where events are predicted to sell less than our usual operations, we will prevent them from happening. 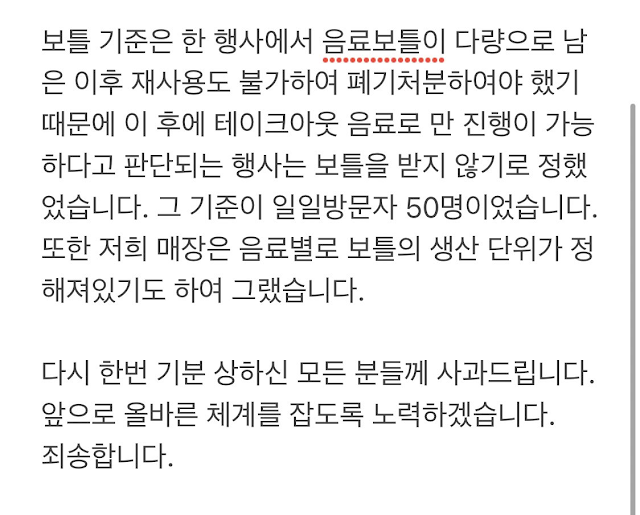 The bottle standard was set because a large amount of beverage bottles were left after one event, they could not be reused and had to be disposed of. After this incident, we only accepted takeout drinks and events would not allow any beverage bottle to be given out. Right now, our standard is set to 50 visitors per day. Moreover, This was because the store had a set production unit limit for each drink.
We apologize once again to the fans who’ve been hurt. We will work hard to set the right system moving forward. Sorry.
original post: here

1. Isn’t this obvious? Depending on the level of the idol, the sales will be different.

I don’t understand the kids swearing at the business owner
It’s not like they said they’d accept and then cancel.
Do you know how hard it is to make a living nowadays?
> Ok ok but then it can’t be helped that people will talk about it either… Since they discriminated ^^
2. Do they think that other cafes have it easy so they’re accepting everyone?ㅋㅋㅋㅋ They probably find idols fans laughable so they treat them while being half as*ㅋㅋㅋ Don’t you guys hate it if you walk into a luxury store and they treat you half as* because they think you won’t buy anything?ㅋㅋㅋ Do idol fans deserve to be ignored?
3. They don’t even have anything planned so they’re refusing, but they’re refusing because “they’re planning” to accept someone else? ㅋㅋㅋㅋㅋ They only have 20 visitors a day as a standard yet they’re worried about not selling because of an idol so they refused? And they think it wouldn’t hurt anyone? So should idol fans only fangirl on A-list idols for these businesses?ㅋㅋㅋ It’s freaking dumbfounding. Can’t they just ask the fans to cover? For example 100,000won if it’s below 20 people, and more if it’s less than 10 people
4. I saw the tweets and this is even more severe. I’m not even a fan but they’re really being so obvious
“Cafe Yellow Birthday even has a priority birthday list for 2022 already”
Picture tweet:
We receive 2022 rental inquiry!
Dates you can book:
01.29~02.01 – NCT Doyoung
March priority booking:
BTS Suga
03.11~03.13 – TXT Bumgyu
April priority booking:
Seventeen Mingyu
The Boyz Sunwoo
NCT Jeno
The Boyz New
5. I f*cking pity the cafe’s owner
6. I can relate to their reasoning, but they have to take the blame if potential clientele decide to talk about it when they’re blatantly discriminating like that
7. Why are people comparing this to taxi drivers refusing to take a passenger?ㅋㅋㅋㅋ Taxi drivers refusing is actually illegal
8. I can understand, but it still makes you feel disgusting
9. I hope every idol fans knows about this, so that they will never book here even though my bias is a A-list idolㅋㅋ
10. So the nugu idols will not be able to fill even 20 people..? That owner is quite funny. It’s not like A-list idols are asking their cafe to host birthday events, why do they “plan” to host it for them by saving the dates….? Their main target is idol fans, but they sure do business weirdly
theqoo