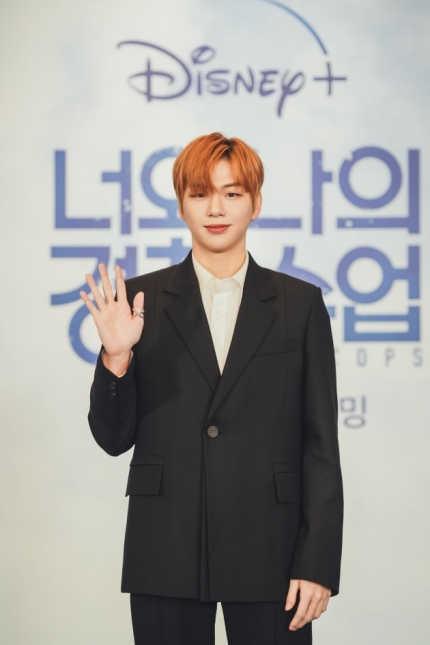 Singer Daniel Kang challenged himself with his first acting role in the original series ‘Rookie Cops’. He has just started walking that path, so he has a lot of potential for growth, but he has a long way to go as an actor.
The original series ‘Rookie Cops’ was recently released through Disney Plus. ‘Rookie Cops’ captures the campus life of dazzling, passionate young people who are fearless yet have many unanswered questions, but are full of enthusiasm. Since only episodes 1 and 2 have been released, there has been no strong emphasis on campus life nor love development yet.
[…]
The first original series that Disney Plus introduced was ‘Rookie Cops’. The male lead is Daniel Kang, who has established himself as a solo singer from the group Wanna One. It is known that Disney Plus cast Daniel Kang, despite having no acting experience.1
Kang Daniel confessed that he had been asked whether he had intention to go into acting for three years. He said, “I always thought that acting was a professional field and that actors are in their own domain so if ever the opportunity came to me, I had to work hard” His first choice work was ‘Rookie Cops1’. He decided to appear as if possessed because he thought it would be the last youthful thing for him.
In episodes 1 and 2 of ‘Rookie Cops’, which was released on January 26, the police academy newbies had a harsh declaration ceremony. Kang Daniel played the role of Wi Seunghyun, a senior police officer who has a a big sense of justice and cannot tolerate any injustice.
In episodes 1 and 2, Kang Daniel’s appearance is brief. The length of his lines is also not long. At most two sentences. It seems it’s still too early to discuss his acting skills with only the 2 episodes released. However, even in that short amount of time, you can feel that his range of emotions are limited and that his vocalization is lacking.
Kang Daniel is always shown being expressionless. Since there is not much change in his facial expression, the persuasiveness of his feelings and what he is trying to convey to the viewers is low. Also, the lacking vocalization and the fact that you can hear his Busan dialect affect his speech is disappointing. For an actor, vocalization is the foundation among the basics. You need a certain tone of your own for this.
Did Disney Plus see the protagonist in Kang Daniel by just looking at his potential? Of course, it is not possible to evaluate everything with just the first and second episodes of ‘Rookie Cops’. To judge whether he’s good or awkward is still ambiguous. ‘Rookie Cops’ is a 16 episodes drama. There is still a lot to be revealed. Kang Daniel has a long way to go as an actor. However, attention is focused on whether he will be able to show a change in image
source: here
1. I turned it off because I had no idea what he was trying to say
2. He should just… practice dancing
3. Both Jisoo and Kang Daniel are equally bad but look at the difference in media responseㅋㅋㅋㅋㅋㅋㅋㅋㅋㅋ
IU also was bad during Dream High days, but we need to stay consistent with everyone. If they’re bad they’re bad, do we need to lie about it?
4. I thought he was okay?
5. I didn’t have any expectations for the drama and ended up enjoying it and it put me in a good mood. Kang Daniel also delivered above my expectations. He’s so white and he even looked super pretty in some scenes that it shocked me. I feel like he’ll pull off these youth dramas well. But honestly, I almost dropped out after watching the first scene
6. I thought he did fine, I’ll look forward to ep. 3-4
7. His acting is something, but he doesn’t have the visuals to act
8. Kang Daniel’s posts is always like that –> people gives constructive criticism, not hate –> his fans start shielding him + treat everyone like a hater –> then this attract the actual trolls and haters who will come here only to bash his face
9. The people who are saying he did well are probably his fans… We already lost all kinds of objectivity from the start
10. Seriously the people shielding him, did you actually watch the drama?
theqoo