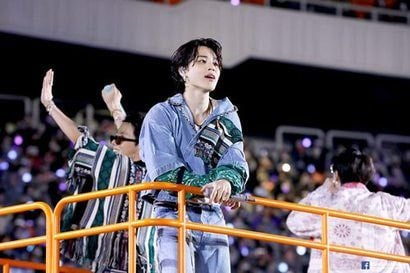 Big Hit Music has officially addressed reports that BTS’s Jimin’s apartment was temporarily seized due to unpaid health insurance premiums.
On April 24, Korean news outlet Biz Hankook reported that the National Health Insurance Service had seized Jimin’s apartment at Nine One Hannam in Seoul on January 25 due to the singer not paying his health insurance premiums. Jimin first purchased the apartment for 5.9 billion won (approximately $4.7 million) back in May of last year.
According to the report, Jimin received four separate notices about the seizure by registered mail during the time that his apartment was temporarily seized, and the seizure was ultimately lifted on April 22 after he paid the overdue health insurance premiums.
CR: Soompi
original post: here
1. His company’s statement was disappointing. How could he have been unaware…
2. Wow it’s my first time seeing more than 4.8K comments here
3. So he went to hospitals all this time and isn’t aware of health insurance premiums?ㅋㅋㅋ
4. He’s such a nuisance to the team. If they went as far as seizing the apartment, there’s no way they never tried to contact him. It’s not like he paid right away after it was seized either
5. Leave him alone…
6. Sigh… so if you’re shielding him, you’re a fan… I’m disappointed in my bias but the fans are also… damn..
7. It is said that he had 4 notice of seizure instead of 4 of the reminder notices? Whether the notice went to himself directly or to the company, there’s no way he wasn’t aware of it. Even before getting to the point of being seized, don’t they pressure you a lot? It’s not like he was touring overseas for over a year either… hul
8. I’m a fan but ㅜ I can’t shield this f*ck ㅠㅜㅜㅜ He did such a good investment in his luxury building so there’s no way he didn’t know about this.
9. Wow the number of comments
10. Because they are Bangtan, people are shielding them for this…
[theqoo] BTS JIMIN, CONTROVERSY OVER HEALTH INSURANCE PREMIUMS, WILL THIS SPREAD OVER THE ENTERTAINMENT INDUSTRY ? 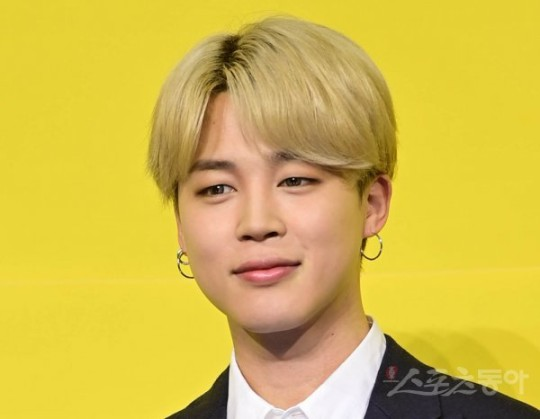 Regarding this matter, the company is the first to receive all mail that arrives at the artists’ dorms, and in the process of relaying it to the artist, a portion of the mail was omitted by mistake.

Due to Jimin’s activities abroad starting at the end of last year, his extended period of rest, and his scheduled activities abroad after that, he was unaware of matters such as [his premiums] being overdue. As soon as he found out, he paid the arrears in full, and at present, the situation has been resolved.
We apologize for the fact that we have given the artist and fans cause for concern due to our company’s negligence.
source: https://entertain.naver.com/now/read?oid=382&aid=0000975554
original post: here
1. Look at the way they’re trying to shield him ㅋㅋㅋㅋㅋㅋㅋㅋㅋ
2. So basically all idols who are promoting overseas are skipping their health tax? Pfft
3. It’s basic tax, how old are you? Aren’t you in your late 20’s? You have to pay your taxes, so you don’t even look at the basic bills? Are you a baby? Do I have to take care of all your basic necessities for you?
4. How is this related to his busy schedules? Does he not have a single bank account in Korea? Bank applications can be easily downloaded, he can’t even do that because he’s busy with international schedules? All bills are sent via e-mail via mobile phone, so do you get rid of internet when you go on international tour? He doesn’t even pay his health premium… He doesn’t want to enlist… Is this the mindset of idols who are supposed to be for our national prestige?
5. Does his fans not get a reality check even after this ??????????? Go invest your energy for your own self-growth at this point
6. So he can’t pay because of his international schedules? ㅋㅋㅋㅋㅋㅋㅋㅋㅋㅋ Claiming to promote the national prestige while paying attention to only the things you want. As expected, he’s a super star
7. Wow…. Meanwhile he’s earning so much moneyㅋㅋㅋㅋㅋㅋㅋㅋㅋㅋㅋㅋ
8. How can you be unable to pay your arrears…?? We’re living in a world where you can simply pay with a click on your bank app
9. The shielding is hilarious
10. The people shielding himㅋㅋ You guys are so low
[theqoo] BIGHIT – JIMIN, UNPLEASANT JUSTIFICATION “HEALTH PREMIUM ARREARS, YOU SHOULS FIND OUT ONCE YOU VISIT THE HOSPITAL”
“If you use a hospital during a period of non-payment of health insurance premiums, it is common to notify the person concerned.”
Group BTS Jimin had his apartment confiscated in January due to non-payment of health insurance premiums. Then, on January 30, the news of him testing positive with COVID19 and his appendicectomy was announced, and the seizure was canceled on April 22 after confirming the full payment of the arrears.
The National Health Insurance Corporation explained to Donga.com, “In general, if you use a hospital in a state of infraction, you will be notified.” But Jimin, who even had appendectomy, did not know why he was in arrears. Did the company Big Hit Music’s corporate card even handle expenses such as his own surgery?
Next, the National Health Insurance Corporation answered the question “Does it take three months for the foreclosure to be canceled?”. They replied “If you pay in installments, it may take (three months), but usually it takes 1-2 days to process.” However, Big Hit Music said in a statement, “As soon as we confirmed this, we paid the full amount of the arrears, and this case is now closed.” It is also questionable why Jimin maintained arrears for three months after the seizure.
In addition, the National Health Insurance Corporation explained the notification method by saying, “We sent text messages to himself as well as regular mail.”
Moreover, an official added “To know that Jimin didn’t validate his bills in real-time, it probably means that he has really lazy personal tendencies.”
original post :here
1. I don’t even think he did it because he’s greedy for money
2. He earns so f*cking much, why isn’t he paying them? I can’t understand
3. Disappointed
4. He just made it extra difficult for himself to get exempt by the army
5. This is seriously so so, he totally ruined his image
6. Honestly 20M won for BTS is just pocket money to them (15KUSD), I can’t understand how they didn’t think of paying
7. We’re not even talking about 200M won but 20M won for him, I can’t understand why he didn’t pay
8. No but… They should try to stop justifying for him and just make him apologize
9. Ah seriously what a turnoff, it’s not like he has no money either
10. His company is f*cking making this worse for him. They’re not even making him pay yet they’re giving him some nonsense explanations ㅋㅋㅋㅋ He should just acknowledge his own infraction and make him apologize and say he’ll pay them on time next time and this would’ve been resolved more cleanely
[enter-talk] BANGTAN JIMIN’S OFFICIAL STATEMENT CAME OUT ABOUT THE BUDONGSAN LATE HEALTH INSURANCE PREMIUM PAYMENTS 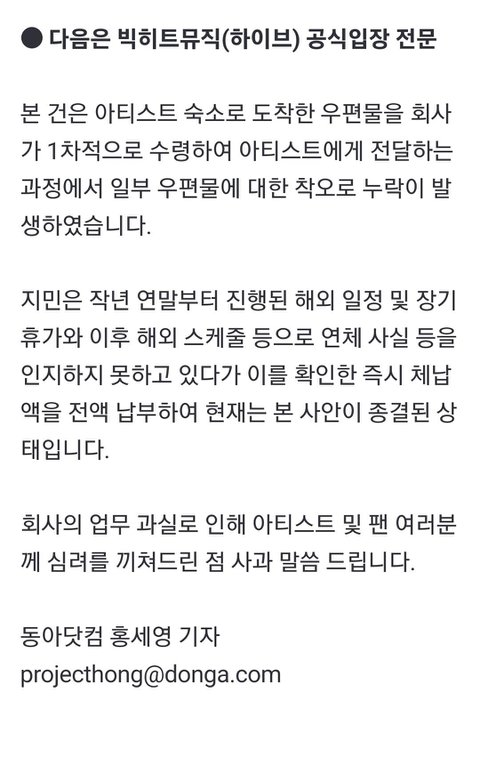 “Regarding this matter, the company is the first to receive all mail that arrives at the artists’ dorms, and in the process of relaying it to the artist, a portion of the mail was omitted by mistake.
Due to Jimin’s activities abroad starting at the end of last year, his extended period of rest, and his scheduled activities abroad after that, he was unaware of matters such as [his premiums] being overdue. As soon as he found out, he paid the arrears in full, and at present, the situation has been resolved.
We apologize for the fact that we have given the artist and fans cause for concern due to our company’s negligence.”
CR: Soompi
That’s what they said ㅇㅇ
post response:
[+181][-52]
original post: here
1. [+279, -59]
To be honest, do you really think that he wouldn’t have paid if he had no money? Anyone can tell that he didn’t pay because he didn’t know
2. [+260, -38]
I’m a fan of another group but do you really think that he didn’t pay because he had no money?ㅋㅋㅋㅋㅋㅋㅋㅋㅋ even commoners can pay just fine ㅋㅋㅋㅋㅋㅋ he probably didn’t pay because he didn’t know at all
3. [+237, -37]
If he really wanted to steal money, he would’ve delayed payments way before this or evaded taxes. Even if the health insurance premium was expensive, it shouldn’t be over 3 million won. If he wanted to pocket the money, would it make sense that he paid his fees just fine all these years and suddenly stop paying?… Besides, even if he paid before getting seized, there would’ve still be articles about it. If you wanna hate on him, at least get a brain. This is such a forced controversy
4. [+54, -7]
He’s been paying his taxes through and through for 10 years and was paying his building fees just fine and if he defaults for a few months, it gets taken out automatically but people are busy hating on him now given the timing ㅋㅋㅋㅋㅋㅋㅋ Jimin even donates a lot
5. [+46, -7]
If he wanted to evade taxes from the start, he could’ve overstated the number of staffs or understate the sales but seeing how he’s defaulting payments in such an obvious way, you can tell that it was a mistake. People are bullsh*tting about tax evasionㅋㅋㅋㅋㅋㅋㅋㅋㅋㅋ why are you guys so dumb, you f*ckers?
6. [+39, -11]
But that’s a normal thing that everybody faced at least once. Seeing people hate him so intensely is strange 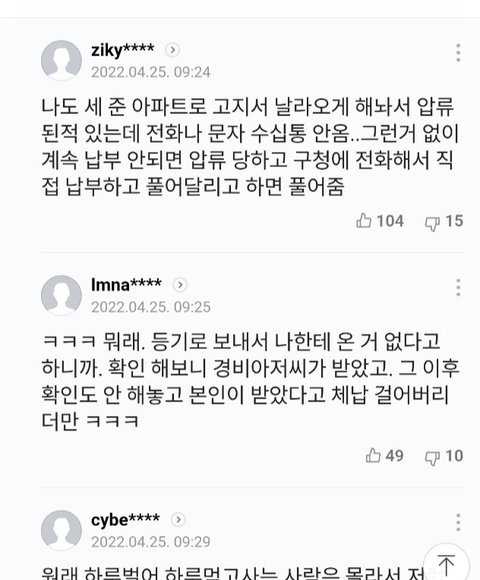 “[+104, -15]: Me too, I lost the bill to my rented apartment and got it seized once. They never called nor texted me about it.. If you keep on defaulting in the payments, your apartment will get seized so if you go to the borough office and pay the fees, they will resolve it for you
[+49, -10]: ㅋㅋㅋ what are they saying? (I/they?) sent the registration but it never got to me. I checked and turns out, the security ahjussi received it. He didn’t double check and thought that he was the recipient who defaulted in the paymentㅋㅋㅋ”