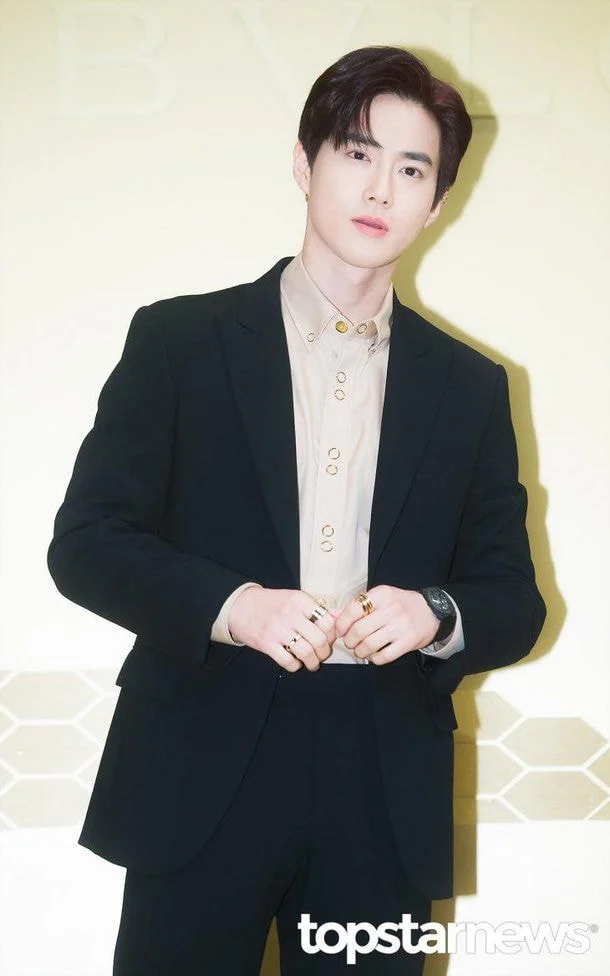 On the 15th, Suho held a fansign event at a cafe in Busan and communicated with fans.
During the event, Suho said, “I feel happy that I can give my fans good memories.”
“Actually I didn’t think that this event was something impressive. Yet I thought I was doing everything.” “Idols nowadays have became so lazy” and laughed.
He added “Is it the company’s issue? As companies are getting bigger and the idol market is crowded, they don’t seem to care about every little details anymore. It’s a shame”
He received responses such as “He’s this big of a senior already, of course he can say this” “This is correct” “His mindset is why he’s going for the long run” “You shouldn’t nitpick this”.
original post: here
1. Is he trying to put the other idols down to boost his own ego?ㅋㅋ
2. Huh? What is he saying?
3. Sigh if you heard what he actually said, it’s definitely not the way the article is saying
4. Huh…? Is he randomly just picking on other idols like that..? Are there videos of it?
5. Is this really a necessary comment..
6.

“I’m so happy because I think I was able to give the fans a lot of good memories. Actually, I didn’t think this was some impressive even. I thought I have done everything. I thought I did everything so I thought that someone must’ve done a 9 lines acrostic poem on their photocard too? I think idols have became so lazy nowadaysㅎㅎㅎIs it the company’s issue? As companies are getting bigger and the idol market is crowded, they don’t seem to care about every little details anymore. It’s a shameㅎㅎㅎㅎ”

7. You can straight up tell that this is a jokeㅋㅋㅋㅋㅋㅋㅋㅋㅋㅋㅋㅋㅋㅋㅋㅋㅋㅋㅋㅋ The title is desperately trying to drag him
8. ㅋㅋ ;; But even as a joke, this is so so to say, why is he picking fights with idols nowadays?
9. You need to be careful speaking about idols nowadays, does he not know that?
10. But the fact that he mentioned his agency with it seems like he’s actually serious about thisㅋㅋ
[enter-talk] WHAT DO YOU GUYS THINK OF EXO SUHO’S COMMENT? 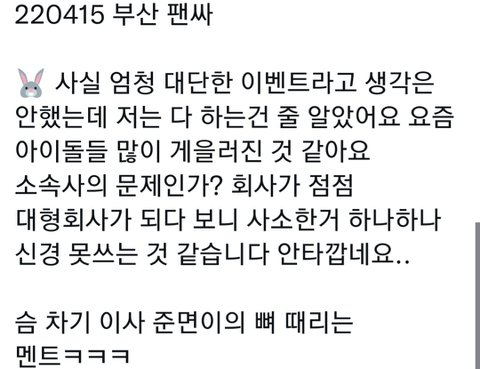 Junmyeon is hitting the SM upcoming acts on their bonesㅋㅋㅋㅋ
post response:
[+539][-35]
original post: here
1. [+351, -11]
Of course what he’s saying is true. What he said about the company and what he said about idols becoming more lazy. Kids who are getting mad about this just prove his point. If your oppas weren’t lazy, why would you get mad?ㅋㅋ
2. [+333, -13]
Do you think EXO’s seniority can be compared with any other idols’ seniority?ㅋㅋㅋㅋㅋ He’s not acting with a seniority power trip. It’s true that idols nowadays aren’t as hardworking as EXO was during their prime.. He’s a mental pillar to the fans, people who are bullsh*tting calling hims power trip makes me so upset
3. [+279, -9]
He’s f*cking refreshing
4. [+240, -5]
Suho’s event: he paid the return flight tickets for all fans who attended his Jeju fansign + He held the fansign at Ocean View cafe in Jeju + He also gave free drinks to everyone who came + He let fans take pictures with him at Jeju
5. [+228, -5]
As someone who never got into a controversy and who’s perfectly managing himself, I agree to what he’s saying
6. [+182, -2]
2nd and 3rd generation idols have made lots of fansigns in suburban areas. Nowadays, there are freaking lots of idols who are all busy playing overseas while eating thanks to the domestic fans. Just some weeks ago, a company was caught faking fansign winnersㅋㅋㅋ Honestly isn’t what he’s saying true? Kids who are getting mad at him must have really lazy biases
enter-talk