Contrary to concerns, the drama ‘Snowdrop’ is filled with content that criticizes and satirize the NSA. In episode 9, there was also an ambassador who compared the NSA to the dictatorship of North Korea.
In JTBC’s ‘Snowdrop’, which aired on the 9th, an argument between North Korean spy Suho (Jung Hae-in) and NSA agent Kang Mu (Jang Seung-jo) was depicted.
The two strongly criticized each other’s organization during the confrontation. Suho criticized the NSA to which Kang Mu belonged, as “a place that killed people who resisted the government’s tyranny as spies” and “a dog of the regime that trampled on the lives of innocent compatriots in order to create a state of public security.”
Regarding Kang Mu, he mocked him saying “And you are the bastard who is getting paid by them so how dare you criticize me?”
Source: https://entertain.naver.com/read?oid=008&aid=0004693987
original post: here
1. Ah~~~~ You’re trying so hard…
2. Ah impressive, ok then what are you gonna do about the earlier parts? Are you gonna change it? Was this part of the narrative?
3. Not watching
4. They want us to reflect?? You guys should reflect first
5. These posts are getting steadily released;;; disgusting
6. There are still people watching this?ㅋㅋ what a pathetic media play
7. ㅋㅋㅋㅋㅋㅋㅋㅋㅋㅋㅋㅋㅋㅋㅋㅋ
8. So the NSA who were protecting the citizens weren’t romanticized~~~ㅋㅋㅋㅋㅋㅋㅋㅋㅋ
9. Stop trying
10. ㅋㅋㅋㅋ the spy saying this ㅋㅋㅋ the beautification is severe
[enter-talk] SNOWDROP’S DIALOGUE TODAY THAT SHOCKED A LOT OF PEOPLE
(T/n: the whole post is made of screenshots of the conversation so we’ll just translate the text)

“Suho: Hey, NSA leader
The NSA that frames and kills people who fight against the tyranny of the regime. A dog of the regime that trampled on the lives of innocent compatriots in order to create a state of public security. That’s the NSA right?
And you are the bastard who is getting paid by them so how dare you criticize me.
Kang Mu: With the excuse of repatriation, the people who lie to countless gyopos and who trample on these gyopos’ lives. Aren’t they North Koreans? If you compare it to the South who created the state of public security, we are all the same.”
You kids who incited on the beautification, write us a reflection post
post response:
[+1,018][-274]
original post: here
1. [+317, -67]
Where are the people saying that they beautified the NSA and Chun Doo Hwan? So the kids who were against Snowdrop’s airing are Chun Doo Hwan’s supporters?
2. [+298, -3]
Today’s episode talked about the NSA’s brutality so if you’re still claiming that they are beautifying the NSA, it’s a proof that your head is seriously empty. You guys are brainwashed into believing that they are beautifying the NSA
3. [+282, -40]
Today, they even dragged back the female students who were taken hostage to forbid them to speak… the more you see, the more you’ll just get creeped out by the actions of the NSA
4. [+138, -14]
You guys must have had fun thinking you’re making an impact, gathering all together and pretending like you know about history and pretending on hate on the drama while bashing the celebrities and threatening the sponsors. You guys are just fueled by that excitement of tearing others down. The truth is out. I hope you guys go to hell
5. [+122, -7]
These people are crazy f*ckers

(Comment from TheQoo: do you guys not know that criticizing the NSA is beautification? Do you think that they could even criticize the NSA back then?)
[enter-talk] THE ONLY TRUE ARTICLE ABOUT SNOWDROP
There’s no other article that is reflecting the changes in public opinion than this one 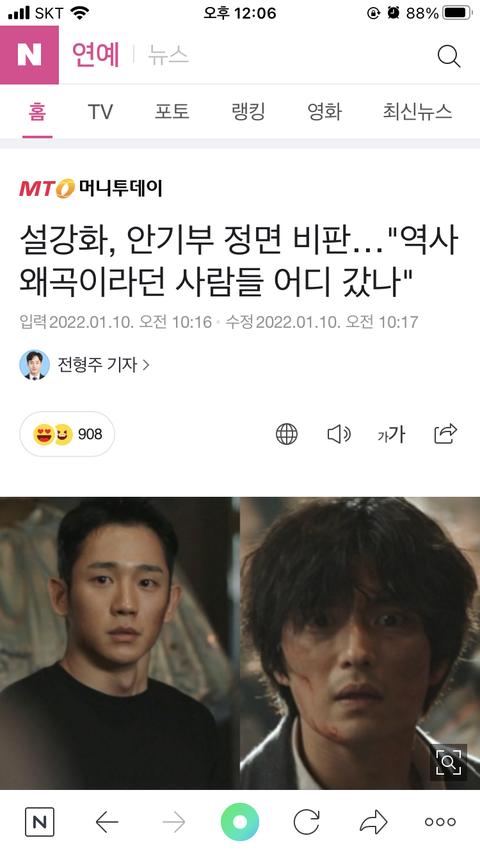 (T/N: this article is the same as the first one from theQoo above)
Also, this journalist also wrote an article supporting Snowdrop before the public’s opinion changed 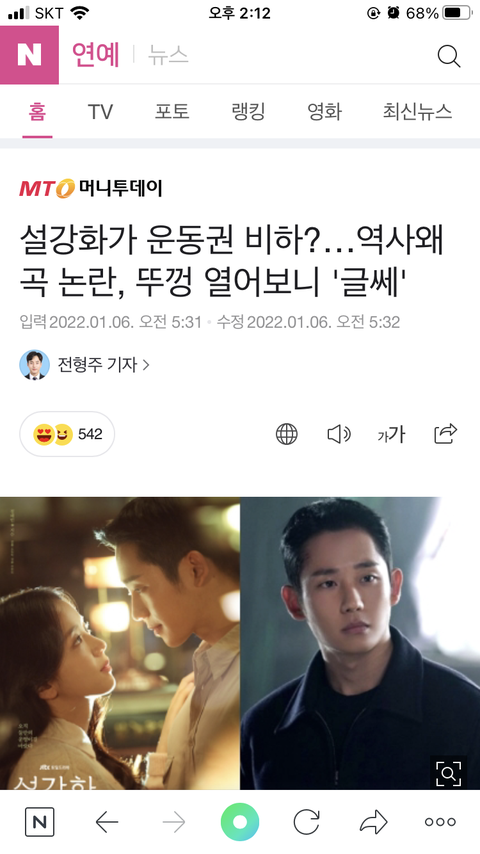 “Snowdrop is belittling the activists?.. historical distortion controversy, once the lid is uncovered, ‘who knows'”
post response:
[+206][-114]
original post: here
1. [+75, -32]
But with how TheQoo orchestrated this, shouldn’t they write an apology post on their site??? Weren’t they the root of all of this?
2. [+75, -32]
I hope that there are more articles ㅠ Snowdrop, fighting
3. [+60, -31]
I was f*cking pissed off at this being framed as beautification so they are just getting their karma back. This drama will definitely get re-evaluated
4. [+36, -27]
Sigh, they are persistent… I’m still not watching it
5. [+29, -15]
What Jisoo lived through in the pat 8 months: first of all, she was the target of the inferiority of people in their 10’s-20’s just because she’s from BP + not long ago, because she was using an iPhone, the ahjummas and ahjussis in their 40’s-50’s attacked her online + she was getting tormented on a daily basis by people who hate YG + male communities made a sh*t ton of s*xual remarks on her because of her dating rumors with Son Heungmin + she got eaten alive again because of Snowdrop’s controversies + because of 1 gif of her acting, there were videos on YT with millions of views dragging her…. If I were her, I wouldn’t even want to live
enter-talk, jisoo, snowdrop, theqoo