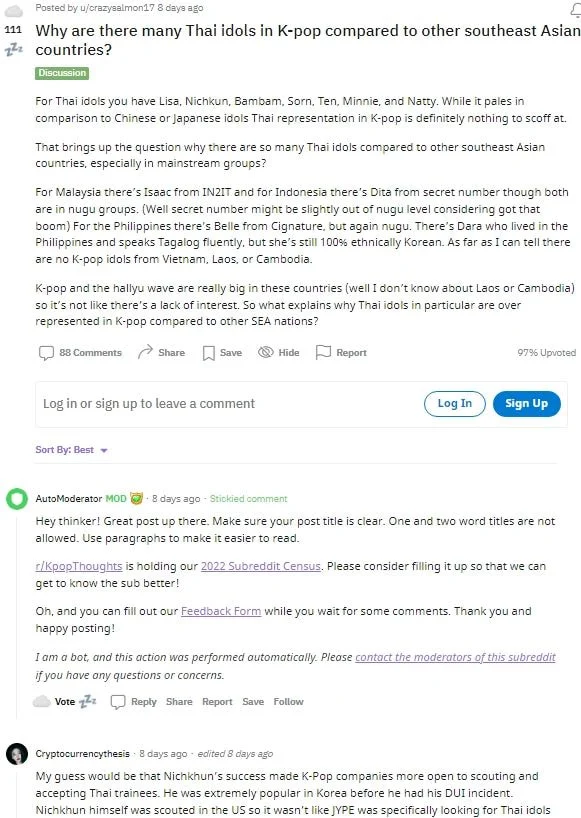 My guess would be that Nichkhun’s success made K-Pop companies more open to scouting and accepting Thai trainees. He was extremely popular in Korea before he had his DUI incident. Nichkhun himself was scouted in the US so it wasn’t like JYPE was specifically looking for Thai idols at that time.
>Many-Ad-9007
This tbh. Before Khun the only foreigner idols are Chinese. Khun was the first very successful idol not from China. He was literally everywhere prior to his DUI.
>NewSill
As a Thai, I confirmed this.
Sing48
The entertainment industry in Thailand is more developed than in other SEA countries. Their dramas are becoming popular in the rest of SEA, or at least in my country and while their idol industry is quite young, there have been a few shows centered around them and they have a music show of their own. Also, BNK48, the Thai group of AKB48 became really popular in Thailand a few years back and some of the newer female idols talk about how seeing them inspired them to become idols.
> seattlantis
A few BNK48 members actually auditioned in Korea first. Myyu was an SM trainee and Tarwaan was on the same audition show that Sorn was on (different season).
>> NewSill
Myyu wasn’t signed with SM yet but she did fly to train there a couple times but still part of the audition process. She got a call from SM to start the trainee contract a day after she signed with BNK.
LadyDrakkaris
There are a couple Vietnamese idols – Anh with Beauty Box and Hanbin with Tempest.
Pinkerino_Ace
As someone who had the chance to work in Thailand for couple of years, their Arts/Music/Entertainment industry is actually surprisingly developed.
mmhzbn
This is only backed up by loose general knowledge, but I guess a few demographic factors make Thai idols suitable ? Thailand has a higher ethnic Chinese population than many of their neighbours, and every Thai that became an idol looks very East Asian. Malaysia and Indonesia are muslim majority countries and even with many people following kpop, there’s just a much smaller pool that could/would be willing to go into the idol industry. Thailand is also doing better economically than many other SEA countries and while that might not mean much on its own, more rich ppl -> larger pool of families able to support their kids if they’re talented, as seen by literally every Thai idol coming from very affluent families. I could probably think of more details but this already turning into an essay..
> NewSill
Nah, by a number, Indonesia has the highest and Malaysia is not far behind Thailand. Singapore has the highest ratio.
joonpiters
i’ve once read that the thai entertainment industry is a lot more mature and has better connections globally in that regard. however, if i’m being honest, i think it all comes down to colourism and this hierarchy amongst asian countries created on the basis of wealth.
> crazysalmon17
That being said Nichkun (the first Thai K-pop idol) was scouted in California and he’s been credited for paving the way for other Thai idols so I don’t know how huge of a factor this specially plays.
Yeah that’s pretty sad. That being said there are fair skinned people in people like Indonesia, Philippines, Malaysia, Vietnam, etc.
(T/N: more comments on this thread)
original post: here
1. Interesting… Nickhun, Lisa, Ten, Bambam, Minnie… And there’s also a Thai member in the new male group that Big Hit will be debuting. Seems like a lot of big companies pick Thai people. It’s true that there are no political issues historically and also, they are not used for target market like China and Japan but even so, as foreign members the standards set for their skill is high… so that’s why a lot of them are talented too
2. I also agree that Nickhun paved the way. Also, for the Thai celebrity industry, unless you are rich or have connections, it’s hard to even consider becoming a celebrity so I think that these idols are already set apart from that point. Also, as foreign members, they bring in a lot of money and that must be the reason why their parents support them too. Also, it’s true that we can’t disregard the color of their skin…
3. There are a lot of Thai members are also good at English so it’s like killing 2 birds with 1 stone
4. But thinking about Nickhun’s impact when he debuted, he was seriously ㅋㅋㅋㅋㅋㅋㅋㅋㅋㅋㅋㅋㅋㅋㅋ he really opened the door. His face didn’t seem out of place and it’s true that there are no historical issues
5. Their visuals aren’t too different and our skin color is also similar….
6. I really think that the biggest reason is their visualsㅇㅇ Nickhun was indeed a big pioneer for Thai people and the Thai people who debuted in big companies after him also succeeded a lot. They all succeeded
7. Nickhun was indeed impressive
8. It’s because of Nickhun duh
9. But I feel like if they were Thai and had strong SEA visual characteristics, the reactions wouldn’t be as good. Even for SEA people, their features need to match our beauty standards
10. Having exotic visuals is important but I feel like the Thai idols we have are also better at Korean (than other foreigners)
11. I’ve fangirled on groups who had Thai, Japanese and Chinese members and from that standpoint, I feel like Thai idols were all fine
12. Nickhun was seriously handsome during his legendary daysㅠㅠ 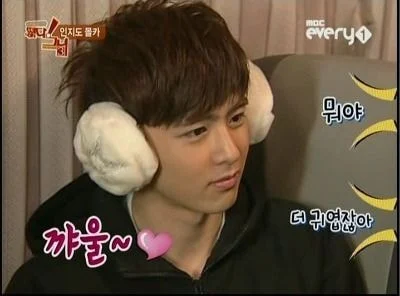