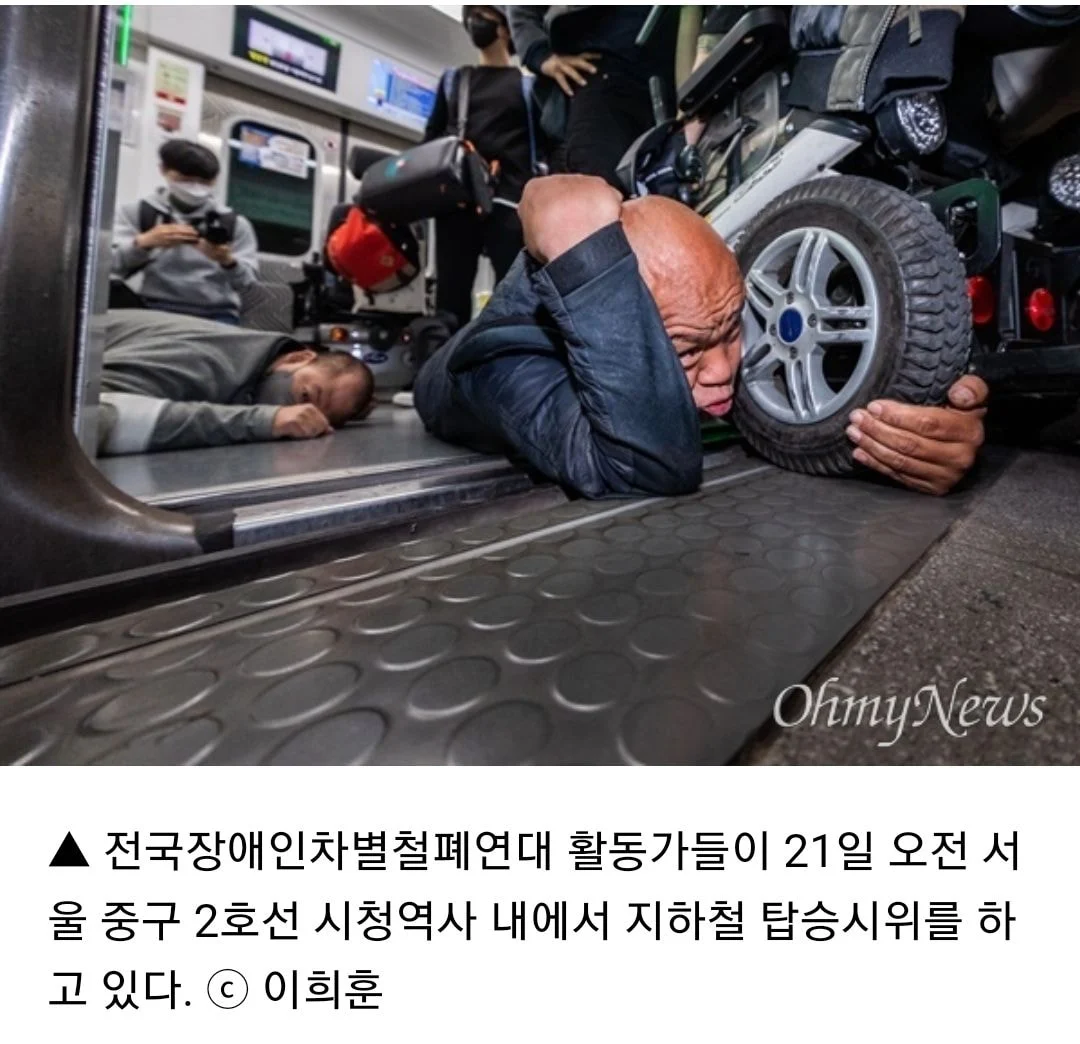 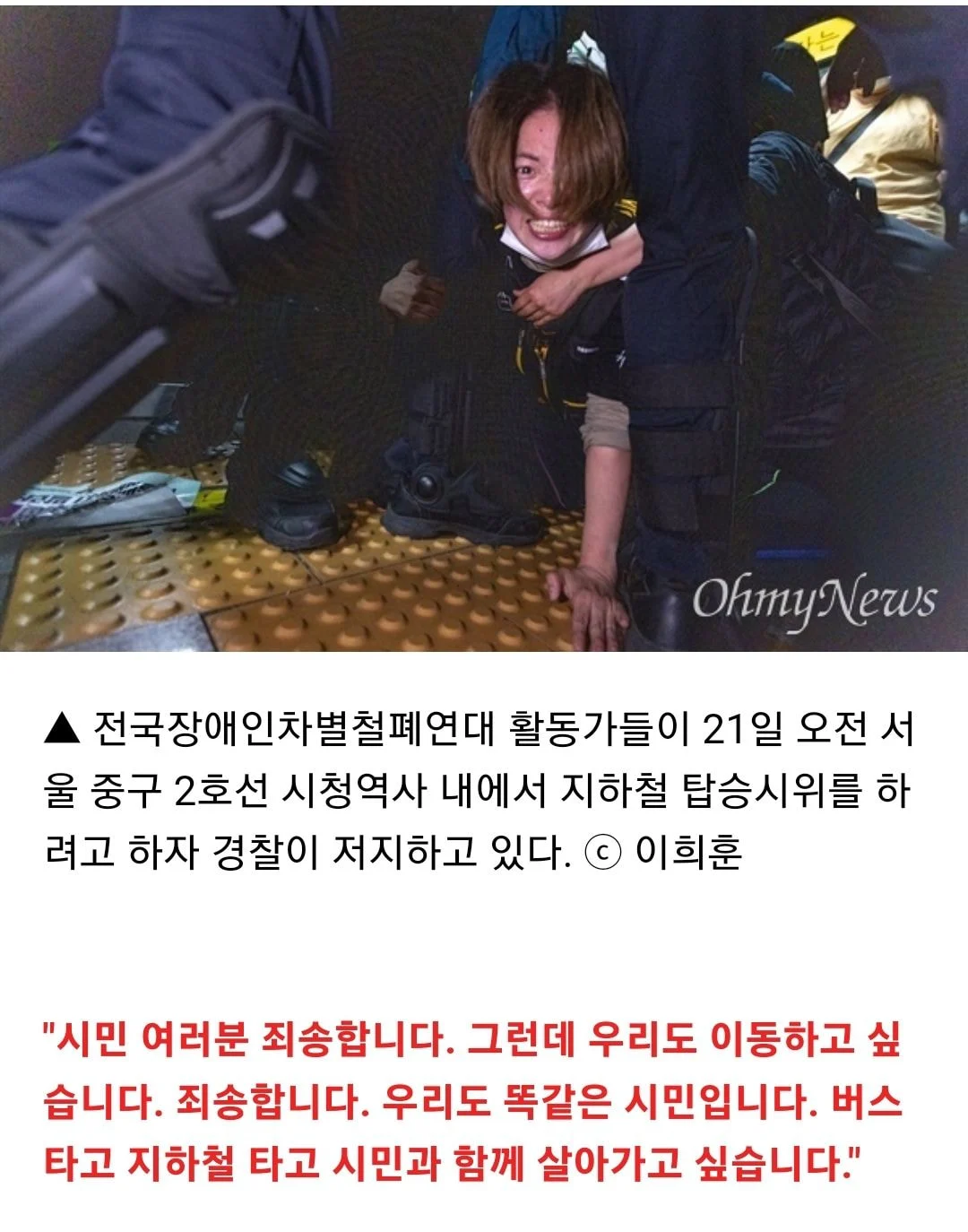 “”I’m sorry, citizens. But we also want to move around. I’m sorry. We are the same citizens who want to take the bus and the subway like you.”
[taken from yna.co.kr]
A disabled advocacy group caused delays in train operations in Seoul on Thursday morning as it resumed daily rush-hour subway riding protests, slamming policy suggestions by President-elect Yoon Suk-yeol’s transition team for people with disabilities.
Members of Solidarity Against Disability Discrimination (SADD) staged demonstrations at Gyeongbokgung Station on Line 3 and City Hall Station on Line 2 in central Seoul from 7 a.m., getting off their wheelchairs and crawling on train floors.
Some subway users expressed frustration, asking the protesters to stop.
Operations were normalized at around 8:50 a.m. on Line 3 and 9:28 a.m. on Line 2, according to Seoul Metro.
The move came 22 days after SADD halted the subway protests they began late last year and turned to a daily head-shaving protest campaign following the presidential transition committee’s promise to review the group’s demands, according to its officials.
SADD has been demanding measures to improve mobility rights and secure budgetary funds for disability rights in the 2023 fiscal plan.
On Tuesday, the transition team said it will review changing city buses to non-step ones, expanding ride-hailing services for disabled people and installing at least one elevator per subway station as part of its policy on disabilities.
“The transition team is just saying the same thing two major political parties have been repeating for the past 20 years when they were in power,” Park Kyoung-seok, co-head of SADD, said, adding it did not receive an official response.
SADD called upon Rep. Choo Kyoung-ho, who was tapped as finance minister nominee, to give an official answer to its demands at his confirmation hearing on May 2, saying the group will stop the daily protests if Choo promises to do so.
source: http://www.ohmynews.com/NWS_Web/View/at_pg_w.aspx?CNTN_CD=A0002828242
t/n: more FIY
original post: here
1. F*ck what is the government doing? Stop claiming we’re an advanced country and start paying attention to welfare
2. I support you. Please improve the transport system for disabled people
3. We shouldn’t be fighting between ourselvesㅠㅠㅠㅠㅠㅠ  Of course it’ll be uncomfortable for us for a few days, but the survival of these people are at stake. Of course it may look excessive, but the media will never pick this up otherwiseㅠㅠㅠㅠ
4. I support you. Please make welfare better for the sake of disabled peopleㅠㅠ
5. In Europe, they have trambus and subways that allows you to go freely with your wheelchair, that’s why they’re the top…
6. A country cannot claim they’re advanced when they consider even moving around to be a right to be gained..
7. Ah the pictures break my heart. I seriously support youㅠㅠ
8. You need to guarantee us the right to move around for everyone. Anyone alive can become disabled one day, stop pretending like this will never be your issueㅠ
9. You’re telling me that we still need to fight for our right to move in 2022?
10. Thank you for protesting. I support you
theqoo