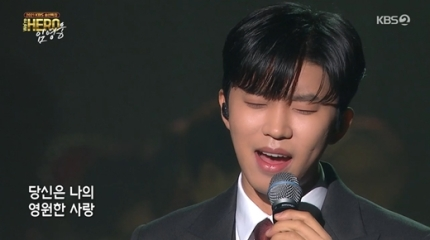 KBS 2TV Im Youngwoong’s solo show ‘We’re HERO, Im Young-woong’ was broadcast on the night of the 26th. According to Nielsen Korea, an audience rating research company, the broadcast on this day recorded an audience rating of 16.1% based on households nationwide. This is a higher number than expected.
[…]
original post: here
1. Isn’t the show usually 4% originally? This is daebak ㅋㅋㅋ
2. Imagine being a young singer who’s only 6 years into his debut and holding a 150 minutes show by himself with 16% viewership… Thinking about this again makes me realize how daebak he is
3. Daebakㅋㅋㅋ  This is why being f*cking good at your job is the best
4. Im Youngwoong is daebak. As expected from god-Youngwoong. His stage yesterday was also perfect, he’s just a singing god at this point. And he has awesome charms. This was a show were everyone joined Im Youngwoong’s fandom
5. I even left my job earlier to watch the show, this was so good. I really hope they would rebroadcast it ㅠㅠ
6. All of those year-end shows only hit 1-5% viewer ratings on public TV, if you compared him with them, you know how daebak he is. With the fact that so many more singers attended the other shows too
7. Crazy 16%? Hulㅋㅋㅋㅋㅋㅋㅋㅋㅋㅋㅋ He did freaking well….
8. 16% is just wow, but people are comparing him to Tes Hyung? That should be an honor to Im Youngwoong (t/n: a lot of Inets may not know this, but the biggest trot singer in Korea is unarguably a man called Na Hoon-a, he sang the hit Tes Hyung this year. A lot of people in the comments are comparing him to Na Hoon-a)
9. People are actually comparing him to Na Hoon-a…? Im Youngwoong has only been promoting for 1~2 years, with the success he has, he’s already hit super daebak
10. Just hitting 10% is already daebak, but 16% is super impressive. Why are people talking about 30%? There’s not a single drama that can even hit 30% nowadays anymore